Covered Dish Suppers and Knowing the love that surpasses knowledge 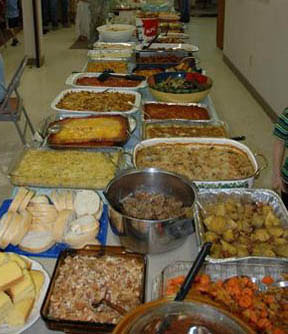 So, in just a few weeks I will have lived in northern New Jersey – with the tri-cities of Madison, Chatham, and Morristown as my locus of operation – longer than I’ve ever lived anywhere in my life. Even after these five years, however, I continue to experience culture shock. No matter where I go, or how long I’m away, I’ll always be a kid from Louisiana out on a wild adventure in a strange land.

Culture shock presents itself in some unusual ways: being chastised for holding a door or saying ‘yes ma’am’, not finding the spices or coffees or foods that I require in my local grocery store, driving anywhere…

But lately I’ve been noticing another kind of culture shock: Potluck Suppers. They’re a staple of church life in the South. We call them ‘Covered Dish Suppers’, but the principle is the same: everyone in the community agrees to come together to share a meal. Everyone brings a little something and it adds up to a feast. Perhaps there’s some programming or event around which the meal is centered, but not usually. Usually, it’s just about the meal and the community and the miracles that abound when the two are allowed to blossom into a celebration.

I guess the primary difference between ‘Covered Dish Suppers’ in the South and ‘Potluck Suppers’ in the North is that y’all seem to feel the need to plan it all out. Potluck Suppers, as least as I’ve experienced them in New Jersey, tend to involve sign-up sheets and pre-planned commitments about who will come and who will bring what and – God forbid – sometimes even a collection basket for those who didn’t bring anything.

Covered Dish Suppers, on the other hand, tend to be a bit more informal. Sure, we all know Miss Eula Mae is gonna bring her 7-layer coconut cake, so we don’t bring that, but everything else just kind of happens. Yeah, there may be two trays of deviled eggs, but everyone’s deviled eggs are a little different, so it can’t hurt. And it’s true, tuna casserole with that corn flake topping doesn’t really GO with pot roast, but who cares?!

Covered Dish Suppers aren’t about planning a meal; they’re about making space for grace. It doesn’t work out as neatly as if it had all been planned ahead of time, but works out all the same.

It never really adds up. Everyone is asked to bring enough for themselves. Some people don’t bring anything. Everyone eats more than their share, and there are always leftovers. It just doesn’t add up. We can’t know how it works, but we know it works.

For me, this is the function of the miracles in the story of Jesus: they remind us not just that there are unknowables in this world, but that through the grace of Christ, they can be known. In our post-modern, western culture we compulsively try to explain away the unknowables in our lives. We can be pretty imaginative in our attempts – explaining how the parting of the Red Sea might have been a drought followed by a flash flood, or explaining away the empty tomb by saying either that Jesus didn’t really die or that his body was stolen.

We do this because miracles make us uncomfortable. Miracles are unknowable and nothing makes us quite as uncomfortable as those things that surpass knowledge.

Over the more than 20 years that this celebration has been happening, the Integrity Eucharist has grown from a nearly secret gathering of about 40 people to this year’s grand affair with more than 1,200 worshippers boldly proclaiming the grace of God’s inclusive love.

One of the most moving moments of the service for me happened during the administration of the sacrament. No one had expected such an overflowing congregation, and there simply wasn’t enough planned music to cover the time necessary to get everyone fed. Probably without really thinking about it, and maybe even out of a little desperation, the music director began playing “Jesus Loves Me” on the piano. With the accidental nature of a Covered Dish Supper the congregation erupted into the most spirited singing of that Sunday School hymn that there ever was. These once-upon-a-time outcasts who had once begged, “Jesus loves me” as a plea to the church, were now singing, “Jesus Love Me” as a proclamation to the church.

Of course most of this congregation isn’t Lesbian, Gay, Bisexual, or Transgender. And neither is most of The Episcopal Church. So it might be tempting to abandon the work that Elizabeth and I did at General Convention as “just political”, or even worse: “too political”. But it’s not. Our work was political, but it was also a lot more. It was about knowing the love of Christ that surpasses knowledge. It was about every member of this church having the chance to know the truth that “Jesus Loves Me” even when the sum of those words doesn’t seem to add up against the whole of any of our lives.

Look within yourselves. In those loneliest and quietest moments of the night, aren’t there times for you, too, when “Jesus loves me” sounds more like a plea than a proclamation? Aren’t there times when doubts and fears seem overwhelming and the love of Christ seems unknowable?

Andrew, looking at the five loaves and two fish available for the feeding of the five thousand, said to Jesus, “What are they among so many?” Or as one commentator paraphrased him, “How can the tremendous need we see be met by so small an offering?”

But here is the secret: our offerings are always small. The needs of the world are always great, and our offerings to meet them are ALWAYS small in comparison. But through God, as revealed in community, our offering, though seemingly insignificant, is sufficient. It doesn’t quite add up, but the unknowable becomes known.

Like a proper Covered Dish Supper, we don’t need to plan out all the details. The end result almost certainly won’t be perfect, but it will always be sufficient and even abundant. And sometimes it will even be perfect.

Like the abundant love of Christ showered on all of us who don’t deserve it even a little, life doesn’t always add up right, but it divides up just fine. Amen.
just me New Jersey St. Paul's; Chatham