General Convention 2009 - from my perspective 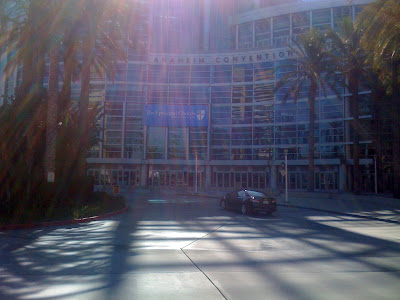 Well, I'm back in New Jersey after two weeks in Anaheim, California for the 76th General Convention of The Episcopal Church. My body isn't quite ready to be back on East Coast time, and I'm not entirely sure my heart is either.

You see, I'm one of those weirdos that REALLY likes the church's political life. I think the chaplain to the House of Deputies, Frank Wade, said it best when he reminded us that political and liturgical share similar etymological roots - they both have to do with the work of the people.

So I mourn the close of GC2009 - the legislative accomplishments, the relationships renewed and newly formed, the thrilling worship, and all the rest... And while it's still fresh, I'll offer some reflections.

I didn't have much time for posting during the Convention - only a few quick posts here and there. So now I'll offer a recap of my experiences through some pictures and captions.

I hope you enjoy! 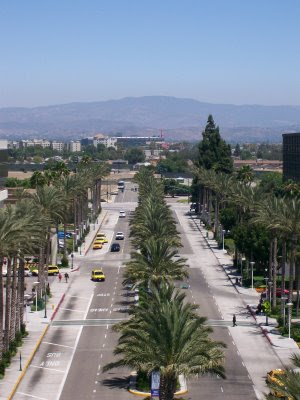 Here's the sight from just outside the House of Bishops on the third floor of the Convention Center in Anaheim. Palm-lined streets and mountains just to the west. I need mountains now and then, so it was therapeutic for me to have them so handy! When I got tired or frustrated, I just spent some time with the mountains. 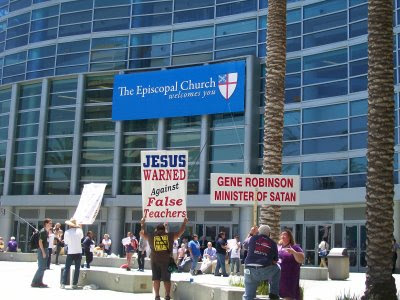 Wherever there is General Convention, there, too, shall be fundamentalist protesters. I don't actually mind protesters. At one level I think they're funny. At another, I find them oddly inspiring. It takes real commitment to go to a convention of thousands of Episcopalians to argue that The Episcopal Church is of the devil. I mean, this was a gathering of some of the most committed members of the church. You'd think there'd be a slightly less tough row for them to try to hoe!

I took several pictures of the protesters. This was my favorite - their message of hate juxtaposed against the "The Episcopal Church welcomes you" sign. And they were welcome. In all the times I saw them, I never saw anyone treat them with disrespect. They were strongly disagreed with, but they were always welcomed and respected - at least as far as I saw. 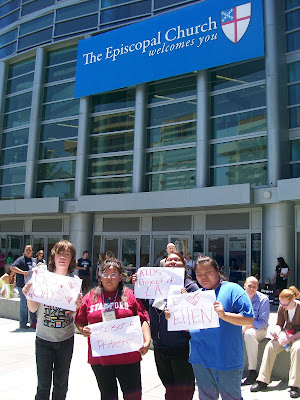 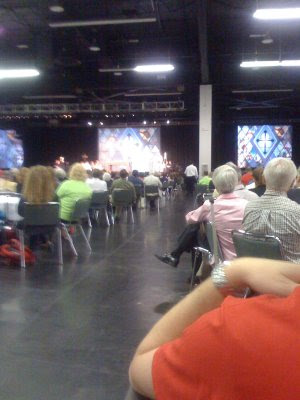 One of the highlights of convention is always the daily Eucharist. It's just thrilling to worship with thousands of Episcopalians all at once - an experience most of us don't get that often! Early in the convention the Archbishop of Canterbury joined us and preached in the liturgy. Here's my best picture of him. He's in there, I promise! 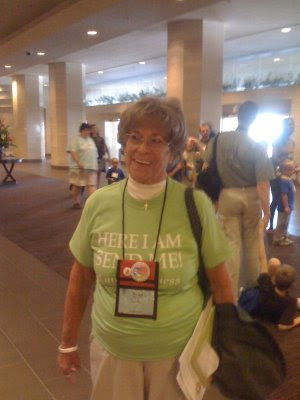 In response to the ++Rowan's visit, Integrity organized its supporters to have 500 multi-colored t-shirts worn in worship that said, "Here I Am, Send Me! I am a witness to God's inclusive love". The message was that we are not in the church as an albatross, but as witnesses to the love of Christ.

So this picture is of none other than the blessed Marge Christie - long-time Deputy from my own Diocese of Newark and fierce, early advocate for both women's ordination and LGBT inclusion. 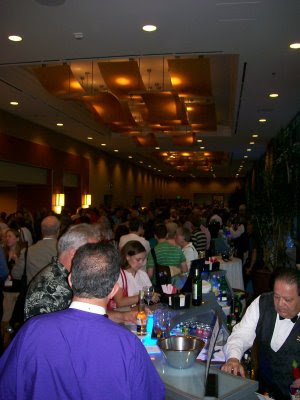 Speaking of LGBT inclusion - here's the reception for the Integrity Eucharist. It's one of the most highly anticipated events at each General Convention and this year it broke all the records! We were actually on-site at the Convention Center and drew more than 1200 worshipers. 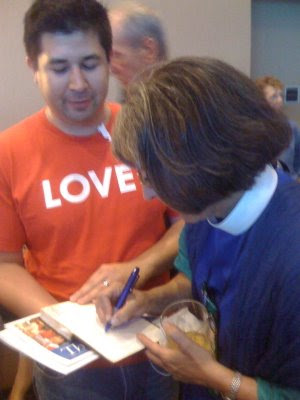 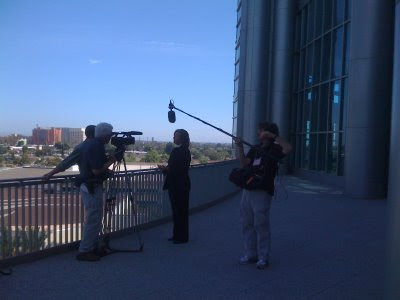 Here's my friend, the VERY Rev. Dr. Katherine Hancock Ragsdale, brand new President and Dean of Episcopal Divinity School, doing an interview with the team from Reveal Productions - a company doing a major documentary on Bishop Robinson that will be aired on PBS in 2011. 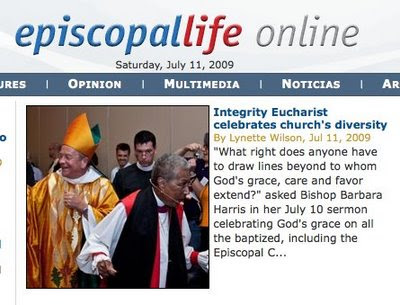 The day after the Integrity Eucharist, we made headlines in all the Episcopal media (we're really getting mainstream, huh?!).

Bishop Gene Robinson presided at the Eucharist and Bishop Barbara Harris (first woman to be ordained a bishop in the Anglican Communion) was the preacher.

And did she preach!

Whenever Bishop Harris decides to say something, you'd be wise to listen, and this sermon was no exception. You can watch the full sermon HERE (and soon on DVD from IntegrityUSA).

Though I've already blogged the "money quote" of the sermon, it's worth blogging again! Bishop Harris said:

"If you don't want GLBT folks as bishops, don't ordain them as deacons.
Better yet, be honest with them and say we don't want you, you don't belong here,
and don't bestow upon them the sacrament of baptism to begin with.

How can you initiate someone and them treat them
like they are half-assed baptized?" 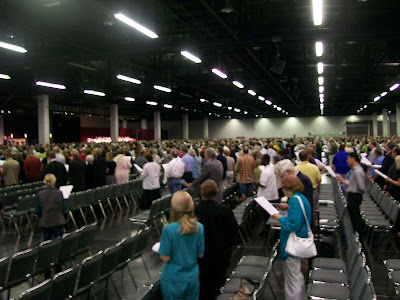 On the Sunday that is encompassed by General Convention is always the principle Eucharist of the gathering. Thousands of visitors come from the surrounding areas. 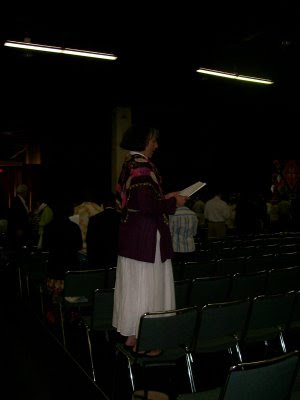 Elizabeth will probably tell you that she was standing on her chair to see over the crowds in this shot, but I have a sneaking suspicion that she was actually becoming slain in the Holy Spirit. I think that if my flash had not distracted her, she may well have begun pew running! 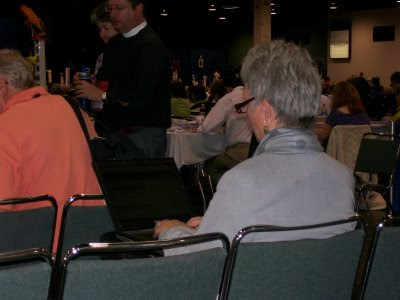 But General Convention was not ALL worship and beautiful scenery. The vast majority of the time was spent inside the Convention Center at Legislative Sessions and Committee meetings. Additionally, we on the Integrity team, did a lot of work in every spare moment we could find.

Here's the Rev. (and very-nearly-Canon) Susan Russell blogging from the gallery of the House of Deputies. And here's the Rev. Dr. Cameron Patridge, of TransEpiscopal working on some background to help one of the committees he was working with to understand and communicate about issues related to transgender Episcopalians.

This guy is SO smart that it takes TWO computers to keep up with his mind!! 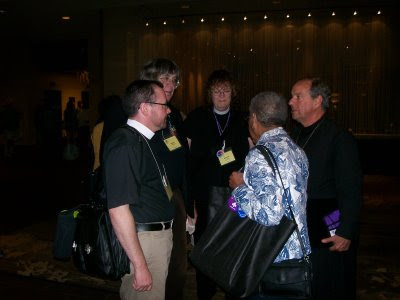 And here is some of the leadership of TransEpiscopal caucusing with Bishop Thomas Shaw, SSJE and Bishop Barbara Harris. 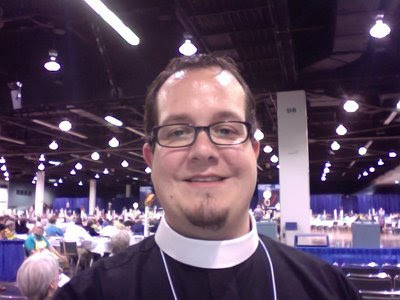 In case you haven't figured it out by now, I'm a big ole legislative nerd. I really love this stuff! So just to prove it, here's a picture of me with the House of Deputies in the background.

Yep. That's gonna be my primary profile photo for a while to come... 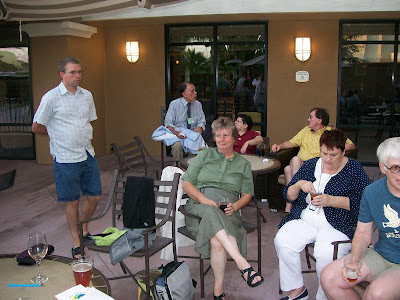 Our work was very successful. With a team of 30 full-time volunteers, countless other part-time volunteers, and throngs of supportive Bishops and Deputies, Integrity was able to achieve all of its legislative goals. We have successfully moved beyond 2006-B033 and its de facto moratorium on the election and consecration of additional openly-gay and partnered bishops for our church. We have made MAJOR strides forward on the road to marriage equality. In addition, we also helped to pass legislation to guarantee non-discrimination in lay employment in the church, legislation that puts The Episcopal Church on record in supporting LGBT equality in immigration regulations and practices, and a few pieces of legislation specifically in support of transgender rights in the church and society.

So with all of that success, we needed a night of celebration! We had some great time for debriefing, a nice dinner, and even more time for enjoying our last night together after it was all over. 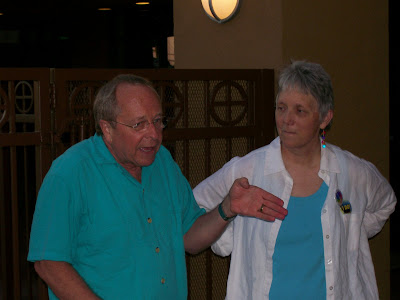 Among others, we had one particularly special drop-in guest. Bishop Gene Robinson, despite missing the last day of Convention because of a flu, stopped by to thank us for our work and to offer courage for the road ahead.