Belonging in the Reign of Christ 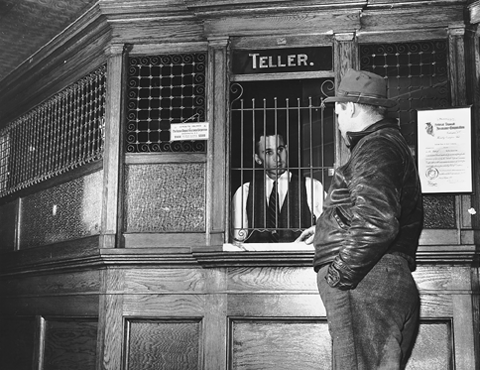 In the name of God, the Almighty: who is, and who was, and who is to come. Amen.

One of the ways that I made my way through college was as a bank teller. I loved it. While my friends worked in malls or at restaurants and had unpredictable hours and worked on holidays, I had a set schedule. And though I didn’t make as much money as many of my friends, I always knew how much I would make – I wasn’t dependant on tips or sales quotas or anything like that. I just showed up when I was supposed to and counted money.

It was satisfying work. I could look back at the end of the day and see the thousands of dollars that had come across my desk, the hundreds of transactions that I would perform, and as if by magic, it almost always added up. And on those rare occasions when it didn’t, it would always become clear what had gone wrong in the days ahead: some paper misfiled or some rogue number inverted.

I worked for two rather small, locally owned banks that both, while I was working at them, “merged” with larger, more corporate institutions. In both cases, the new corporations brought with them better pay, better benefits, and new technologies that made my work even easier.

At the second bank I worked for, I worked as a floating teller. Each day I would get a call telling me where I was to work for that day. I filled in for other tellers who were out sick or on vacation, and I rarely worked at any one branch for more than a few weeks at a time. It appealed to my burgeoning wanderlust, even though I was only traveling within a few dozen miles in a corner of southeast Louisiana. I enjoyed having the opportunity to work with a variety of people and in a variety of markets. There were the typical suburban branches, but I also got to work in downtown branches, rural branches, and branches on what most would have called “the wrong side of the tracks”.

I remember in particular the Plank Road branch in Baton Rouge. It was in an impoverished neighborhood very much on the “wrong side of the tracks”. There were off-duty police officers stationed at the branch at all times – mostly to keep the homeless people from loitering and drinking all the coffee. But it gave my time there a sense of adventure.

I loved the ladies who worked in that branch. They were from the neighborhood, but had “made good”. They were somewhat looked down upon by the rest of the bank, but in this little corner of the kingdom, they were on top – respected in the community as some of their own who had risen above.

One of my first customers at the Plank Road Branch was an older, African American woman named Mrs. Jackson. I forget exactly what it was, but the transaction that she was requesting was something perfectly innocent, but that required a variation from our normal corporate policies. Policies were rigid things meant to protect the bank – and me – from the customers.

I’ll never forget Mrs. Jackson’s face when I refused her transaction. She wasn’t angry, but seemed to be hurt, more than anything. She looked at me with sad eyes and said, “But I’m a member of this bank!”

I had been trained to see myself – in my capacity as a teller – as belonging to the bank. As one who belonged, it was my duty to protect the bank from all those individual invaders on the outside.

But Mrs. Jackson saw herself differently. Through years of coming to the same building and building relationships with the same people, she saw herself not as an outsider – not even as an individual, but as one who belonged – part of the body of that institution. She saw her relationship with the bank as corporeal as my own. Through all of the corporate transitions she had not been trained in her new role: she saw herself as a member, but it was my job to dis-member her – to make her into an outsider.

Mrs. Jackson was from a different time in the life of that institution – a time when people belonged. And while she asserted her belonging, I worked to cut her off – to make her no more than an individual. 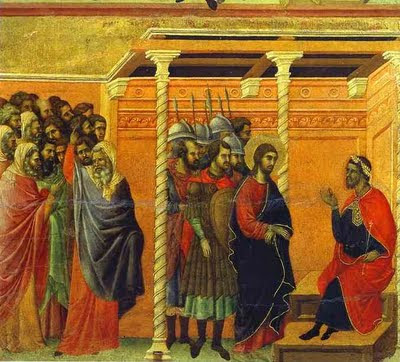 It’s not unlike the story that we hear in the Gospel lesson today. As was the case with Mrs. Jackson and me, we hear Pilate and Jesus engaging in fundamentally different understandings of belonging. In the arraignment, Pilate seizes the issue of belonging to determine the charges against Jesus. As the designate of the Roman Emperor, Pilate knows to whom Jesus belongs. Or at least he thinks he knows. The question is, to whom does Jesus believe that he belongs – or perhaps more importantly, who does Jesus believe belongs to him?

It’s no wonder that this passage should come across as sounding kind of confusing. Jesus is answering questions that are different from the ones that Pilate is asking. They are coming from such different perspectives that they are only barely speaking the same language.

Jesus is accused of insurrection. To determine the validity of the accusation, Pilate presents Jesus with the only two possibilities that he can imagine: are you claiming to be a king in opposition to the emperor, or do you belong to our kingdom? Jesus’ answer is beyond Pilate’s ability to imagine: “My kingdom is not from this world.”

Today, in the church calendar, on the cusp of a new liturgical year, we find ourselves in a position not unlike Pilate’s. We celebrate today, the idea of the Reign of Christ. But our culture is centuries removed from any experience of this kind of monarchy. Even in those Western societies where monarchs still exist, they are by no means the kind of absolute monarchy that would have posed a serious threat to the Roman Empire.

Though we don’t have a common language to speak about this kind of ruler or monarch, what we can understand is the same kind of thing that Mrs. Jackson understood – something about belonging. In proclaiming the Reign of Christ we are saying that we belong. 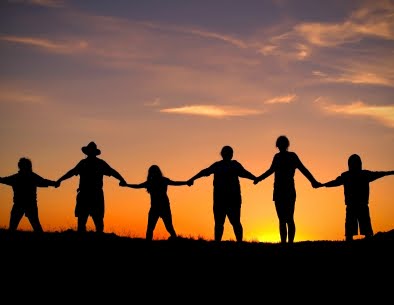 So much of our culture tries to dis-member us – to make us individuals. Individuals are so much easier to control than members of a Body that is greater than its parts. Just as I participated in a system that tried to dis-member Mrs. Jackson, so, too, are all of us tempted by different kinds of participation in the cult of individualism.

Christianity is about belonging. And belonging is never about individualism. It is about recognizing the myriad of ways that our existence is tied up in one another. In proclaiming the Reign of Christ, we are proclaiming our belonging and our membership.

Like Mrs. Jackson, we are called to claim that membership. Amen.
St. Paul's; Chatham