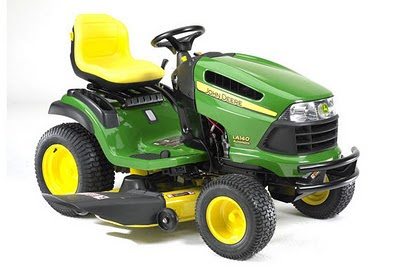 I remember my fear and disappointment when my parents first told me that I would be going to Kindergarten. It wasn’t that I didn’t want to go to school – both of my parents worked so I had been going to preschool for as long as I could remember. The thing was, to my four-year old mind, Kindergarten sounded like something I wanted no part of.

My father was – I’m pretty sure – born a city boy, but the thing was, he grew up in the country. So while he was always more comfortable once he left that small town of his childhood, there were tools of that lifestyle that he carried with him, even into the cities where I grew up. And while he eagerly left the “country life” for the opportunities of cities, I think there was a piece of him that always tried to have it both ways.

Our suburban houses with small yards always had something of the feeling of a farm – at least in miniature. No matter how small our yard, Dad would insist on having a riding lawn mower. Moreover he would insist that it be referred to as a tractor. One of our first tasks whenever we moved to a new place was to put a shed out back. And that shed would be called the barn. Not long after that a piece of the back yard would be partitioned off. On these ten square feet of earth, my father would put in his “crop”.

The crop was my least favorite part.

It always seemed to require a lot of work, but never seemed to pay off quite enough to make it seem worthwhile for me.

So this was my angst about Kindergarten. It was a big, strange word, but the one part I did recognize was “garden”. I was convinced my parents were sending me for some kind of agricultural training so that I could do more work in the garden at home, and I wanted nothing to do with that! 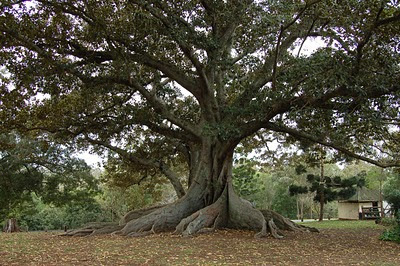 Though, with all of this talk about trees and bushes in the lessons today, a little agricultural training might just have come in handy.

In the Gospel lesson we hear the parable of the fig tree. It consumes the earth but has nothing to show for it. It doesn’t bear fruit. The owner of the tree, exasperated from three unfruitful seasons, tells his gardener to cut it down. “Why should it be wasting the soil?”

But the gardener intercedes for the tree. Give it one more year. Let me feed it and work with it, and perhaps then it will begin to bear fruit. If not, then we’ll cut it down.

At the other end of the scale we have a bush. 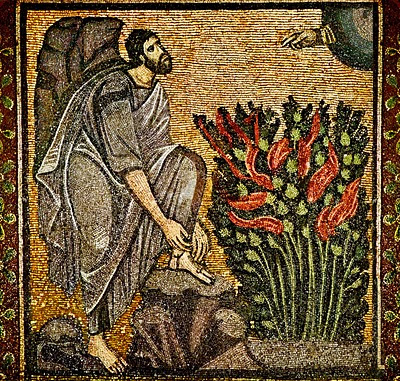 Moses is tending to the flock of his father-in-law in the wilderness. Wandering through the hills and the sparse vegetation he comes upon a peculiar bush. Clearly it is on fire – there are flames leaping from it, yet it is not consumed. It is a vehicle for God’s communication with Moses.

So a dichotomy is set: a tree that sucks the life out of the good earth with nothing to show for it, and a bush – largely useless to Moses on a normal day – but on this day, hosting a flame that speaks the salvation of God’s people, though does not consume.

There was a lot that I didn’t learn in school. To my delight, I didn’t learn very much at all about agriculture; but, I also didn’t learn much about economics. What I do know, however, is that from the vantage point of our consumer-based economy, neither of these stories makes much sense. How can this bush be so productive without being consumed? How can one justify keeping a tree that has shown itself to be of no use for three years? Why waste more time and energy on something so unproductive?

It reminds me of the quote from Gail Godwin’s book, Evensong. She says, “Something is your vocation if it keeps making more of you.”

This “making more” in churches usually has a numerical side effect, but the numbers of average Sunday attendance, membership, and pledges are not what the “more” is really about. By coming to know their place in the world – by hearing and responding to God’s call – they are more, not just in their numbers, but of themselves. Their spirits are richer. Their relationships with God and with each other are richer.

There’s a very fine line between the consumer-based economy of the world and the regeneration-based economy of God. While God is calling us to identify those ways of life that make more of ourselves, the world is seducing us into habits of making more for ourselves.

But God’s call is about abundance, not acquisition. Acquisition is the inverse of spiritual abundance.

We are told that more stuff will make us happier – that it will make us more. But that’s a lie. Acquiring more stuff only gives us more stuff. Of course it’s possible to both be happy and to have stuff. But acquisition is nowhere near the principle ingredient in the happiness recipe. It is, at best, a garnish. Abundance is much more central.

Unknown said…
An interesting sermon. I always thought the fig tree had been neglected and that with a little tender feeding and tending it could be fruitful. I know many people that have been neglected by the church or abused by the church and I think of how productive they could be if some just gave them a bit of food, the word of God, and pruning. As for the burning bush, I always viewd it as alive with the holy spirit like some priests and people that make you think about God.
March 7, 2010 at 8:20:00 PM EST

Jon M. Richardson said…
Thanks for reading, Kathy. I appreciate your thoughts about how the parable might be applicable to evangelism. I'd love to read that sermon!
March 7, 2010 at 8:47:00 PM EST

Jon preached 'But God’s call is about abundance, not acquisition. Acquisition is the inverse of spiritual abundance.'

I shared your sermon with a shanga buddy who blames me for his 'hungry fascination with the Anglican experience.' And he came back with the question for me- how is it that Christians are many of the poorest people he knows- with all their aquasitions, imperialisms and interventions... Which got us talking about 'empire' and our Lord's experiences with organized religion, which in turn has him now hunting through the BCP I gave him for 'signs of poverty thinking'.

All this from your sermon.

Jon M. Richardson said…
David - thank you! Perhaps the best compliment any preacher can earn is to know that a sermon has inspired discussion.

Your friend won't have to hunt for long to find "signs of poverty thinking". When he comes back to you with the Magnificat in hand, point him to the story of Jonathan Daniels! :)

For an interesting discussion of Christianity and empire - particularly in an American context - check our Catherine Keller's "God and Power: Counter-Apocalyptic Journeys"