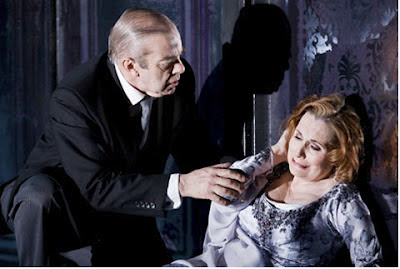 Know someone working the show?  No.

Synopsis: Imagine a sequel to The Phantom of the Opera -- something AFTER Love Never Dies -- so far after that Christine Daae has somehow become Norma Desmond (Sunset Boulevard) - a has-been opera star planning a "return".  Got the picture?  Then you've got the whole story line to Prima Donna.

My thoughts: Part of how that synopsis came to me was, I kept swearing I was hearing Andrew Lloyd Webber in the score - far more than I could hear what I recognized as Rufus Wainwright.

While I admitted in my introductory post that I'm boldly stepping out on this journey with the full knowledge that what I don't know about the theater far eclipses what I do know, I should admit upfront in this post that I know even less about opera.  Even so, some thoughts and observations emerged.

Throughout the show time seemed to pass very quickly.  It had been a long time since I'd seen an opera, so I feared that I'd be bored.  It's been a bit of a busy week, so I was even a little nervous that I might fall asleep.  As I mentioned above, my seats were incredible!  I was in the second row on the center aisle.  It couldn't have been better!  But falling asleep would have been pretty embarrassing!  Fortunately, that was never even a temptation.

The first act opened with a beautiful and delicate overture that slowly dawned into something more.  During most of the first act, however, my attention seemed mostly focused on technical aspects of the show.  Most of the music was fine, but was not very engaging.

The set was peculiar.  It could best be described as a kind of sheet metal damask.  It was interesting in that it reflected different lights at different times in some interesting ways, but at times it was almost painful.  Strike that.  It was ACTUALLY painful.  There were an ornate set of doors (stage left) that opened and closed periodically and were to be the main entrance to the main character's house.  Furthermore, they were lit from the wings.  Due to the reflective nature of the doors, each time they were moved there was an excruciatingly blinding light.  It happened with such frequency that I learned to close my eyes throughout the show any time someone made their way toward them.

One of the things that I've learned about the theater over the last several months is that the theater and the stagecraft itself shouldn't be distracting from the performance.  We shouldn't hear sets move.  We shouldn't be thinking about the lights - that is, they should be designed to enhance the experience, not (generally, anyway) steal the show!  Theater has the power to transport you to another world.  Distractions can take all of that effort and render it dead.  So one of the harshest criticisms that I could make of any aspect of any show would be that some aspect of the show was distracting - it kept me from immersing myself into the world that is being created for me.

Being blinded by the sets and lights is the perfect example of such a distraction.

Otherwise, the lighting was interesting.  It was understated, to be sure, but occasionally a soft glow would emerge, reflected on the metallic walls of the apartment - as if the damask were a kind of mood ring sharing the aura of the apartment with audience.  It was an interesting effect.

The opera was performed in French with English super titles.  While I've studied French, and can hold my own, it was helpful to have them there.  Throughout the first act I kept noticing that the projected words were wildly out of sync with the performance.  As the show progressed, however, I relied less on the super titles, so the distraction waned.

The second act was much more enjoyable.  The score grew increasingly creative, and several of the performers began to shine.  Most notably among them was Kathryn Guthrie Demos in the role of Marie.  Her first aria in the second act blew me away.  For the first time in the show, I really began to see what she was capable of - and it is quite a lot!

The other performance that really blossomed in the second act was that of Taylor Stayton, the young tenor in the role of Andre Le Tourneur.  Le Tourneur is a journalist who has come to interview Regine Saint Laurent in advance of her return to the stage.  He also happens to be a great fan.  He also happens to remind her of the man she played opposite in her last (and next) role.  In the second act she listens to the recording of that final performance and is transported back into it.  Her apartment becomes the set of that last great performance and Stayton's character emerges as the king to her queen.  It's in this context - the opera within an opera - when Stayton shows his true vocal brilliance.  I found myself wishing the scene was the actual show!

As Saint Laurent's apartment became the set of the other opera, Prima Donna developed some much needed depth.  From this point the music grew increasingly interesting and the characters each developed into something worth seeing.