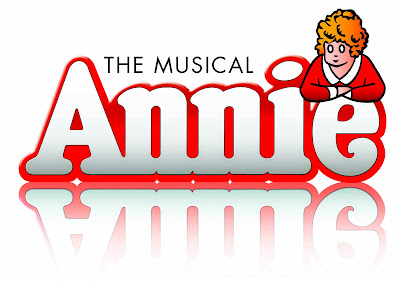 Quick facts:
Synopsis: The musical tale of little orphan Annie - from the old comic strips, and the old musical, and the two film versions.

Sadly, however, for a show this iconic, and for Broadway, great is the bottom line.

I was very excited to see Jane Lynch cast in the role of Miss Hannigan.  It seemed like inspired casting - and a thrilling opportunity to see the current reigning heir to legacy of Carol Burnett!  But sadly, while her performance was very good, it simply wasn't great.

I've heard a lot of hype about Lilla Crawford in the role of Annie - mostly that she was passed over for a Tony nomination.  But based on the performance I saw, I can see why she was.  Her singing is certainly strong, and she is, without question, a very talented child.  But her attempt at a street kid's New York accent from the 1930s was uneven, to the point of being a distraction.  The role would have been much more successfully executed if she hadn't tried to add an unnatural accent on top of everything else.

The projection designs by Wendall K. Harrington were sparse, and usually tasteful.  There was a moment in the song "N.Y.C." where it did go a bit over the top for a moment with some sort of abstract fireworks image, but fortunately that was a fleeting occurrence and not the norm throughout the show.  In the opening sequence, the newsreel projection was helpful in setting the stage for the story to follow, but unfortunately, it didn't play well with the set.  The opening "curtain" was a series of clotheslines holding an array of white garments, and they served as the screen for the newsreel projection.  But it was difficult to see it on the uneven surface.  When the "curtain" went up, each of the lines seemed to move independently - which was a satisfying effect - but it might have been worthwhile to have them move before the newsreel segment began to reveal a more appropriate projection surface - perhaps a bed sheet...

The remaining production elements were all lackluster.  Adequate, but not engaging.  Sufficient, but never evocative.

The set design by David Korins was a particular disappointment.  While there was a lot of movement, it never transported me.  Every scene got the job done, but in uninteresting and unconvincing ways.  The orphanage wasn't convincingly slummy or dirty.  The Warbucks mansion wasn't sufficiently grand.  For a production of Annie on Broadway, and in a venue like the Palace, I'd expect something on the order of a Sunset Boulevard kind of set for the mansion.  Instead, it was a more like a large scale community theater production.

The one fairly clever element of the set design was a kind of room-sized storybook piece with "pages" that would turn to represent different rooms in the mansion.  Each page had doors that characters could walk through as if they were walking through room after room of the mansion.  It was a good idea, but again, it was presented on a bit too small of a scale to really be effective.  I found myself thinking things like, "Oh.  Look what they're trying to do.  Isn't that a good idea."  Not, "Wow! What a magical way to take me through the many rooms of the house!"

The most successful element of the set design was one brief scene in the White House.  Without attempting to present the space literally, the set conveyed the spirit of the space in conjunction with evocative use of lighting and perspective.  If the rest of the show had been designed with that much effective precision, it would have been an entirely different experience.

Despite the many elements of the production that felt underplayed, even so the quality of the writing and the joy of the story survived in the end.  There were many moments where I laughed.  Many moments were touching.  But it could have been (should have been...) so much more.