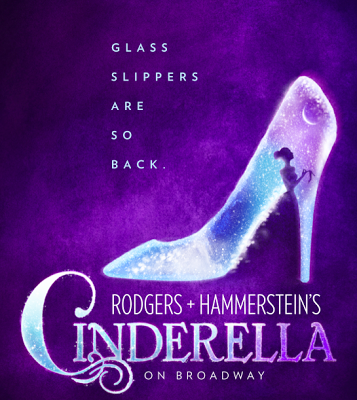 My thoughts: When Cinderella receives her invitation to the prince's ball from her fairy godmother, she says, "But it's torn!"  Her fairy godmother says, "Don't wait for everything to be perfect."  It's good advice in general, but for too many Broadway productions, it seems, the advice is taken a bit too liberally.  Fortunately, however, this production of Cinderella was already perfect.  There was no need to compromise at all!

I entered the performance with basically low expectations.  I expected it to be silly, overly saccharine, and generally un-fun.  Furthermore, I was disappointed in my plans for the evening, as the friend who was planning to see the show with me couldn't make it at the last moment.  So I had prepared myself for disappointment all around.

It wasn't long, however, before this spectacularly executed production transported me into the world of Cinderella.  I often wonder how much of my own baggage from a hard day or week, or preconceptions about a show that I'm bringing with me into the house might temper my ability to enjoy a show.  But this production proved that a strong show can rise above those kinds of things.

Every element of the performance and the production as a whole was simply perfect.

Laura Osnes, in the role of Cinderella, was simply a dream.  I've seen her (and have been mightily impressed by her) in the past - most notably in the role of Bonnie in the commercially unsuccessful but excellent production of last season's short-lived Bonnie & Clyde.  But Osnes seems to have been made to play Cinderella.  Her physical beauty glows on the stage, but in a familiar way.  Her singing is unmatched.  Something about her pulls you into rooting for her before you even really know who she is.

Similarly, Santino Fontana, in the role of Topher, the prince who will fall in love with Cinderella, seems perfectly made for his role.  He is handsome and naive, and just cartoonish enough without taking it too far.

Harriet Harris, of "Bebe Glazer" fame from the television show Frazier, seems mostly to be playing herself (or at least the role she's made famous), but fortunately, it also works nicely in the role of Madame, Cinderella's evil stepmother.

All of the stellar performances took place in the context of an also-well-oiled-machine of a production as a whole.

The sets, designed by Anna Louizos, were magnificent.  The transitions between the moving pieces and scenes, from inside Cinderella's house to the woods around it, to the prince's castle, and everywhere in between, were simply flawless.  I noticed the sets only insofar as I remained amazed by them.  They effectively transported me between the many places through which the stories were told.  The focus was never the sets, but they were always a star along with the performers.  It couldn't have been designed and executed any better.

The choreography, by Josh Rhodes, was delicate and elegant - always appropriate to the experience as a whole.

Finally, I must say a word about the stagecraft.  It's so easy for "magic tricks" on stage to go over the top (think Ghost: the musical...).  There's a fine line between amazing and eye rolling.  But in this story about magic, it was as magical as you'd expect.  The transitions between "Crazy Marie" and "Fairy Godmother" and between Cinderella the peasant and Cinderella to the would-be princess simply blew me away.  I actually don't know how they did it.  Usually part of the fun for me in watching these kinds of things is the figuring it all out.  But I was so transported by the entire experience that I wondered if it might actually be magic!

In conclusion, the production was far more engaging, transcendent, and thrilling than I ever might have imagined that it could be.  I don't recall a more magical night of theater, and not many that pulled me in to another world as completely as Cinderella!