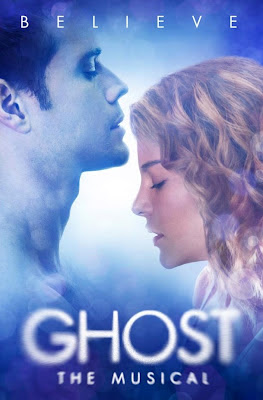 Synopsis: The musical adaptation of the 1990 film of the same name: a man and woman are in love.  The man is shot and killed in the street, but isn't able to move on after his death because of unfinished business.

My thoughts:  Earlier this week I was getting a haircut, and my stylist was trying to convince me to try out a new hairstyle.  I protested, fearing that her idea wouldn't cover what I wanted to cover and accent what I wanted to accent.  To defend her position she said: "The eye will go where the design is.  You don't just cover things up, you attract attention elsewhere."  With that, she had me.  She could try anything on me.  Because I knew she was right.

Tonight, as I was watching Ghost, it seemed that the same principle was in play.  The video and projection design by Jon Driscoll constantly stole focus.  They drew the eye to the ever-present design and movement and video.  They helped to cover any number of other sins.

The thing about Ghost is, it was already a movie.  And a really good one, at that.  Throughout this production I kept thinking that what I was watching was more a movie with a few live actors scattered in the midst of it, than a piece of live theater with videos and projections to enhance the experience.

It's worth noting that the first thing I write about - and probably what will prove to be the bulk of these thoughts - is video.  From before the curtain went up, the video was running and it never stopped throughout the show.  And it happened on nearly every surface.  Things were projected onto scrims downstage, all three walls of the set were giant video screens, and there were even projections onto fog.  Everything was fair game.

And again, as mentioned in a previous post, these strange dancing silhouettes made another appearance.  AHH!  I hope two instances doesn't point to a tend.  I won't be able to take it!

Video was used so extensively that it too often distracted from the actors.  Though, generally, the actors weren't particularly worth the focus.  I never believed Cassie Levy in the role of Molly Jensen.  Richard Flesshman, in the role of Sam Wheat, does have a nice voice.  The real star of the show, however, is Da'Vine Joy Randolph in the role of Oda Mae Brown.

Generally the original music was uninteresting.  Obviously the occasional appearances of "Unchained Melody" were crowd pleasing, but the rest of the score was bland and forgettable.  "I'm Outta Here" - Oda Mae's big solo near the end of the show, was, however, a nice scene.  It was a fun way to interact with the real star of the show as it was ending.

The set design was fantastic (though, interestingly, there isn't a designer listed in the Playbill.  Though there are two associates.  Again - calling on my more learned readers to help me here.  What's that about?).  Despite the fact that it served as more opportunities for overkill in the video department.  The three main walls moved and opened and turned in a variety of ways to create the somewhat elaborate spaces.  Their movements were graceful and interesting.  Whoever designed it - kudos!

Also, the video walls could occasionally be translucent, with video on the front and actors visible behind.  Though it's probably a very simple technique, it impressed me, and it provided opportunities from time to time for a great deal of flexibility - particularly in the subway scene.

The whole design of the show felt like a rock concert - particularly as it was expressed through the lighting.  Occasionally, the lights above the stage lowered into view - but it happened mostly in places where that didn't make much sense: in the office scenes.  I wondered if they were going for an "industrial" type feel as one might find in an office, but I didn't see it that way.  It was like a normal office on the ground, but a rock concert on the ceiling.  I just didn't understand the choice.  It would have been much more effective to simply leave the lights out of view.

The special effects and illusions, designed by Paul Kieve, were incredible - they were probably the real star of the show.  I had several "how'd they do that?" moments.