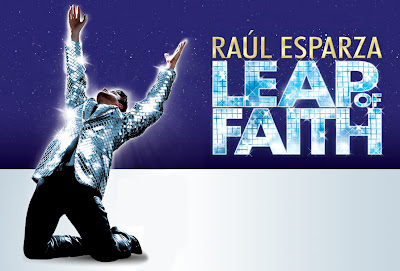 Synopsis: The stage version of the 1992 film of the same name.  A crooked faith healer's bus breaks down in a small depressed town in middle America.  He and the cast of his roving church decide to take them for all they're worth.

My thoughts: Leap of Faith probably won't be described by most critics as "great theater" or anything like that - and I guess it's really not.  But there is something about it.  It hits all the points it needs to hit, and it's truly effective.

The experience begins as soon as you walk into the theater.  I'm the dork who likes to get there the minute the house opens.  Some of my more sophisticated friends tease me about that, but I tend to be somewhat spatially oriented, so I like to get there with time to experience the space - to learn about my surroundings and to begin to immerse myself in the feelings that are being set up for me.  The house at Leap of Faith really got the stage set for me.  The curtain was a kind of circus tent design.  About 20 minutes before curtain, a Hammond organ began to play.  And just a few minutes before, members of the cast began wandering through the house getting the crowd riled up.  In reality, it was a bit silly, but it did help to establish the mood - and it established early on that we (the audience) had an investment in the show.  As such, the stage adaptation worked well.  They didn't simply try to perform what had been on film - they brought us into the world that had once been inhabited only by the film.

One of the defining characteristics of the show that kept emerging for me was its simplicity.  It's not that it wasn't completely high-end in production value, it's just that I never felt like the show was trying to beat itself over my head.  The set (designed by Robin Wagner), though moving and dynamic, was fairly simple.  At the beginning of the show - it was fascinating to watch the revival tent being pitched in front of us onstage.  The choreography by Sergio Trujillo cleverly conveyed the evangelical, revival community.  The lighting (designed by Don Holder) was effective at telling the story, passing the time, and subtly conveying moods, but always remained natural and organic.  The shining moment (if you'll pardon the mostly unintentional pun) in the lighting happened during "Jonas' Soliloquy" - the main character came downstage center before a black background illuminated only by a simple spotlight.  As the music swelled and the emotion ran deeper, slowly more spotlights began to emerge, until he was bathed in at least a dozen of them - coming from as many angles.  It was a simple, but thoroughly powerful effect.

The cast was truly outstanding - led by none other than the star himself,