My problem, of late, with the Second Amendment 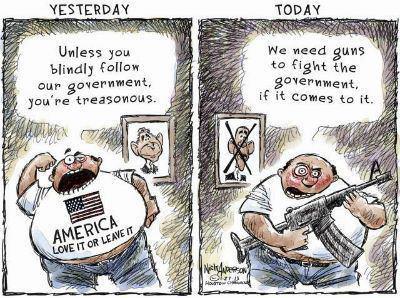 We’re now a week out from the election.  My sadness and anxiety remains pretty high.  This isn’t just about having lost – whatever: sometimes we lose elections.  But this time, we’ve lost more than an election.  This time, it feels like we’ve lost a lot more.  I fear we’ve lost civility (though, let’s be honest – a significant portion of our country lost that long ago).  I fear we’ve lost security.  I fear we are set up now to lose liberty.

Being from the South, a lot of the people in my life contributed to this loss.  Many have been very vocal about it.  I lost a lot of people that I thought were friends before the election happened, and I’m losing more each day.

I know it’s been said a lot on social media, but it remains true: everyone who voted for the President-elect and who claims to have people in their life that they love who are not straight, white, evangelical Christian men needs to explain to those people how they could have let this happen.  Don’t tell me you support gay rights if you voted for Donald Trump.  You don’t.  Your vote proves it.  Don’t tell me you oppose white supremacy and white nationalism if you supported Donald Trump – you were willing to look away from the overt racism that was at the center of the political rhetoric this year.  Don’t tell me you’re in favor of “Religious Freedom” if you support Donald Trump – that shows that you only support your own narrow freedom of religion, and that you intend to limit everyone else’s freedom.

There was a lot at stake in this election, and we lost.  We lost a lot – a lot more than just an election.

One of the most upsetting things that I’ve seen in the aftermath of this election is people comparing my fear now with the disappointment they felt in 2008.  I’ve seen it several times.  People have argued that their fear that “Obama would take away the guns” is the same as the fear that I have, and that people of color have, and that non-Christians have, and that women (at least women who support the rights of women) have.

I don’t know what to say to such irrationality - to such blind selfishness and insensitivity.  The media and public opinion have been quick to accuse those of us on the left of being “out of touch” with the concerns and values of “real Americans” (people who don’t live in major cities or on the coasts).  Maybe it’s true - maybe I am out of touch with them.  But it’s also true that those people are out of touch with my concerns and values.  And I’m a “real American”, too.

I can’t imagine how so many people can think it’s the same thing for me to legitimately fear losing actual civil rights as it is for conservatives to fear losing their guns.  I just don’t know how to respond to that.  Is my right to housing and healthcare and marriage and getting and keeping a job and not being imprisoned for sex between consenting adults and providing a loving adoptive home to otherwise unwanted children the same as their right to own a gun?  I don’t think so.  No one is, or has ever threatened those rights of the dominant classes.  Only people who are marginalized on the basis of race, sex, gender, sexual orientation, national origin, gender identity, or religion seriously face those threats.

What about the broader rights that we all – not just already marginalized people – risk losing?  Top Trump adviser Kellyanne Conway has been seen since the election threatening people who speak out against the incoming administration.  Is it okay to exchange your right to own guns with everyone’s right to free speech and to be informed by a free press?  To make that exchange would be shortsighted, at best, and it would very likely prove to be foolish.

“A well regulated Militia, being necessary to the security of a free State, the right of the people to keep and bear Arms, shall not be infringed.”

It’s terrible language.  If I handed in a paper to a professor in a college class with a similarly constructed sentence, I would receive a bad grade.  It’s easily confused, because it doesn’t actually say anything that makes sense.  But, for some reason, in our national discourse, we’ve addressed this confusion by simply ignoring the first clause and abiding only by the second clause. 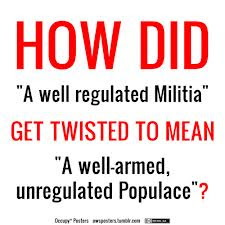 But what would it mean if we understood the second clause in the context set up by the first clause?  This would mean that the right of the people to keep and bear arms is not to be infringed BECAUSE it is to exist as a part of a well regulated militia.  Right now the militia – the would-be military of the people – is barely regulated at all.  There’s no rational argument to be made that it is “well regulated”.  If you want to support the Second Amendment, then support all of it, not just the part that lets you exercise your unfettered fetish for instruments of destruction.

Before you start squealing about your degraded Second Amendment rights (which is untrue), why not address all the other rights that actually are in danger of being degraded?  We know they’re being degraded, because the President-elect has promised to degrade them.  We know they’re going to be degraded because the Republican controlled Senate and House of Representatives have promised to degrade them.  We know they’re going to be further degraded because we’ve been promised Supreme Court appointments who will further degrade them.  We know they’re in danger of being degraded because the appointments to high office that the President-elect has already made are of people who have made a life out of degrading the rights of marginalized people (i.e. the new “Chief Strategist” for the White House, Steve Bannon, is a man who might as well be the PR director for the KKK.  This is not a man who can even laughably be thought of as looking after the rights of disenfranchised people). 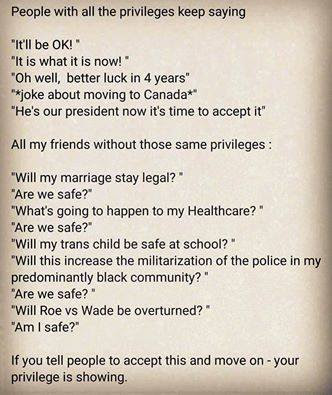 Your fetish for guns is not in danger of being limited.  It never has been.  I wish to Almighty God that we could elect people who would put an end to and walk back the arms race in this country, but it hasn’t happened yet in my lifetime or in the generations before, and I don’t see it happening anytime soon.

So,  my real problem with this fixation so many people have on protecting the Second Amendment is that it seems to be at the expense of all other freedoms - many of which are already threatened or already denied - and it ignores actually implementing the Second Amendment.   PLEASE stop telling me that your irrational fears in 2008 are the same as my fear now.  No one threatened your civil rights.  The people who have been raised to unprecedented power in the past week got there by promising to threaten my civil rights and those of a lot of other people.  I am afraid.  I would be stupid not to be.  I fear that soon, even your guns won’t be enough to protect any of us.  The threats this country faces are only beginning to come into focus.  Silencing us is both dangerous and every bit as un-American as the promises that got us here.