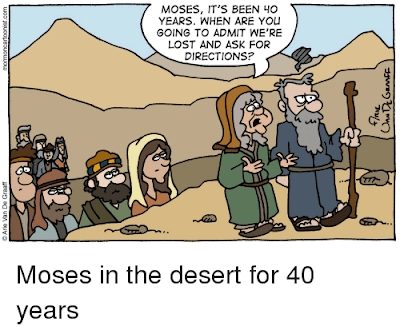 In the name of the God who loves us, and calls us into love.  Amen.

I saw a joke a while back that said that the Israelites could have avoided wandering in the desert for 40 years, if only Moses had stopped to ask for directions.  It reminds of a real-life joke I’ve actually experienced.  When I lived on Long Island, my father came to visit once.  He was hours later than expected, and when he finally arrived, he claimed it was because the map was wrong.  He’d never been to my house before, but he refused to ask for directions from those of us who’d been there.  What’s more, he refused to use a GPS, or anything like that, because “he didn’t want anyone telling him what to do.”

It’s been an ongoing joke in our family, but the fact is, most of us know what it’s like to get into trouble because we jumped into using some new gadget or exploring some new experience or starting some new project without really knowing what we were doing.  And without reading the instructions.

Last week we heard the story of the people of Jerusalem pleading with Jesus just to tell the truth plainly – to quit beating around the bush and help them understand.  I talked about how the realities of God are often too complicated to merely know or understand – the way we might know how to fry an egg.  But that doesn’t mean we can’t get some of it.  It doesn’t mean we should just give up.

In the story we read in the Gospel today, Jesus is telling them plainly more than he ever has anything else.  “Love one another.”  It’s the baseline instruction for what it means to be a Christian.  It’s quite possibly the clearest instruction he ever gave.  It’s at once so perfectly simple, and also so very complex.  So little to know, but so much to understand.  So little to hear (or even say), but so much to do.

If the only thing you ever learned from the church was the commandment to love one another, you’d be well on your way to bringing about the new creation that God has in store for us.  But it’s a lot easier said than done.

In her book, Out of Africa, Isak Dinesen tells the story of a young boy who comes to work for her as domestic help on her coffee plantation in Kenya.  After a few months, she’s surprised when he comes to her asking for a letter of recommendation for him to work at another plantation in a nearby town.  She appreciates his work and doesn’t want him to leave, so she offers additional money to try to coax him into staying.  She learns, however, that the money isn’t the issue.  The man the boy wants to work for practices Islam.  He was interested in converting to one of the religions or the other, but first wanted to live with a Christian, and then with a Muslim, to see first-hand how each lived – to see how they practiced their faith.  She reflects on how much she wishes she’d known she was being seen as an example of the faith.  Perhaps it might have changed how she lived.

The fact is, we are all being seen as examples of our faith.  And not just in the threatening way that religious leaders often talk about God – I’m not talking about “judgement from on high”.  In a very practical, real world way, we’re being observed and judged by the people we meet every day.  In those interactions, how are we proclaiming the Good News of Jesus Christ?  How are we representing our faith?  How are we living the new commandment to love one another?

It’s easy to falter.  It’s easy to get angry when people seem incompetent at things we think should be simple.  It’s easy to fall into the trap of speaking about someone in a negative way, rather than addressing our concerns with the person directly.  It’s easy to neglect the care of those who are suffering, or to get lost in our own desires, and hungers, and selfishness.

And there are countless more.

But we do know that we’ve been called to love one another.