What will we do when he's gone? 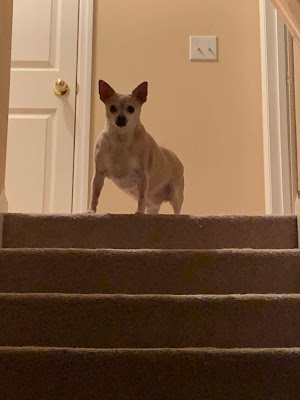 In the name of the One who abides.  Amen.

One of the great joys of being a parent in a family of pets – particularly dogs – is that there are countless opportunities for being reminded that we’re loved.  Earlier this week, I was home alone while Michael was out at a rehearsal.  I saw his car coming through the church parking lot on his way home, and I quietly whispered to our three dogs, “Hey boys…” (That’s our universal sign to them that something wonderful is about to happen) “Hey boys…” I said with a dramatic pause, “daddy’s home.”

With just a split second to process what they’d heard, in an overlapping and simultaneous chorus, the three of them exploded into a fit of joy.  They barked and jumped and ran over to the sliding glass door that leads to our backyard to look for Michael, but they couldn’t see him.  Expectantly, they looked back at me – wondering when their joy would find them.  And in that moment, they heard the garage door opening from the room under us.  They exploded again, barking and running around the room, now certain that I was right – that Daddy was, indeed home – and wondering where he might come from.  They ran to the window behind the couch, they ran back and looked again out into the back yard.  I said to them, “He coming up the stairs, go look there.”  And the three of them ran to the door that leads to the basement, and then back to me, and then back to the door, again and again, until finally, the door opened, and, as promised, Daddy was home!

As is the case whenever we open that door after having been away – for a few minutes or a few hours, either way it’s an eternity – they scramble over one another trying to show their love and joy.

But, of course, the other side of that exuberance is also true.  Whenever we leave, it’s a crisis beyond their imagining.  Perhaps I’ve been with them in the morning, but have to head back to the back of the house, leaving them behind, so I can get ready for work.  As soon as I begin shutting the door behind me, they bark angrily in protest.  But the anger quickly gives way to sadness, and before I can make my way down the hall, I hear them crying and howling.  Clearly they’ve been abandoned!  How could this tragedy ever be rectified??

Or what’s really worse – if Michael and I head down that stairway to the basement together, without them, and then they hear the sound of the garage door opening.  Then we’ve left them for real.  They let out expressions of trauma and grief that will melt your heart.

It’s that leaving process that came to mind this week, when I was reading the Gospel.  We all know what it’s like to be left behind.  When one person in a relationship outgrows the other, and they need to walk apart for a while.  When a close friend becomes parted from you by distance.  When trusted colleagues no longer work in proximity to one another, and each has to find their own way without that support network at the ready.  And, of course, there are those times when our loved ones leave us for the life that awaits beyond breath.  When the thin line between death and life is what separates us.

That’s the separation that Jesus was preparing his followers for.  Theologians call this part of John’s Gospel the “Farewell Discourse”, but in reality, it’s just Jesus trying to prepare them (and us) for his eventual leaving.  Chronologically, he is about to die.  But in our liturgical observance, this is about preparing for the Feast of the Ascension – the commemoration of that moment when the human form of the post-Resurrection Jesus left the disciples, once and for all.  He’d stayed with them as long as he could.  But, at last, it was time to move on.  He’d taught them, and been an example to them, and now, it was up to them to live in his image as best they could.

“Those who love me will keep my word, and my Father will love them, and we will come to them and make our home with them.”

In a pessimistic view, our lives can sometimes seem like little more than an accumulation of loss.  But the wisdom of Jesus tells us that there’s something more.  The sum of our experience is not what we’ve lost, but all that we’ve gained from those we’ve known.  Loss is inevitable.  Life is constantly changing, and change is, invariably, loss in one way or another.  We can never, realistically, hope to avoid change or loss.  But we can hope – even strive – to live through those changes and losses, and to grow from them.  We can choose to be better people as a result of those we’ve known and lost.

That’s what Jesus was calling the disciples to: to living better after having known him.  To keep his word.  Even if they couldn’t keep him, they could keep that part of him, that still living part of him that remained: his word.  His teaching.  His wisdom.  His guidance and direction.

When we leave our dogs, that’s what we’re hoping for them.  They wail and bemoan their loss, but we’re hoping that they’ll keep those lessons that we’ve tried to instill in them.  To get along with each other.  To not chew up the furniture.  To not have accidents in the house.  And sometimes they succeed.  Sometimes we come home to find that they’ve kept up with all that we’ve hoped they would.  And sometimes they haven’t.  Sometimes they fall short.  And when that happens, we’re frustrated and exhausted.  We clean up the mess, even if we don’t feel like it.  But when it’s all said and done, we still love them.

The best we can do is to try to keep Christ’s word.  To care for those among us who are most often forgotten…  To teach the ways of Christ through our own words and our own lives to those who need to hear it…  To pray and to worship…  To love one another, even when it’s hard.

We won’t always get it right.  Sometimes we’ll have accidents.  Sometimes we’ll just not obey, even when we knew better.  But through it all, we will be loved.  So much that we’ll want to do better.  May we keep those words.  May all that we’ve lost invite us into our better lives.  Amen.
St. David's; Kinnelon