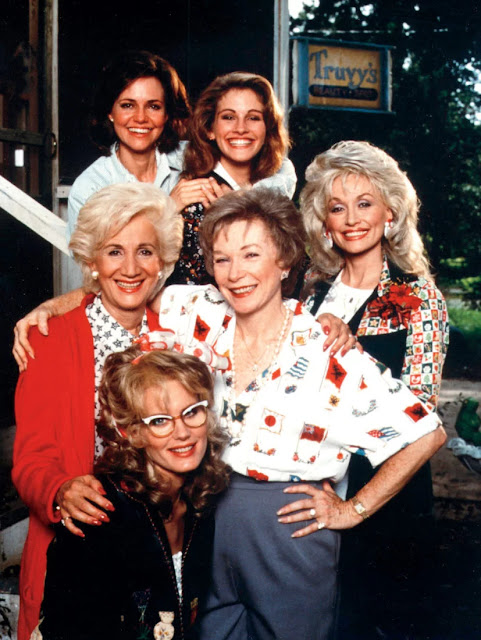 In the name of God who comforts us and challenges us.  Amen.

Probably my favorite movie of all time is Steel Magnolias.  I remember when it was being filmed.  I was a kid – about 10 years old – and we were living in Shreveport, Louisiana at the time.  Though the town where the story was set was fictional, it was based on the real-life home town of the author, and the movie was filmed there – in Natchitoches, Louisiana – just a little over an hour south of Shreveport.  It seemed like everyone at the time had some sort of connection to the movie.  My closest connection was my cousin – she was a featured extra in the final scene, during the Easter egg hunt.

But, even though the personal connections to the place and the production make that movie special, what really makes it a favorite for me, is the story.  It’s a beautiful and heart-wrenching story of a family, and their experiences of deep joy and deep sadness, all centered around the women, and their shared connections that form from years of patronizing the eccentric and often wise beautician in town, played in the film by Dolly Parton.

Part of why this film has come to mean so much to me through the years is that its writing and storytelling is powerful enough, that it continues to have an emotional impact on me, no matter how many times I’ve seen it – and now it’s been too many times to count.  But even so, the comedy still makes me laugh out loud, and the drama still makes me cry like the first time.  Even though I know the end of the story, I still feel the story, and I still respond to it.  Knowing the end, doesn’t mean that it isn’t impactful and meaningful.

I thought of that this week because I came across a post from a friend on Facebook.  It was responding to that beautiful and powerful moment in the story of Jesus when we hear that he wept over the death of his friend Lazarus.  The post said, “He cried.  He knew Lazarus was dead before he got the news.  But still, he cried.  He knew Lazarus would be alive again in moments.  But still, he cried.  He knew this world is not home.  He knew death here is not forever.  He knew eternity better than anyone else could.  And he wept.  Because this world is full of pain and regret and loss and depression and devastation…  He wept because knowing the end of the story doesn’t mean you can’t cry at the sad parts.”

The gospel lesson this week probably makes some of us uncomfortable.  Jesus is talking about fire, and stress, and division.  He’s talking about tearing families apart – “father against son and son against father, mother against daughter and daughter against mother, mother-in-law against daughter-in-law and daughter-in-law against mother-in-law.”  And then he brings it all to a close with an exasperated chastisement against the people.  He says, “You hypocrites!  You know how to interpret the appearance of earth and sky, but why do you not know how to interpret the present time?”

The Gospel of the Lord.  Right?

I don’t know about you, but I don’t walk away from that reading feeling like I’m basking in the glow of gentle Jesus, my friend.  And sometimes that’s just gonna be how it goes.

One of the things that I’ve often found frustrating in my life as a priest these past ten years is how often I’ve heard people say things like, “I come to church to feel good.”  Sometimes they’ll tell me this to explain why they don’t like coming to church during Lent.  Or why they don’t want a funeral for their loved one in the church.  Or, even why they don’t come more often – because they’re already feeling good.  But the truth is, church isn’t just about feeling good.  It’s about feeling God.  And even more so, it’s about knowing God, and having a relationship with God.

Paul talked about that in his letter to the Hebrews.  Recounting some of the stories of the faithful through the ages, he reminds us that “good times” weren’t the promise that brought us closer to God.  What has worked for the people and what still works for us isn’t unencumbered joy, but consistent faith.

“By faith the people passed through the Red Sea as if it were dry land…  By faith the walls of Jericho fell…  By faith Rahab did not perish with those who were disobedient…  Gideon, Barak, Samson, Jephthah… David and Samuel and the prophets – who through faith conquered kingdoms, administered justice, obtained promises, shut the mouths of lions, quenched raging fire, escaped the edge of the sword, won strength out of weakness, became mighty in war, put foreign armies to flight…”  He just keeps going on!

But all those great things didn’t happen in a vacuum.  They didn’t just happen because knowing God means only ever knowing joy.  The point of a relationship with God isn’t just unencumbered joy, but consistent faith.  And sometimes that means crying through the sad parts.  Or struggling through the hard parts.

But I also hope you’re sometimes challenged.  I hope the church and our studies and the relationships you form here also sometimes make you think.  And work.  And reevaluate.

If the church is only about feeling good, it might as well be just some drug – numbing us all from feeling the challenges of the world.  But God is calling us to more than that.  God isn’t calling us to numb ourselves against the challenges of the world, but to experience them more deeply.  To engage with them.  To feel them.  And then, through faith – the kind of faith our ancestors laid out as an example for us – to work to correct them.  To make the world better for someone else.