Rafters & Poults, and Herds, oh my! 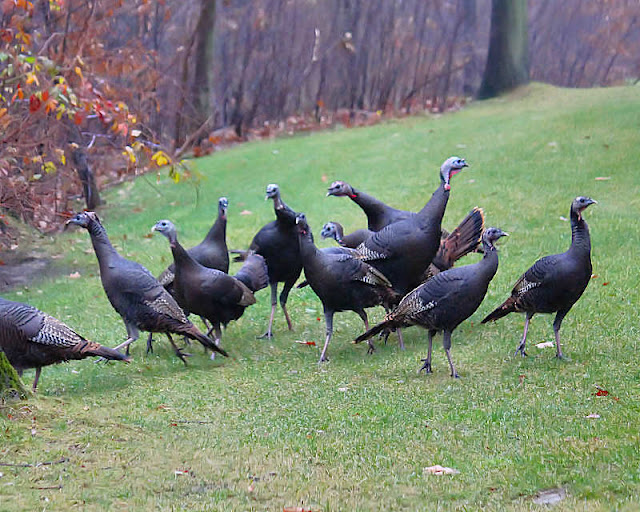 We’ve entered that time of year where the weather seems to be consciously choosing to play tricks on us.  A friend posted on Facebook the other day that it’s that time of year where you leave the house in the morning wearing a sweater and regret it by lunchtime.  And this weekend, the highs are approaching 90, but just a few days ago we had overnight lows in the 40s.

And I’m not the only one feeling it.  This sort of frenetic shifting weather is even sending a lot of our area wildlife into peculiar behaviors.  Walking home from the office the other day, I was met with a huge rafter of turkeys – did you know that’s what a group of turkeys is called: a rafter? – anyway…  We’ve often seen turkeys around the rectory and church grounds, but this rafter had more in one place than I’ve ever seen.  There were at least five fully grown turkeys and 7 or 8 poults (did you know that’s what baby turkeys are called?  Poults – like poultry.  I’m learning so much by living in Kinnelon…)  That same night, Michael came home from rehearsal telling me of seeing a herd of 20-25 deer all crossing Powerville Road at the same time!

As the weather changes, there’s a sort of panic that seems to be descending on our area wildlife.  They behave in different ways this time of year as they prepare for the slowly encroaching winter, and all that lies ahead.

I thought of that this week as I read, once again, this parable of the dishonest manager.  There’s something that can make it hard for this story to connect with us.  At first glance, it seems as if Jesus is advocating for dishonesty.  This shyster – this man who has been put in charge of managing another’s wealth – goes around making friends with the debtors and striking dirty deals with them because he knows he’s about to be fired by the master.

And what does the dishonesty get him?  Commendation from the master.  It seems the master respected his quick thinking more than he desired the protection of his own wealth.

If the biblical account that we read today ended there, we’d be in a bit of a pickle.  This dishonesty seems to go against everything that we expect to hear from Jesus.  We expect the dishonest man to be “cast into the outer darkness” or some such as that – not praised!

But the reading continues, because in this, as in everything we read in the Bible, context is everything.  Jesus goes on to give us the real punch of the teaching, there in that last line.  He says, “No slave can serve two masters; for a slave will either hate the one and love the other, or be devoted to the one and despise the other.  You cannot serve God and wealth.”

That’s what this story is really all about.  While the “dishonest manager” in the parable may not have much to teach us, like a lot of fictional figures, there was a kernel of truth at the center of his story that could apply to all of us – even if we know we shouldn’t mimic every aspect of his behavior.

That kernel of truth is about being willing to turn away from what is immediate to focus instead on the greater reward.  For the manager, the immediate was the accounts he was meant to keep.  But the greater reward was his security and his future going forward.  He knew that he had to prepare for his uncertain future.  And while the way he went about it wasn’t necessarily the most honorable, the wisdom was that he was willing to set aside his current concerns to focus on something bigger.

As people, we often get lost in our current concerns.  The bills that are coming in, the stresses that are eating our time and attention.  But one of the bigger lessons we often hear from Jesus is about turning our focus away from our immediate concerns and focusing instead on the bigger picture.  Turning our focus away from the concerns of the temporal world, and focusing instead on the spiritual life to which we’ve been called.

Of course, our physical lives and the realities of the world aren’t the enemies of Christianity or faith.  Those things are gifts from God.  They are to be celebrated and shared.  But sometimes we get so focused on the here and now, on our own immediate needs, that we forget to think bigger.  We forget to think outside of ourselves.

Granted, the Parable of the Dishonest Manager is not a road map for selfless living, but it is a road map for seeing beyond the ends of our noses.  In the Christian context, it’s not like it is for the wildlife around here panicking to get ready for winter.  It’s not like the Dishonest Manager panicking to get ready for his own financial uncertainty.  But for us, it’s about planning for better serving the ministries to which we’ve been called.  It’s about planning to see more than just our own immediate needs, and recognizing that the Christian mission means seeing a bigger picture beyond ourselves.

The gift of God is knowing that there’s more than just what we can see and taste and touch – more than what we can hold onto and consume.  Those so-called “real” things only point us toward the bigger picture that we can’t quite grasp or imagine just yet.  As the Apostle Paul says, “Now we see in a mirror dimly, but soon we will see face to face.”