We all are called 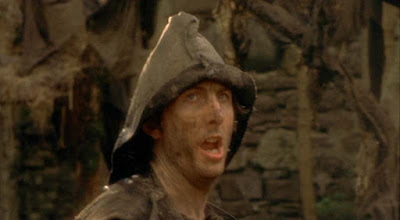 In the name of God who calls us, Christ who shows us how to answer that call, and the Holy Spirit who gives us the tools we need along the way.  Amen.

Maybe I’m just a product of my generation – having grown up when I did – but whenever this particular Gospel lesson comes around, I have a hard time hearing John the Baptist as anything other than a Monty Python character.

Of course, happening once doesn’t actually qualify this as a Monty Python sketch.  What really makes it seem that way is the second time.  The next day, Jesus is again, just walking by, minding his own business, when this disheveled guy, dressed in rough-hewn animal skins who lives in the desert calls out, yet again, “Look!  Here is the Lamb of God!”

It’s like if some crazy person in Manhattan singled you out each day as you left Penn Station on the walk to your office.  Just minding your own business, and there he is, calling out – not even to you, but just about you!

This is John the Baptist.  The wild, maybe even a little crazy, street person who saw something no one else could see.

It’s hard to imagine what it must have been like for Jesus – being born, and growing up as the Son of God.  What must he have known about himself before the real meat of his ministry began?  Did he really know, fully, that he was brought into this world by God to bring Salvation to everyone?  Surely he’d heard some of the remarkable stories that had been told about his birth, but did those stories exist in him with certainty, or with any doubt at all?  Did he need to be called out by John, to really begin to come into the fullness of all that he was born to be?  Did it come as some sort of confirmation for what had almost secretly been brewing inside him for thirty years?

For most of us, at least in my experience on the subject as a priest, that’s very often how “callings” work.  There’s something brewing inside of the one who is called to some particular ministry.  Perhaps we can’t even really put our hands on it, when it’s us.  But then, someone sees something in us.  Maybe we’d considered it ourselves, and maybe we hadn’t.  But there’s something about that spark of hearing from someone else – someone outside our own heads.

For me, it started as a young child – people saw this priesthood in me that I didn’t even understand.  And as I grew it burrowed its way up from deep beneath the surface.  But even as an adult, it took me several years to really embrace it – and then several more to begin to really live into it.

But calling isn’t just for priests.  All Christians are called to Christian ministry in varying ways – according to our abilities, our desires, and the needs of the world.  One of the jobs of the church is to help people see, understand, and respond to their callings.

We actually did that, in a small way, in our Annual Meeting last week.  Throughout the church, utterance of the words “Annual Meeting” can elicit groans and stomach turns.  But at our best, that’s what the Annual Meeting should be – a way for us, as a congregation, to celebrate the ministry of the past, to look forward to the ministry that’s upcoming, and most importantly, to raise up leaders to help us bring that ministry to pass.

Calling people to leadership in the church is just one of the ways that we, as a congregation, call out to people like John the Baptist seeing something important in Jesus.  We are telling the leaders we call that we see something important in you.  Maybe you’ve seen it before – maybe it’s been growing inside of you, quietly, and you haven’t even put words around it – maybe it’s a complete surprise; but there’s something there that the church has seen, and we want to call you into your best potential.

We have countless opportunities to do that for one another – to share dreams for deeper and new service that we see in others.  Perhaps you’ve had a delicious meal at a foyers dinner at someone’s home, and you make the connection that this person has real gifts – maybe they’d want to share that gift with the meal program at St. Paul’s.  Maybe you’ve seen that someone is particularly good with Andrew on Sunday mornings, and you raise the possibility to them that maybe there’s some sort of ministry with children percolating inside them.  It could be almost anything.  And this is the community that’s meant to bring out the best in all of us.

Maybe it feels a little crazy.  Maybe you feel like some caricature in a Monty Python sketch when you consider the idea of taking a roll in helping someone see their calling in ministry.  But this is how it happens – in communities of love and support.  May we all be open to God’s call in our own lives, and in the lives of those we serve with in this community and this world.  Amen.
St. David's; Kinnelon