Making it up as we go 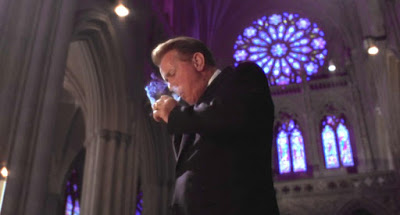 In the name of Christ: our shepherd and our guide.  Amen.

One of my best friends in seminary was a woman named Jennifer.  She had a way of seeing the world that was novel to me, but still somehow spoke to a deep place in my soul.  It felt sort of like fate was bringing us together, because before I was even in school, I’d made a trip to New Jersey to look at housing options – taking pictures of the various options from outside.  Months later, once I was established and in school and making friends, I looked through these pictures again and saw that my friend Jennifer had been sitting on the front steps of one of the places I took a picture of before.

She was my favorite person at school to join me for exciting nights out: a trip to Ikea, wandering the store, and with a dinner of Swedish meatballs in the café.  We would walk through the woods together to get to our classes, and she would share her theories with me about how the deer were really out to kill us all – they were just waiting for the perfect moment to strike.  We would laugh together and revel in each other’s weirdness.

Jennifer was also one of my favorite people to have serious conversations with.  She was actually the first person in the world that I told about this bubbling idea I was having about becoming a priest.  And she forever changed my perspective on scripture when, reflecting on the Apostle Paul, she once said, “He said some nice things, but a lot of it was pretty crazy.”  Seeing my incredulity, she added, “Listen, the church was new and people were looking to him to lead, but he didn’t know anything.  He was just making it up as he went along.  Some of it worked, and some of it didn’t.”

I’ve thought of that conversation a lot over the past few weeks as we’ve been trying to figure out how to do church, and more importantly, how to be the church in this season of physical distancing and isolation.  As much as we all may try to cling to whatever systems and experiences we expect to try to retain any kind of sense of normalcy, the reality is, we’re all just making it up as we go along.  Some of what we’re doing works, and some of it doesn’t.  Some of it doesn’t, but it’s the best we’ve got, so we just try to make it work, even though it really doesn’t.

It would be nice to have a shepherd showing us the way these days.  But, much like Paul was the one those early Christians looked to for all the answers, the shepherds among us are just doing the best they can.  Helping us to find “the way” as they are seeking it themselves.

So today we hear about Jesus as the “good shepherd” in our prayers.  And the gospel lesson takes us through Jesus explaining to his disciples how they should discern who to follow.  The narrator of the story tells us that Jesus was talking about shepherds, and that he “used this figure of speech with them, but they did not understand what he was saying to them.”

The truth is, I don’t really understand it, either.

I mean, I understand that Jesus is telling us that we’ll be tempted by false prophets who will prove to be thieves and bandits.  And I understand that we’re being warned to use the gifts of discernment to make sure we’re not going down the wrong path, following a false leader.  But, as I look at my own life, and the challenges and struggles I face these days, it’s a little hard to come up with what this means for me, today.  And that’s really what we try to be about in the church – finding the ways that scripture and our liturgies inform our lives and better prepare us for the world we’re facing: the ways they make us better Christians today.  Not just in some ideal world, or in a philosophical way.  Because church isn’t just about ideas.  It’s about practice – about being better Christians in our own lives.

So, if I’m sitting here, working at worshiping and learning from Jesus, what good is it to hear about the false prophets?  Haven’t I already gotten on the right side?

I’m reminded of a story from my favorite TV show, The West Wing.  In this particular episode, the President is running for reelection and he is preparing for the debate with his opponent.  His staff is drilling him on “ten word answers”.  The idea is that complicated ideas need to be distilled into simpler sound bites in order for the people to get a handle on it and embrace the candidate.  It’s one of the skills that his opponent has, but not one that President Bartlett was particularly good at.  He was always looking for more words – not fewer.

But the problem with the “ten word answer” is that it isn’t complete.  It may be satisfying, but it isn’t the whole story.  Very often, it isn’t even enough of the story.  It’s just a taste.

Throughout most of the debate, he does a good job with his “ten word answers”.  He gets in all the zings that he needs to feed the cable news clips and get applause, but eventually a topic comes up that’s just too complicated for ten words.  His opponent gets the question first, and he nails it.  There’s basically no substance in his answer, but it checks all the boxes.  It gets the requisite applause.

And in that moment, the President has an epiphany.  In his response to his opponent he says, “That’s it.  That’s the ‘ten word answer’ my staff has been trying to get me to find all week.  You found it.  But here’s my question: what are the next ten words.  And the ten after that.”

While finding the right sound bite may be enough to satisfy the crowds, it’s not enough.  It doesn’t capture the complexity of the issue.  It doesn’t tell the whole story.

And that’s where the gospel lesson is today.  Finding Jesus, and embracing him, and worshiping him is a good start.  It’s a ten-word start.  But what are the next ten words?  And the ten after that?

It’s not just because of a pandemic – Christians throughout history, even all the way back to the Apostle Paul, have been “making it up as we go along”.  We’ve been trying to figure out how to practice these ideals we believe in a world where it’s not the easiest thing to do.  When we’re at our best, the next ten words we come up with are in line with the life and teachings of Jesus.

But a lot of times, we’re not at our best.  A lot of times, we lose the way.  So it’s important to remember the gift of discernment.  It’s important to remember that even though Jesus hasn’t given us all the answers, like a good shepherd, he is showing us the way.  Listen for his voice.  You know it.  There may be others ways that sound similar – maybe even close enough.  But listen closely.  The good shepherd is calling.  Amen.
St. David's; Kinnelon