Remember that Choral Evensong that I was planning to attend at Salisbury Cathedral last night? Well, it was actually a Choral Eucharist -- so even better!

We were celebrating the Feast of the Translation of St. Osmund. Admittedly, this isn't one of the big ones that makes the news in The Episcopal Church, but it 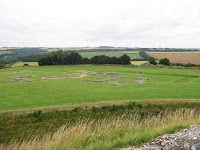 was a fun time in Salisbury at the Cathedral. Osmund was the second Bishop of Sarum and was instrumental in the building of the Cathedral there. I visited the ruins of that original cathedral today. In this photo, you can see the footprint of the cathedral as it is viewed from the ruins of the city and castle.

This was a particular highlight in my holiday time, since I had studied the liturgies of Sarum in an Anglican Liturgical Traditions class in my last year in seminary.

So the Feast of the Translation of St. Osmund commemorates the moving of Osmund's remains from the abandoned cathedral at Sarum to the "new" cathedral (consecrated in 1258) at Salisbury in 1457 - just a few months after he was canonized. 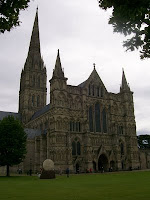 Being a festival of significance for the cathedral itself, they put on quite a show. There was a visiting choir that was spectacular. (Unfortunately I didn't catch where they were from, but they were relatively local) There was lots of incense and a truly splendid sermon by the Very Rev. June Osborne. She artfully weaved together the story of the Translation of Osmund in the context of the prisoner swap between Israel and Hezbollah that had happened earlier in the day and even in the context of our current strife within the Anglican Communion. It was sensitive, but firm. Progressive, but not at all strident. I'm really hoping that the sermon will be posted to the cathedral website so I can read it again, link it, and perhaps post some excerpts!

Then of course the organ concert by Patrick Russill was spectacular. The program included Messiaen, Bach, Franck, Vierne, and Tournemire. I really felt like I got a good taste of that spectacular instrument. I look forward to talking about it with some of my organist friends!

Today was spent reviewing the previous several thousand years of the area's history. As I mentioned, I visited Old Sarum. And again, wow... 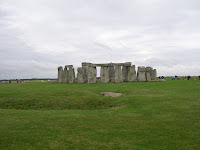 After Old Sarum, I headed up to Stonehenge. I really approached that things I "had" to do since I was so close, as just one of those but was not nearly as excited about it as I was about the church history stuff. What can I say - I'm a church nerd!

But Stonehenge surprised me in how amazing it was. I'm a sucker for "old stuff" and Stonehenge is iconic for that! Add to that the fact that it was likely used for some kind of worship, and I'm sold.

To make matters better and more interesting, I decided to take a taxi on this little journey instead of a bus. The bus would have been much cheaper, but I thought it would be nice to have the one on one time with a local to learn more about things that I might not notice from the bus.

What a good decision!

My driver was a delightful man in his 70s whose accent was very much like that of Jim Trott from the Vicar of Dibley, but thankfully without that stammer! When he learned of my interest in all things church, he decided to take me by way of the back roads so that we could take in a few parish churches. As such, I also got some great views of 12th and 13th century homes with thatch roofs. He even pointed out Sting's house! And it was all accompanied by a wonderful history lesson about everything that we saw. He grew up a short distance from Old Sarum, so my tour of that site was accented with tales about his sister falling off of walls and the like as much as history of the community that was once there. 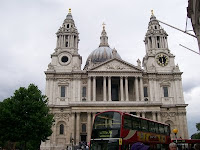 So finally, as much as I hated to leave, my time in Salisbury ended and I headed back to London - just in time for Choral Evensong at St. Paul's Cathedral. Another splendid worship opportunity.

Tomorrow, I'm headed up to Oxford for lunch with a friend that I met in Jerusalem last year. My brother has given me a long list of things to do - hopefully I'll squeeze some of it in!