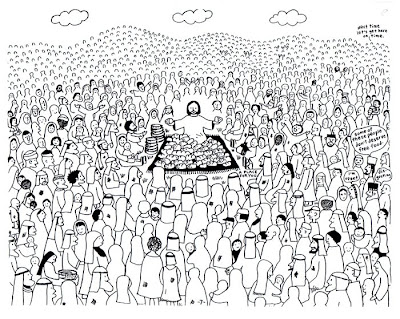 So, I’ve been thinking… This week – for a change – I thought we might talk about bread. ☺

In case you haven’t been following things, for the past five weeks, the Gospel lessons have been all about bread. Well, maybe not all about bread, but there’s been quite a lot of bread talk. It all started with the feeding of the five thousand and moved on from there into four weeks of reflecting and expanding on that experience through the various “I am the bread of life” teachings.

This week, for the first time in more than a month, we have a Gospel lesson that makes no mention whatsoever of bread. But like all great teachings, the lesson remains, even after the words have faded into memory.

Though the Gospel this week is not all about bread, the story continues in the days following the feeding of the five thousand. We return to the story in the Gospel of Mark. Just as the feeding miracle and its accompanying teachings remain fresh in our minds; how much more must they have lingered in the thoughts of the disciples?

At this point in the story, the disciples are gathered around Jesus and they are taking a meal. Jesus had told them that the bread of the earth would fail to sustain them forever – so far, his teaching was holding true.

When the Jewish leaders saw their manner of dining, they were scandalized. So much so, that they confronted Jesus on his failure to adhere to the ancient teachings of the faith once received.

Depending on your level of experience with the so-called orthodox or ‘right-thinking’ proponents of practically any faith tradition, you might be beginning to see a fairly familiar pattern emerging.

One of the lessons that I always try to impart whenever I’m teaching young people is this: whenever you encounter someone who claims to have a handle on the truth, the whole truth, and nothing but the truth – particularly with regard to matters of faith – you can almost guarantee that they’re wrong. Particularly with matters of faith! It is our job, as faithful people, to long and strive for an ever-deeper understanding of the heart of God. But invariably, the moment we think we’ve reached that goal is one of the moments when we are farthest from it.

This is what the Pharisees were guilty of: in their steadfast assurance of their knowledge of the heart of God, they judged Jesus and the disciples for behaving in a way to its contrary.

One of my stumbling blocks in reflecting on this story was my 21st century, germaphobic mindset. Who among us hasn’t instructed a child to wash up before dinner? But that wasn’t the complaint of these 1st century Pharisees. They knew nothing of germs and, as such, were not the least bit concerned about that. Instead, their complaint was that Jesus and the disciples had failed to conduct themselves in compliance with the demands for propriety by the religious authorities. It was not so much that they were dirty, but that they were unclean. They were eating with ‘unsanctified’ hands.

Like I said: know-it-alls almost always don’t. And their complaints tend to follow a specific pattern. Part of that pattern is that their lack of knowledge is eventually revealed.

For the previous five weeks, it hasn’t really been “all about bread”. The real discussion was more about a kind of dualism between the spirit and the flesh – between the stuff of God and the stuff of the world.

Jesus taught about the insufficiency of the material world to meet our spiritual needs. It might have been easy, over these past weeks, to declare that earthly things are inherently evil because they detract from the spirit. But if you listened carefully, you notice that Jesus never said that. Instead, he teaches something more radical altogether. Jesus says that not only is the stuff of the material world not evil, it isn’t even capable of being evil.

The frightening part of this lesson is that, too often, the evil that we face is a product of our own doing or not doing. Even if not as individuals, we as a society can be the cause of great evil. And when evil loses this mysterious quality, there’s no one left to blame it on. We just have to bear the responsibility for the evil we have done or for that, which was done on our behalf. 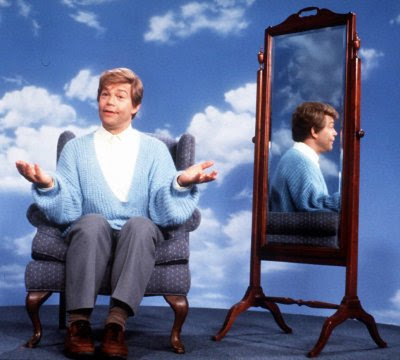 I remember the old Saturday Night Live sketch by Al Franken where the man stares into a mirror and repeats to himself, “I’m good enough, I’m smart enough, and dog gone it, people like me!”

Part of the humor behind that sketch was that the character so clearly didn’t believe it. He sat before his mirror each day trying to will that statement into some truth that he could believe in.

Christ tells us that it is our truth. We are good enough. Not in the sense of some silly mantra to be repeated day after day, but in a deep, ontological sense. In the very depths of our being – somewhere even beneath our bones – we are good enough. No amount of washing can make us any purer in the sight of God. We don’t need the rituals to make us good enough for God. We just are.

It’s not about the bread.

It’s not even about the bread and the wine of the Holy Eucharist.

It’s about the Christ that is present in our communion.

We are good enough because God has declared it so. Amen.
St. Paul's; Chatham

Pamela Reamer Williams said…
Thanks so much for sharing. It's similar to a conversation I had with a little lady slowly dying in the hospital and filled with tremendous fear that God would reject her because she was such a terrible sinner. It's difficult to overcome years of shame-based scripture interpretation with just an hour of talking about unearned grace and unconditional love. I cherish the parable of the workers in the vineyard and assured little Miss Betty that Christ promised us all eternity in our Father's house, no matter how late we accept the invitation.

Thanks for sharing the FACT of God's unwavering love for us flawed mortals.

Jon M. Richardson said…
Thank you for reading and commenting.

Miss Betty was fortunate to have someone like you at her side!