Of "Shark Week" and bread

In the name of God: our Creator, Word, and Wisdom. Amen. 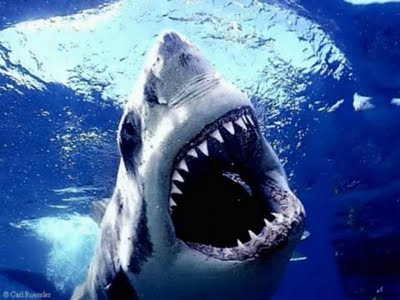 Last week, at Vacation Bible School, whenever the youth who served as counselors had a few minutes without children around, the conversation often turned to “Shark Week”. In case you’re not familiar with “Shark Week”, it’s a periodic series on the Discovery Channel. It started a few years ago when shark attacks were getting so much press and the beach-going public was buying into the media-fueled fear.

During “Shark Week” all of the regularly scheduled programming shifts its focus to something shark-related. And just about everything can be shark-related if you try hard enough! During “Shark Week” you’ll still see “Mythbusters”, but the myths that they test will all be about sharks. You’ll also still see “Dirty Jobs” but the jobs will have to do with all the disgusting and dangerous things people have to do when their job is to work with sharks.

But the Discovery Channel didn’t invent the concept of the series. The church was on to that plan long before anyone had heard of “Shark Week”. You may or may not have noticed, but we’re in the midst of a “Shark Week” of sorts here in the church.

For a few weeks now we’ve been talking about bread. Now I know what you’re thinking. Bread?! No wonder church the church is in decline! The world is talking about sharks, and we’re talking about BREAD!

I know. Bread isn’t exactly exciting. No 1970s horror movie was ever made about bread. No one will ever tell the story of death-defying experiences of bread. Bread is just the simple stuff of human hands. It’s the product of our labor and the source of our sustenance. It’s just wheat and water.

But it can be through this most simple 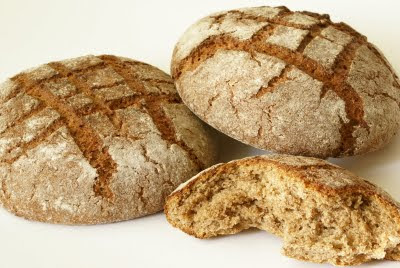 and ancient of concoctions that we learn about Christ.

Two weeks ago we heard the story of the feeding of the five thousand. With only five loaves of bread the multitudes had their fill.

And then last week the miracle became a metaphor: after giving them their daily bread Jesus said, “I am the bread of life. Whoever comes to me will never be hungry…” Starting from the simple stuff of bread, he begins to change how we see the world.

It’s not exciting the way “Shark Week” is exciting, but it is revolutionary. And like all revolution-making, change the way we see the world-talk, his words – both simple and infinitely complex – “I am the bread of life” – were enough to shake the community who heard them.
“Then the Jews began to complain about him because he said, “I am the bread that came down from heaven.” They were saying, “Is not this Jesus, the son of Joseph, whose father and mother we know? How can he now say, ‘I have come down from heaven’?”

It’s a story not entirely unlike our own. Like the crowds who were fed in the field that day followed Christ to see what might happen next, we, too, are drawn to Christ – at least enough to bring us here on Sunday mornings. And like those crowds, basking in the presence is not always enough for us, either. In our lust for certainty, we, too, find ourselves murmuring. Questioning. Drawn, but never quite sure.

This is the point in the sermon at which the leaders of some other churches might tell you to cast aside that doubt and simply trust in the Lord. (As if it were that simple!) One potential action plan in the face of uncertainty is to deny it. To look the other way until all we can see is the certainty. To treat faith as a tool meant to obfuscate the doubt that intrudes our every day. But I would argue that that kind of faith isn’t so much faith as it is filler. The faith to which we are called is something more. Like bread, it is simple and yet infinitely complex.

Last week, Elizabeth told us about some of the breads that we may choose instead of the Bread of Life: the Bread of Anxiety, the Bread of Weariness, the Bread of Control. They’re only fillers. But in facing our own emptinesses we cling to them. We cling to them because they give us a sense of fullness, even if only for a while. But sooner or later their truth is always revealed; and with it our emptiness reemerges, and all the heavier.

Like the Jews in the Gospel lesson today, we, too, are called to engage our doubt. The questions are all around us, and to know Christ – to really, honestly respond to having been drawn to Christ – we must wade through those questions. We must face our emptiness to find the fullness of the love of God.

This is one of the main job descriptions of the life of the Christian: to face the questions, even in the midst of the fear they inevitably inspire. That is the truest faith. Not turning some blind eye to questions, but immersing ourselves into the unknown. This is the work of discernment: to risk entering the unknown in the faith that God will reveal what is needed.

As a community we, in this parish, are in a season of intentional discernment. As Christians we are always called to be discerning the will of God in our lives, but as human beings we sometimes answer that calling more intentionally than at other times. And now is one of those times of intention in the life of the Episcopal Church of St. Paul.

Tim is in China, engaged in a season of discernment of his own. But we remain, doing the work of discerning where God is now calling us as a parish that is deeply committed to ministry with and for the younger members of the Body of Christ, the Bread of Heaven.

And soon Brandon will be leaving to further his education and career through continued study in England. During these past two years he has helped to lead us into a season of stability and strength in the music program. Sometime thereafter a new leader will come among us to aid us in this season of discernment about the ways that we worship and how we can build on the successes of the past two years moving forward.

There are many questions ahead. As I look out across the next year – with almost no sense of who or where we will be at this time next year – I am struck with fear. Though I am afraid, I vow to you that each day I will endeavor to avoid the Bread of Anxiety. I am filled with questions. And though there is so much that I don’t know, I will try not to fill that unknown with the Bread of Control.

We have been promised the Bread of Life. We have a lot of work to do before we can say that we have discerned what that means in our life together. Together we will experience joy beyond our ability to imagine it. We will be sad together. We may grow frustrated with one another. But in moving forward together we will find a deeper understanding of the Bread of Life. It will be embarrassingly simple and infinitely complex. Just like bread. Amen.
St. Paul's; Chatham