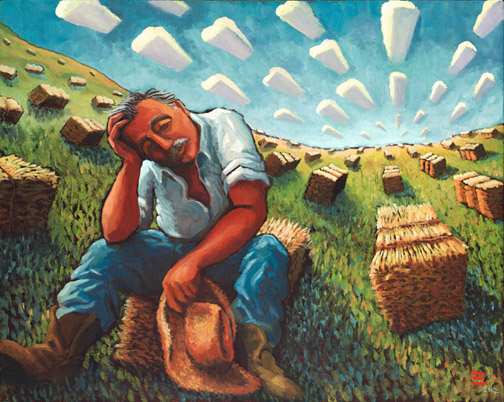 I had an interesting reaction reading through the gospel lesson this week. I caught myself, on the heels of the Feast of the Baptism of Jesus, reading this account from the Gospel According to John and thinking something like: “Enough already! He was baptized last week - we get it!”

The lectionary texts and the liturgical year can sometimes be that way. It can sometimes feel like we get beaten over the head by a particular concept until we just can’t take it anymore. In August of 2009 I was preaching for a bit of an extended stretch while my Rector at the time was on vacation. It was something like five long weeks all about John’s Christology as it was understood through the metaphor of bread. Five weeks of preaching about bread.

By the middle of it, I thought I was going to scream.

But this week my reaction was curious. All last week I was telling people about how much I appreciate the First Sunday after the Epiphany - how it was one of my favorite Sundays of the year, how it gave us a chance to really delve into thoughts of baptism - one of our most important covenants - indeed, the covenant that makes us Christian.

And then, this week, I read the text about John the Baptist proclaiming the Good News of Jesus Christ as it had been revealed to him during Jesus’ baptism, and my first thought was, “Enough already!”

My, how things can change in the course of a week.

Last week was the joy and anticipation of baptism - the exciting beginning of a new ministry; this week, it’s just starting to feel like John the Baptist is harassing Jesus. I found myself identifying with Jesus - or at least how I imagine Jesus must have felt. How he must have felt put upon by John’s constant proclamations. In each of the instances we read today, Jesus was just walking by. Just trying to get from one place to another. But John the Baptist was standing there and proclaiming the Gospel.

It really must have been quite annoying… Give the guy a chance to be the Messiah - stop rushing him!

I imagine this must be how it is for leaders of all stripes: for bishops, for politicians, for leaders around the office - whomever. There must be those times when those at the helm just feel like saying, “Enough already.” There must be times when the burden of responding to God’s call feels a little heavier than we might like - when we might just want to take a back seat.

The gospel never says this is what Jesus was thinking. But it is what I imagine I would have been thinking. It’s what I was thinking just from reading about it.

The church can often feel that way. Sometimes it feels like we’re just beating the same drum over and over again. Stewardship. Love your neighbor. Christmas isn’t just a day, but a season. We say the confession every week. We celebrate the Eucharist every week. Baptism, baptism, baptism.

Do you ever find yourself saying, “Enough, already”?

But the thing is, it really isn’t enough. This week we’ll be celebrating and remembering the Rev. Dr. Martin Luther King, Jr. We’ll remember his tragic and untimely death, certainly, but all the more we’ll try to remember his life and his witness. We’ll try to remember and claim his call to social justice. We’ll remember the hope he inspired. And we’ll use all of that to try to call ourselves to greater accountability. We’ll try to live our lives based around the model that he inspired.

It might be easy to fall into the line of thinking that says, “Enough, already. We’ve had more than forty years to get it and we still haven’t gotten it all the way. Maybe we should just step aside and give it a rest. Maybe find something newer and better.”

But of course we don’t say that. We remember Martin Luther King, Jr. again because the work isn’t done. Progress has been made, but much more is needed.

A few times lately, I’ve told the story of when I was a seminarian: in my first year in field education, I helped to start a group that said Evening Prayer together a few times a week. We were a small group, but we built a tight little community. When we came together, we always remembered the saint that was celebrated on any given feast day, and we took some time to check in with one another. We really got to know one another.

Along the way, it became obvious that one of our regular attendees was having trouble with the pacing that the rest of us were following. While we tried to be slow and deliberate with our words, he hurried through. It wasn’t through any desire to be disruptive, of course, he was just praying in the only way he knew how. We had talked about it as a group and we learned the source of his problem - he had been trained to “get through” the prayers. Meanwhile, we were trying to establish a pattern through which we could make space for the prayers to get through us.

It was a subtle difference, but it radically changed our lives together as prayer partners.

You may have noticed, over the past several weeks, that we’ve shifted from saying the Collect of the Day in unison to saying the Collect for Purity in unison. This is the same thing. By saying these words together as a community each week, it’s my hope and my prayer that the words can become a kind of gift to you - a bit of the church that you’ll carry with you throughout the week as the words of this beautiful old prayer get written in your hearts. And I hope you’ll find that as they work their way into your lives, that you hear them anew from time to time. As the situations of your lives change with each week and each year, you’ll hear these familiar words with new ears.

We’ll probably never know how Jesus felt as he heard John the Baptist proclaiming his good news in each passing each day. But I think I know a little more about why John had to do that proclaiming. The Good News was so good that he needed to say it again. He needed to hear it again and again so he could begin to wrap his mind around it.

Our traditions are the same. We need them. We need them again. We need to let them get through us, so they can be made always new. Amen.
St. Paul's; Jersey City