The living gospel of nonviolence 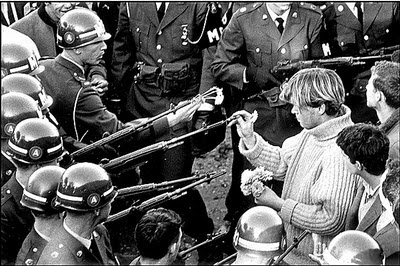 **NOTE -- Another short sermon this week, because it was the day of our Annual Meeting**

The gospel today seems to be coming at a perfect time. All around the world, and even at places close to home, we’re hearing the stories of nonviolent resistance - stories of people standing up for what they believe in and speaking their understandings of truth to the powers that would silence them.

Last week, as I was watching the drama in Egypt unfold, I was filled with a sense of pride and awe for my brothers and sisters half a world away. I would be the first to say that I haven’t followed the story closely enough to really be a fair commentator on the issues in Egypt. I don’t particularly know much about Mubarak and the government he led. I don’t know much about the welfare of the Egyptian people while he was their leader. But what I do know is, too often, when people see a need for change in their leadership, it leads to hardship and strife and violence. It would have been easy for the people of Egypt to turn to those kinds of tactics. But they didn’t. They made the deliberate choice to stand in nonviolence and to speak their truth.

It was an awesome thing to watch.

The same is true in Wisconsin right now. Estimates had the number of demonstrators yesterday estimated at some 70,000. And like their brothers and sisters in Egypt, they never turned violent. Instead, their protests had what many news analysts called a kind of joyful spirit.

It brought them JOY to stand in solidarity against what they viewed as oppressive foes.

In the gospel today, Jesus talks about the need for his followers to refrain from violence. He says, “Do not resist an evildoer. But if anyone strikes you on the right cheek, turn the other also…” and, “Love your enemies and pray for those who persecute you.”

So much of what Jesus tells us can come across as counterintuitive. And at first glance, this might seem like one of those times. Let’s face it: turning the other cheek and praying for our persecutors isn’t usually our first reaction in the face of adversity.

But as has been reinforced for us on the news for the past few weeks, it’s the only response to adversity that ever does work.

Jesus may well be telling us something that’s not our first thought, but it’s not really all that counterintuitive, after all. We know in our guts that violence is wrong. And we know intellectually that it’s rarely effective. But even so, it’s often our first thought. Even so, we need to be reminded to turn the other cheek and to pray for our persecutors.

And the events in the Middle East and the Midwest over the past weeks have been examples of living gospel.

The question is, how will we respond? What will inspire that kind of joy for us? What will we stand for?

Too often, even in the church, we merely stand for our own craftiness or our own variations on worldly wisdom. But as Paul reminds us, “the wisdom of this world is foolishness with God.” What we are told is true, very often isn’t rooted in truth, after all. The fruits of God’s wisdom are built on the foundation of Jesus Christ. Whatever we stand for, it will only stand firmly on that foundation.

So as a church, and as members of that church, we must constantly examine ourselves through the lens of determining our rootedness in Christ. So long as we are rooted in the foundation that is Christ, all that builds on that will be strong. Amen.
St. Paul's; Jersey City