Salt of the earth and light of the world 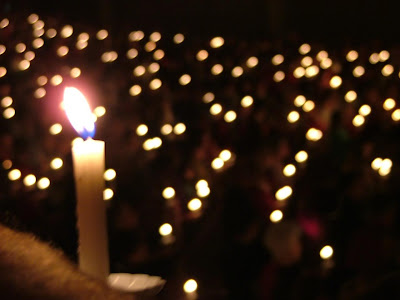 It’s hard for me to imagine a salt that has lost its saltiness. Without its distinct flavor, salt would be just a rock. And not even a particularly admirable rock. Not a rock like Peter - on whom the church is built - but a weak rock. A rock that crumbles and dissolves.

So it is with that light under the bushel basket. It is either wasted or extinguished. A light that is hidden might as well be no light at all.

Salt’s flavor isn’t just for itself. It’s only realized when it’s spread over and dissolved into something else.

And a light doesn’t just illuminate itself. It spreads throughout the room - sharing itself with everything.

This is a part of the nature of our faith.

Last week, part of what we talked about was three things that I’ve noticed to be key elements of every successful church: strong programs in music and liturgy, children and youth, and service to others. All of these elements are about allowing our faith to shine outside of ourselves. They’re about spreading our faith out - allowing it to flavor more aspects of our lives, and reaching out into more aspects of the communities we inhabit. Making something savory and rich that will be warm and desirable, not just for ourselves, but for everyone within our reach.

Too often, it can be tempting, in communities such as this, to keep to ourselves. Perhaps we’re happy with who we are and how we do things. Perhaps we’re just too tired to feel inspired to seek out new people and new patterns and new expressions of community. Perhaps we’ve just done it one way for so long that we can’t imagine anything else.

But when we recognize it, it is important to face it.

In verse 16, in the gospel today, there are four simple words that I hope you’ll carry with you today and in the months and years ahead. Perhaps you should be ready to write this down, because it’s worth remembering.

At the Diocesan Convention last weekend, pretty much everyone I met asked me how things were going here at St. Paul’s. There’s a degree to which those questions among clergy can be kind of superficial. “How are things are your place?” “Oh, they’re fine. How about you?” “Oh, we’re just great, thanks.”

But when folks asked me how things were going here, I found myself busting with pride. Over and over I found myself grinning from ear to ear and saying, “It’s not that we don’t have our challenges - things are rough all over - but the thing that’s so exciting about St. Paul’s is, there’s just SO much potential.”

And it’s true. We as a community, and as a quiet little outpost for the gospel, have SO much potential. We certainly have our challenges. We’ve talked about them a lot, and I’m sure we’ll talk about them more in the weeks ahead. But we also have more potential than I think most of us realize.

This is the main reason that I want this church to grow. We certainly don’t need to grow for ourselves. We could certainly continue surviving as we have been surviving for quite a while. We could just continue going along quietly, doing our own thing. It would probably even be pretty satisfying for many of us.

But there’s a light here that’s worth sharing. There is so much darkness in the world, and we have a chance to shine the light of Christ into it.

The world can be so bland, but we are salty. We have a chance to make people’s lives and experiences so much richer and more interesting.

But only if we spread outside of ourselves.

Like salt and like light, it is our nature to share ourselves. If we don’t, we aren’t being true to our essence - we aren’t fulfilling our potential.

This is an exciting time in the life of this place. And we’re going to need a lot of light. Let your light shine! Amen.

Elizabeth Kaeton said…
Don't you wish you could have played this during your sermon?

I remember seeing this on Broadway, years ago. Julie was about 4 years old. This was the song just before intermission at which, they served wine. (Hand to Jesus).

They served wine and grape juice for the kiddos, but Julie insisted on the wine. The actor, obviously a "churched" person who had served wine to kids at the communion rail looked at her eager eyes, brimming with tears, and said, "Didjya say ya was 45?" and then gave her a sip.

Jon M. Richardson said…
haha... Yeah - Godspell is the soundtrack for year A every time it comes around. You can expect there will be plenty more Godspell clips as the year progresses :)

What a beautiful story about Julie. Perhaps you'll tell that one next time we all get to debating "open communion". I'm still not sure where I fall in that discussion, but this sounds like a sound argument for it.
February 6, 2011 at 8:01:00 PM EST