The Weight of the World 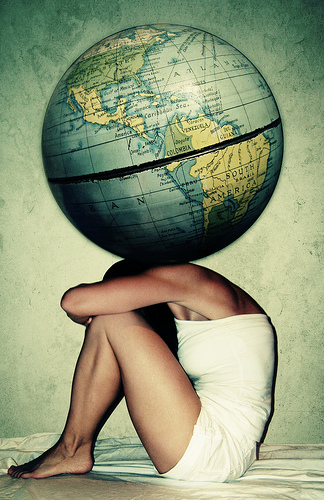 God who made the world; Christ who bore the cross; Spirit who lifts us higher; help us shoulder our burdens.  Amen.

One of the observations I’ve had from time to time about my experience of preaching is, that it is sometimes hard for me to preach to congregations who aren’t conversant in the music of the Indigo Girls.  And though they do have a following, their music doesn’t make them the kind of “household name” that typically works best as sermon illustrations.

So, even if you haven’t heard of the Indigo Girls and you don’t know anything of their music, I hope you’ll indulge me for a moment as I tell you about them.

The group is made up of two singer/songwriters, Amy Ray and Emily Saliers.  One of the reasons that their music has spoken to me for so many years is that it tends to have a very strong social justice edge.  In their songs, they address issues like equal rights and addiction and volunteerism and poverty.  Though they’re not explicitly religious, there are certainly aspects of their songs that speak to my own understanding of religion and spirituality, and what it means to represent Christ to the world.

As I was reading the gospel lesson this week, one song in particular kept rolling through my mind: “the girl with the weight of the world in her hands”.  The song speaks of this unnamed girl – perhaps she was someone real in their lives, or some conflagration of women they’d known – but whoever she was, she had a familiar, unaddressed mournfulness to her. 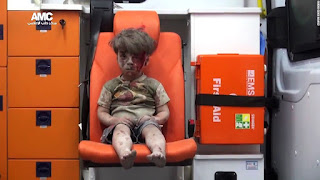 It’s familiar, because we’ve all encountered those characters in our lives.  Just this week, you probably saw the young boy from Allepo, Syria.  He had survived a bombing, and was sitting alone in an ambulance, dirty and bleeding.  His image spoke to so many of us because of its mournfulness.  He wasn’t crying.  He wasn’t unconscious.  He was simply in a state of shock, taking in all that had happened to him.  Being so young – people say that he was probably about 5 – war and crisis were about all that he’d known.  Perhaps he wasn’t crying because he wasn’t surprised.  He was simply taking in the tragedy once again, as if he’d come to expect it.  In his own way, he was that “girl with the weight of the world” in his hands.

I kept hearing this song in my mind this week, thinking of that woman in the story “with a spirit that had crippled her for eighteen years.”  We’re told that she was “bent over” and “quite unable to stand” until she met Jesus, and experienced the saving power of Christ.

The truth is, there are those in our world who more often shoulder the weight of the world than others.  The Syrian boy that we all saw this week is only one example.  But there were other examples, if we were willing to see it.

A lot of us have been watching the Olympics, or at least following some of its stories.  At its best, the occasion of the Olympics is a time for us to join together in celebrating those things that are best about the human experience: teamwork, physical achievement, multiculturalism and pluralism…  And there have been instances of those things during these Olympics, but there have also been some less shining moments.  There have been times when our shortcomings have also been on display.  There have been times when the mournfulness cast upon those “lesser” members of the global community has been highlighted.  Have you heard the stories? 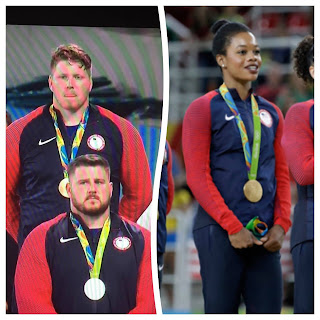 Perhaps you heard about how Gabby Douglas, a gold medal-winning, young, African American   Meanwhile, you very likely haven’t heard of Ryan Crouser and Joe Kovaks: gold and silver medal winners who also didn’t put their hands over their hearts as the national anthem was played.  Crouser and Kovaks are white men, but they faced no public outrage for the same action as Douglas.  The only differences were their race and gender.
woman, was attacked by commentators and pundits for not putting her hand over her heart during our national anthem.

Or, you probably heard about Ryan Lochte and his teammates.  They vandalized a local business in Rio and destroyed its property, but when speaking to the press, they made up a story about how they had been robbed at gunpoint.  There has been embarrassment and outrage about their actions in the public, but the International Olympic Committee tried to make excuses for them.  Their spokesman said, “We have to understand that these kids came here to have fun. Let's give these kids a break...” 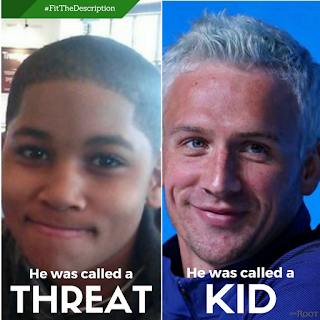 Whatever you think about the particulars of any of these stories, it seems pretty obvious that there are certain members of our society on whom the “weight of the world” is more easily thrust.  There are certain people among us who are much more likely to be left with crippling spirits.  If you’re a woman, or if your skin is dark, or if you’re a child in a war-ravaged country, or if you are attracted to people of the same gender as yourself, or if you gender expression doesn’t conform to social expectations, or if you’re poor…  You’re more likely to feel the weight of the world bearing down on you.

Jesus saved that woman.  Christ freed her from the crippling spirit.  And we are meant to be the hands and feet of Christ living in the world today.  It’s easy to see the crippling spirits all around us.  If we look, it gets very easy to see them.  But how will we free those people we find trapped under them?  How will be Christ to the ones who are suffering?  How will we alleviate the suffering we unthinkingly perpetuate?

A lot of people will tell you that this story we read today is about Jesus healing on the Sabbath, but in doing so, they’ll skip right over the woman who was healed.  Don’t forget about the woman with the weight of the world in her hands.  That’s where the story begins.  Not with the men arguing over it, but with the woman.  That’s where Jesus first shows up.

That’s also where we’re called to be – right in the thick of it, easing burdens.  That’s where Christ lives, and that’s where we should live, too.  Amen.