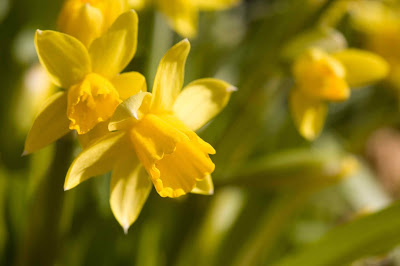 In the name of God…

This year, as Spring is beginning to reveal itself, and we see the bulbs beginning to pop up all over, I’ve been reminded of a story from my childhood.  I was in the first grade.  It was my family’s first Spring in the parish where my father was the pastor.  It was a small town, and when the weather was nice, I would usually spend afternoons out and about in the neighborhood.

Even the church grounds were rich with potential for a young boy’s exploration.  The church had just finished building a new gymnasium a couple of months after we’d arrived, and some of the ladies of the parish had painstakingly planted bulbs down the long edge of the building.  On this particular afternoon, I came along there and saw a row of dozens upon dozens of beautiful, newly opened daffodils.  Being the thoughtful child that I was, it occurred to me that my mother might appreciate these beautiful flowers.  So I walked along the edge of the building and picked every one - to take home to mom.

Of course, in the end, no one could seriously begrudge a 7 or 8 year old boy who just wanted to give his mother some flowers, but I did quickly learn that I wasn’t to do that again - that they weren’t mine to pick.

I thought of that story again this week as we heard this parable from Jesus once again about pruning.  This is one of those stories that can, at first glance, be a little tough to swallow.  My experience of God and the Christian message is more about building people up - not pruning them back.  And this is one of those stories that’s often been used to justify our “pruning”.

“He removes every branch in me that bears no fruit… such branches are gathered, thrown into the fire, and burned.”

The problem with that, however, is that we use this text to justify our pruning of others, when in reality, it’s meant to justify God’s pruning.  The fact is, we’re not very good at “pruning” back God’s people.  When we entrust ourselves with that task, we invariably make mistakes.  Like that 7 or 8 year old boy who over-picked the daffodils that weren’t his to take - no matter how good our intentions are, when we do the pruning ourselves, we invariably encroach upon the prerogative of God, taking liberties that aren’t ours to take.

Take, for instance, the story of the Ethiopian eunuch.  Here was a man, who, at an early age had been castrated so that he could be set aside for future service to the queen.  In the patriarchy of his time and place, men weren’t meant for service - especially to women.  So, for a man to be in his position, they believed that he must be emasculated; for the protection of the queen, but also for the broader protection of masculinity itself.

From what we hear of the Acts of the Apostles, he was a particularly powerful man - entrusted with the queen’s treasury.  He was a learned man - reading the Holy Scriptures as he traveled.  He was a wealthy man - seated in a chariot, being driven by another; while less affluent and less influential people would have been left walking.

But even despite his power, and learning, and wealth, he was denied entry into the temple.  He was denied the opportunity to worship God.  Think about how long it must have taken him to journey to the Temple in Jerusalem from Ethiopia.  Even with the benefit of a chariot, it must have been a long and grueling ride.  There must have been times when he risked his personal safety and even his life to have made this journey.  Only to have been denied the opportunity to worship, simply because of who he was.  Because of circumstances of his life that were thrust upon him, probably even before he had agency to decide such things for himself.

He had been pruned away from the body of the faithful, because of circumstances beyond his control.  His life bore much fruit - as a leader and a scholar, as one who influenced the highest levels of power and authority in the world.  But even so, he was pruned out by people who decided he wasn’t pure enough or righteous enough to worship.

The thing is, it wasn’t their call to make.

When Philip shared with him the message of Christ, this unnamed Ethiopian saw a place for himself in the story.  He heard the scriptures with new revelation: they said, “in his humiliation, justice was denied him…”  Having just been denied the justice of worshipping God, the eunuch saw in the humiliations of Christ a measure of his own.  Seeing the resurrection of Christ, he could imagine a new life for himself, upheld by Christ.

Rather than seeing this talk of pruning as a way of denying justice to those people we encounter who don’t fit into the mold of the ideals we’ve constructed, perhaps we should hear, more clearly, the words of Christ: “[God] removes every branch in me that bears no fruit”.  Rather than looking for those branches that we imagine to be unable to bear fruit in others, perhaps we should look more closely within ourselves.  What are those aspects of ourselves that don’t bear fruit?  What are those aspects of ourselves that impede the mission of God in the world?

The first Epistle of John says, “Beloved, let us love one another, because love is from God…”

Cutting out our neighbors isn’t ours to do.  Our only job ever is to uphold love.  That’s the only way to uphold God in the world - to uphold love.  Cast aside all that isn’t to do with love, and leave the rest of the pruning to God.  Amen.