The way out of the hole 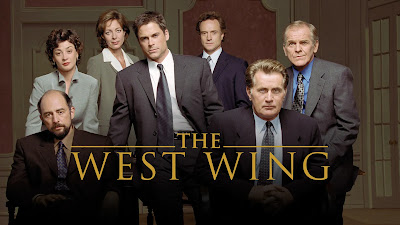 In the name of Christ, the Savior who leads us.  Alleluia, and amen!

I’ve often said that for every situation in life, for every sermon to be delivered, for every issue to be discerned - there’s either a lyric from an Indigo Girls song or a scene from my favorite television show that can shed some light on the situation and offer a bit of clarity.  Today, I turn once again, to that favorite television show of all time (and no, Michael, it’s not RuPaul’s Drag Race), it’s The West Wing.

The West Wing takes place in a fictional White House.  The story takes us through the life and the decisions of the President, of course, but most of the story revolves around the work and personal lives of the members of the senior staff.

Early in the series, Josh Lyman, the Deputy Chief of Staff, is shot during an assassination attempt on the President.  Though he recovers from the physical wounds, the emotional scaring that accompanied being a victim of gun violence took longer to heal.  His Post-Traumatic Stress Disorder goes unchecked for several months, boiling just beneath the surface, before it finally erupts with him lashing out at everyone around him, including the President.

He knows he’s stepped over the line.  But in an act of understanding and generosity, rather than facing discipline, his superiors make arrangements for him to get the emotional support he needs to begin real healing.

Following a long, and intensive first counseling session, Josh sees Leo, his boss, and he asks him why he had been given this second chance.  Leo answers, by telling him a story.

“You see, there’s this guy walking down the road, when he falls into a hole.  He tries to get out, but it’s impossible to do alone, so he calls for help from whomever is around.  A doctor walks by and hears him, and writes out a prescription and throws it down in the hole and moves on.  A priest walks by, and hearing his cries, writes out a prayer, and throws it down into the hole.  But then a friend walks by.  He realizes what’s going on, and immediately, he jumps down into the hole.  The first guy cries out, ‘What are you doing?!  Now we’re both stuck down here!’  His friend says, ‘Yeah, but I’ve been down here before and I know the way out.’”

One of the scariest things we face in our lives is navigating new situations.  Michael and I have been doing that in a literal way these past couple of months as we’ve moved here to Kinnelon, and begun our married life together, and begun forging these new relationships with all of you.  But we all face the challenges and fears that come from walking down roads we’ve never walked, from time to time.  Whether it be starting a new job, or losing a job, or taking the risk of moving into retirement, or into a new home, or learning to live through changes in our relationships, or mourning the loss of a dear loved one.  It’s often said that the only constant in life is change, and with change comes exposure to new experiences.  They can be exhilarating, sometimes, but they can also be scary.

On that first Easter morning, before anyone knew yet that it was Easter, the terror of this new, post-Crucifixion world held Jesus’ followers in its grip.  Their leader had been killed for challenging the ruling powers of the day - they had to wonder: might they be next?

When they got to the tomb, however, they saw that the stone had already been rolled out of the way.  It was already open, and when they went inside, they found a young man sitting there with a message they never could have imagined.

Jesus, the Christ, who had led them through so much, was leading them still.  “He is going ahead of you to Galilee,” the young man said, “there you will see him.”
For me, this is the heart of the Christian message: through the person of Jesus, God has joined with us in human experience.  God has already fallen down into the hole, and knows how to lead us out.

The man, whom tradition has called an angel, told the women, “He is going ahead of you…”

You are not alone.  Full stop.

There’s someone who’s already been down that hole, and can show us the way out.  That’s what we’re about, here in the church, every Sunday: following Christ, and learning with one another, the ways out of the holes we fall into throughout our lives.

Christ has already gone ahead of us.  When we follow, there we will see him.  Alleluia, and amen!