Tap dancing with the Holy Spirit 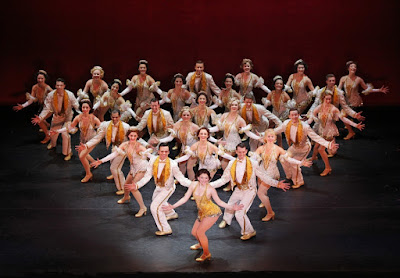 In the name of God, the author; Christ, the word; and the Holy Spirit of Understanding.  Amen.

It’s been fascinating to see how each of the theatre arts has its own kind of language.  Not too long ago I learned that lighting designers refer to their lights as instruments, and each of the instruments has its own name.  I giggled when I first heard a lighting designer talk about inkies and birdies.  I was stumped - and had to look it up - when I heard talk of fresnels.  And the same is true of the other theatre arts - blocking has its own set of terms (and of course, blocking, itself, is a thatre term).  Sound designers and musicians have their own distinct languages.  The list goes on and on…

But no distinct language that I’ve encountered in the theatre is more distinct than the language of tap dancers.  If you’re not a tap dancer, you should find an occasion for seeing tap choreography come together sometime.  It’s a mystical experience.  And people who are trained in tap dancing, talk to one another in this bizarre collection of words - many of which aren’t just repurposed for tap, but are words that exist literally nowhere outside of tap.  So watching an experienced choreographer interact with experienced dancers is a marvel.

The choreographer will express a vision, and often give an example of the goal, but what follows is an analysis of its elements, each broken down into pre-determined points of execution.  As I understand it (and Michael has assured me that I don’t understand it at all), but as I understand it, tap dance only has a limited number of steps.  Each with a name.  But where the real artistry comes in, is in tweaking each of those steps into some new approach, or joining steps together in new ways, and with new music and new rhythms.

Usually when I’ve seen this coming together, I’ve been entirely lost.  I didn’t know what they were talking about, or how they were deploying the different clicks and clacks, but somewhere along the way - through a power that feels almost magical - the dance comes together, and it helps us, in the audience, to experience the story and the song in a new way.

But it all started with this distinct language.  It was borne out of a common understanding and perspective, but through a willingness to push the boundaries of that commonality.

We, in the church, can do the same thing.  We talk in our own languages.  Out in the world - the world outside these walls - you’re unlikely to hear a lot of our words.  Narthex.  Nave.  Undercroft.  Sexton.  Sanctuary.  Discernment.  Vestry.  And when we’re not careful, that different language can separate us from the people we’ve been called to serve.  It can come off as exclusionary, and contrary to our witness of the love of Christ that is available to everyone.

It is, of course, the language of the Holy Spirit.  That still, small voice.  That spark of understanding.  That gift from Christ to the church.  That’s the real language that unites us.  Last week, we heard the prayer of Jesus that we all may be “one” - it’s the Holy Spirit that gives us any hope of making that true.

Reading the story from the Acts of the Apostles about Pentecost - the story of the tongues of fire resting on each of them, and leading each of them to speak in the languages of the people - it’s worth noting that the “speaking in tongues” bit wasn’t just gibberish.  They were not just so full of excitement about God that they couldn’t find words and blathered on in delirium.  No, they were speaking to the people.  The Spirit, on behalf of God and following the pattern set by Christ, was filling the people with the words that they needed to speak to the people around them.  The story tells us that there were people from all over gathered in Jerusalem, and the disciples spoke to them in such a way as to be understood.

Notice that the story doesn’t tell us what was said.  There wasn’t some magical incantation that led people to enlightenment.  Peter, we’re told, went on to preach to the crowd, but the writer didn’t think it was necessary to explain what had been said in tongues, only that it had been said.

I can’t tell you what the words are.  Most of the time I don’t know them, myself.  But I do know that it’s a gift of God from Christ.  I do know that it can bridge gaps that we might have thought were too wide to cross.

Tap dancers take their language and stretch it, and pull it, and nurture it into a new way of communicating the story they’re trying to tell.  The Holy Spirit does that with us, too.  It takes what we know, and stretches us, and pulls us, and nurtures us into new ways of speaking the peace of Christ to people and in places that once seemed out of reach.

That’s the gift of the Holy Spirit.  The gift to make us into God’s agents in the world for each other, and for those others we may never have imagined.