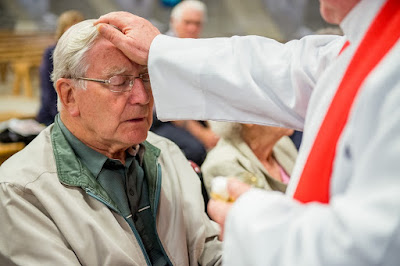 In the name of God who gives us life, Christ who heals us, and the Holy Spirit who makes us free.  Amen.

One of the things that most impressed me when I first arrived here - and that was also impressive to our Bishop when he was here a few weeks ago - was the deep spiritual commitment that can be seen throughout this parish.  This isn’t a parish that just leaves the praying to the priest.  There are people exercising their own spiritual talents and abilities all over this church.

You can see this in many of the meetings that happen around here.  It’s not uncommon for meetings in churches to begin with prayers, but the thing that makes St. David’s special, is that the responsibility for leading those prayers is shared around the tables.  At our Vestry meetings each month, one among us will lead prayer on a rotation.  She or he can choose to use a suggested prayer from a list that was previously compiled, but as often as not, the person leading will have another prayer in mind that they think works better.  Then, after that, another member will share a spiritual or inspirational moment with the rest of the group.

For a priest, it’s really exciting and fun to be a part of a congregation that takes this commitment to prayer and spirituality so seriously.

But nowhere is our commitment to praying with and for one another more moving, than it is in our commitment to healing ministries.  One Sunday each month - and today is that Sunday this month, actually - a team of people stand on the sides of the altar to offer healing prayers for anyone who feels the need for it.  You only have to avail yourself of the ministry, and it is provided - no questions asked, no judgement, no problem.  Then, every Thursday, a small group of us gather in the chapel to celebrate the Eucharist together, and to pray for healing and wholeness - not just for each other, but for this entire community - even the parts of it that are out of reach and out of sight.  Again, anyone can be a part of that.  And, in fact, you are a part of it - whether or not you’re present, because we’re praying for you.

Today, we hear two stories of Jesus’ healing.  One is the daughter of a leader of the synagogue - a pillar of the community - turning desperately to the saving help of a renegade, travelling preacher.  The other is an outcast - an unclean woman: two strikes against her - who had been ailing for years, with no relief.  She interrupted this famous traveler on his way to help the more powerful man when no one else could (or would) help her.

It’s almost hard to tell which of these people was more brave: the man who had the wind at his back, but risked it all to save his daughter - even if it was with the help of someone he should have reviled; or the woman who had all the odds stacked against her, but who risked even the little standing she did have, because her faith told her that relief was within her grasp.

Healing - as a ministry - is a curious thing.  When I was first studying to be a priest, and even when I was first ordained, my parish, at the time, had a little healing service at 7:00 on Wednesday mornings.  While I’m not one of those people who can’t function first thing in the mornings, I’m not completely a “morning person”, either.  Getting up for a service at 7:00 was challenging.

But, as I went through the routine over the course of the years I was there, a deeper challenge began to emerge: something about those healing prayers felt inauthentic to me.  It wasn’t as simple as if I didn’t believe, I just didn’t really understand it.  We prayed for one dear man each week, for healing as he faced terminal cancer, but we all knew it was a matter of time.  Sooner or later, his battle would end - and not because our prayers were as strong as Christ’s.  We prayed for others who weren’t even there: a woman who was less than even a shell of her former self as she succumbed to dementia, a child who was trying to find his way in the world, despite irreversible birth defects, and many others.  What could our simple prayers for healing do for all of them?

I talked about this with my mentor, and tried to find some spiritual peace with it.  But it wasn’t until later that it all began to make sense.  One day, while working in another parish, we received word that one of the leaders in our community - a young man with early teen-aged daughters - had had a massive heart attack while attending a meeting in Manhattan.  He had survived long enough to make it to the hospital, but it didn’t look good.

I was about to go in to the city to visit with his daughters, who were a part of my youth group, but in terror I went into the rector’s office and asked what I should do.  She told me that it may well be that the best thing I could do would be to sit with the daughters and distract them - even if only briefly - from the horrors they were experiencing.  And, if nothing else, I should offer to pray with them.  This prospect terrified me.  How could I pray when there was nothing that anyone could do?  What should I pray for?

My Rector, at the time, gave me some of the best advice about prayer I’ve ever heard, and I still think of it to this day.  She said, “Ask them what they want you to pray for, then pray for that.”  I said, “But what if it’s unrealistic?  What if it can’t happen?”  She said, “That’s not for you to decide.  Just pray.”

Well, I did pray for him.  I prayed for everything that his daughters asked: that he would wake up, and laugh again, and that everything would be fine.  And a few days later, he died.

But even so, healing happened.  His daughters, and his wife were reminded that God hadn’t forgotten them - a lesson that would uphold them in the days that followed, and even more as they worked their ways through their grief and growth into their new reality.  I was healed of the fear that my prayers might not be strong enough - not because I was proven strong, but because I came to see that it wasn’t about me, or about the strength of my prayers, but instead, it was, and is, and always will be about God, and the created order that God has promised to love and care for.

The message of this story that we read today isn’t that if we pray for the impossible, God’s blessings will drop out of the sky according to our demands, like from a genie in a lamp.  No, the message is that God’s blessings are open to all who will believe - whether strong or weak, male or female, leader or servant, north or south, red or blue, whatever and whomever we can imagine.  And also that faith IS healing.  In the midst of all that there is to fear in the world, the message is clear: “Do not fear.  Only believe.”  Life is life, and sometimes it hurts, and sometimes we don’t understand, and all too often our faith falls short.  But even despite all of that, God loves us and heals us.  Even if we can’t quite grasp that healing at the time.

So keep praying.  In meetings, and at bedsides, and when you know you need healing, and even when you don’t know that you need it.  Prayer is less about what you say, and more about making space for God in your life.  Even if your wishes don’t come true.  Even if you mess up the words.  God keeps loving us, even when we forget.  Amen.