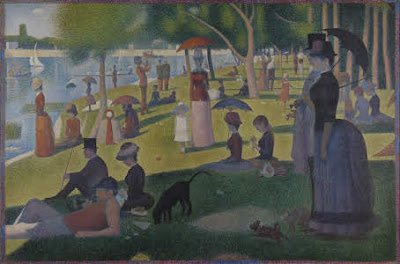 
There isn’t much that I know less about than the visual arts.  And, I will freely admit, that the vast majority of what I do know about visual arts, I learned from performing arts – specifically musical theatre.  Even more specifically, the Sondheim musical Sunday in the Park with George.  It’s the fictionalized story of Georges Seurat – and later, of the generations that would follow him.  Seurat was the French painter who created that most iconic example of pointillism, “A Sunday Afternoon on the Island of La Grande Jatte”.

In fact, the musical Sunday in the Park… is where I learned that there even was such a thing as “pointillism”.  I’d seen images of the painting before, but only on screens.  I’d never seen the thing, itself, in person.  So, it wasn’t until learning that show that I first learned that, point a, the painting itself is huge – more than 10 feet wide and nearly 7 feet tall.  And point b, it’s composed of millions of tiny dots – points of color.  Each, on their own, seem insignificant.  But seen from afar, and together, they paint a complex scene that’s been studied and imitated and picked apart for more than a century.  Together, they create something memorable.  Magnificent.  Magical.

A few weeks ago, I shared a post on our parish Facebook page – it said, simply, “How cool is it that the same God who created mountains and oceans and galaxies looked at you and thought… the world needs one of you, too.”

The Collect for today says, “Almighty God, you have knit together your elect in one communion and fellowship in the mystical body of your Son Christ our Lord…”  Part of a single, constant thread, that through time, has been pulled and knotted and woven into one fabric of cohesive history.  God knits us together.  Each of our points.  And the untold points that led through the history of the world to make us, for this day and time and place in history.

Every society and every religious expression calls to mind the thread of history that precedes it.  For us to celebrate the Feast of All Saints and the commemoration of all souls simply cements our place among the ancestors.  We, like them, call to mind the ones who’ve gone before.  The ones the Prayer Book describes as those whom we “love but see no longer.”  The ones we remember, but also all the ones they remember, but whom we’ve forgotten.  Our shared memories tie us together – from before we can remember to long after we’re forgotten.  All part of a single thread of countless points.

“Their departure was thought to be a disaster,” says Solomon, “and their going from us to be their destruction; but they are at peace.”  “The souls of the righteous are in the hand of God…”  That’s the wisdom we hear from Solomon.

But even so, it hurts when they go.

Jesus felt that same hurt.  Jesus, who lived not only by faith, like we have to live, but with the sheer, unobstructed knowledge of the goodness of God and the life, everlasting that was to come – even he felt the hurt when he lost his friend, Lazarus.  He wept at his loss.  He knew Lazarus to be one of the points of his story, a knot in the thread that helped to make up the fabric of his life.  So he wept.  And he mourned.

But his own loss wasn’t the point.  The point was the illustration.  This was a moment when he could show the collected points of his community the big picture: the God that Christ is calling the people to follow and to know more fully isn’t a god of endings, but of beginnings.  God isn’t a god of death, but of life.  He came that we might have life, and that we might have it abundantly!

That’s the story of Jesus.  He healed even those who couldn’t be healed, because it pointed to the bigger picture – the teachings of God’s love for us, and of God’s nearness to us, and of God’s relationship with us.  To hear those teachings, and to take them into our lives makes us more than just little dots in the universe, but a part of that bigger picture – it makes that unimaginable “more life” – that elusive concept that we can’t really define, but are called to believe – the teachings make even that possible.  The teachings show that our lives are painted in as tiny dots in that bigger picture.

We celebrate that today: that we are among those points, and that we’ve been brought here by countless others.  We lift some of them up as examples of the wider truth that we can’t fathom.  We remember them.  We mourn them.  But also, we celebrate them and give thanks for them.  Until someday, when we will join them.  Amen.
St. David's; Kinnelon