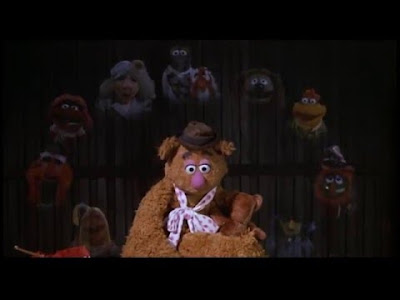 In the name of the God who founds us, who finds us, and who frees us.  Amen.

There are a number of things that might lead someone to accuse me of being a weird preacher.  My reliance on Broadway musicals and the pop/folk music of the Indigo Girls, and old-timey Southern Gospel…  But this morning, I wanted to talk about one of the earliest aspects of my moral formation.  A tool that impacted me as a child, and continues, even to this day, to influence how I see the world: the movie, The Muppets Take Manhattan.

In this movie, the Muppets have just graduated from college, and set out on a whim to try to make it in New York City.  They’ve written a musical and hope to get it produced on Broadway.  Soon, however, they recognize that that’s easier said than done.  They encounter roadblocks and stumbling blocks and setbacks at every turn.  It turns out that Broadway producers rarely take a show seriously when it’s been written, directed, and stars, as one producer puts it, “frogs, and dogs, and chickens, and things…”

Eventually, however, what finally seals their failure, is a lack of money.  Though they’ve done their best to live simply – for sleeping arrangements they rent lockers in a bus station, they eat at a cheap Greek diner where rats do the cooking – even so, the money runs out.  The future of the show seems bleak, so they decide to part ways.  They gave it a go, but it’s time to move on.

There’s a song they sing as they go their separate ways.  It’s one of those songs that even people with the hardest hearts, made of the most rigid stone, wouldn’t be able to hear in the context of the film and not get at least a little misty-eyed.

It says, in part:

“Saying goodbye, why is it sad?
Makes us remember the good times we had…
Somehow I know we’ll meet again.
Not sure quite where and I don’t know just when.
You’re in my heart, so until then, it’s time for saying goodbye.”

Unity, these days, even as an aspiration, seems almost laughable.  Our political culture has moved into such disunity that we can’t even agree on facts.  Even numbers aren’t trusted by everyone.  And it’s not just here in the US, but a sweeping reality in almost every part of the Western world.  And even the church: always called to unity, but rarely achieving it – even we seem to be finding ever-new ways of ignoring this calling.  We constantly blame each other for our shared struggles.  We each assert our “rightness” and demand that everyone else must be wrong.

There’s always been disunity.  Just look at the Gospels – we have four accounts, because there were so many different ways of recounting the stories of Jesus, and we just couldn’t agree.  And more than four, there were many, many others that didn’t even make it into the final cut.

It seems sort of strange that in this final plea, Jesus is calling for unity – a goal that fell apart almost as soon as it was first uttered.

There’s a famous saying, though the source is unknown, which says: “In essentials, unity; in nonessentials, liberty; in all things, charity.”  It’s been cited by Popes and leaders of the German Reformation.  It’s been idealized by Anglicans, and by the Methodist dissenters who first broke from Anglicanism.  So maybe “unity” isn’t as far off as we’d imagined.

While we may not often agree on exactly what’s essential and what’s not, there are certainly things that unify us.  It’s part of why we say the creed each week.  Maybe some of us struggle with certain words or concepts here and there.  Maybe the whole thing seems frivolous to you.  But we keep saying these words week after week, because they unite us to the church that’s come before – the church that discerned that belief, and the church in the centuries since then that has continued to struggle with it.  And it’s part of why we worship the way we worship – because it ties us in worship with untold others around the world every moment of every day; it builds the Body of Christ into a body of prayer.  We may not all be entirely uniform, but we are in unity.

And that very prayer unites us to Christ – not just in our words or invocations or petitions and interventions – but in the act of prayer itself.  We pray, because the one we worship also prayed – and not just for himself, but for us.

And though Christ left to sit at the right hand of the Creator, even then we weren’t left alone.  We were left with the Spirit of God and Christ to continue to guide and uphold us.  To inspire us and to strengthen us.  And not just any one of us, but us.  Together.  United.

In the end, the Muppets weren’t separated forever.  Their love brought them back together.  The very song that was so moving as they went their own ways only served to prove that their ways ran together.

“Somehow I know we’ll meet again.  Not sure quite where and I don’t know just when…”

Love is the ultimate unity.  Even when we can’t agree – even when we can’t get together on the details, love and prayer are unifying.  We can mess up a lot, but that holds fast.  For ever and ever.  Amen.
St. David's; Kinnelon