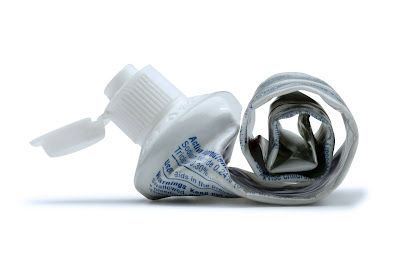 In the name of the God of all truth.  Amen.

Earlier this week I was thinking of this random recollection from my childhood.  In the summer months, I would typically go spend some time with my grandparents on both sides.  I would usually go apart from my brother – it was just my time with them.  Consequently, it gave my parents time with each other.  But from my perspective, it was all about me.  I had this special time that no one else had.

I remember one morning when I was brushing my teeth, I determined that the toothpaste tube was empty.  I was probably about 7 years old, or so.  I went to tell my grandmother that I needed more toothpaste, but she assured me that the tube wasn’t empty.  She came into the bathroom, and sure enough, she squeezed out a bit more toothpaste.

I vividly remember being in awe in that moment.  The tube had been empty!  I would have sworn to it!  (Even though my Southern Baptist Grandmother would not have approved of swearing…)  I had done everything I could to get more out, but I’d come up short.  From where had she summoned this elusive toothpaste?

I was so struck by this moment, that I remember talking about it with my grandfather – Papaw – later in the day.  After I had recounted the story to him, and shared my amazement, Papaw responded matter-of-factly.  He said, “You know, Jon Mark, that’s why I married your Grandmother – because she can get toothpaste out of an empty tube.  I can’t tell you how much I’ve saved on toothpaste through these years.”

And, of course, I believed him.  This was the same man who had me convinced for years that appendicitis was a dreaded disease that one could get from eating chocolate pie.  And even though I’ve since learned better, I’ll admit that I still don’t really like chocolate pie – so deep was his influence.

But that weird little anecdote from my youth has stayed with me through the years.  I can’t tell you how many times I’ve thought of that day when I’ve been brushing my teeth as an adult.  I thought of it this week, because the tube appeared to be empty, and yet, I squeezed out a few more days’ worth of brushing.

But the part that really stuck with me this week was the part about Papaw declaring that that was “why” he had married grandmother.  At the time, I believed him with all of my heart.  As a young child, not really understanding marriage, it made sense to me.  If you’re going to get married, you might as well marry someone who can help you save on toothpaste.  At the time, it seemed as good a reason as any.

Of course, now I know better.  Part of what I know now, is that my Papaw just had that particular dry brand of humor that permeates so many Richardsons of our little branch.  And the other thing I know is that he wasn’t exactly lying, either.  The truth is, the story of the toothpaste is just one tiny example of my grandmother’s creativity and ingenuity – qualities that helped to sustain them through both good and challenging times in their more than 50 years of marriage.  And while I would be willing to bet money (again – something Grandmother would never approve of…) – I’d bet money that toothpaste wasn’t remotely on Papaw’s mind when he determined to marry Grandmother, I bet he was thinking of those deeper qualities – those things that defined her character and her personality.  It’s just that one of the ways those qualities would get lived out in my own experience was through finding a little more toothpaste where there had seemed to be none.

In the Gospel lesson that we read today, we hear other proclamations from Jesus that, on the surface, seem almost as counterintuitive as marrying someone for the toothpaste savings they could offer.  They don’t make sense.  They don’t seem to add up to the full face-value of what we’d come to expect from Jesus.  He’s saying that his purpose on this earth is to tear families apart.  That his purpose on this earth is not to bring peace, but a sword.

It’s hard to hear these words and to imagine that they belong to the Jesus of peace and justice and reconciliation that we encounter so much in the rest of the sacred story.  But the deeper truth isn’t always in the words as much as it is in the idea.  And the bigger idea that Jesus is sharing with his disciples is that he will give them a new way to see the world.  That the truth that they had taken as gospel before, is now – through the new wisdom that comes from knowing Christ in the world – it just doesn’t make sense anymore.

The world has told you that value only rests with a few – the wealthy and the leaders and the powerful – but in the new world order that Jesus promises, even tiny sparrows, which are indisputably of basically no value – even they will have value.  And though the powers and influencers of the world may tell us that we are of little or no value, aren’t we at least worth more than sparrows?  And, not only are we worth more than sparrows, even the very hairs of our heads are valuable to God.

So the deeper truth is that the ways that we had ordered the world before don’t make sense when seen through the wisdom of God.  That’s the deeper truth that has sustained our relationship with God through these centuries.  The church has made mistakes.  We’ve too often fallen in line with the powers and influencers of the world, and we’ve failed to see value everywhere God does.  But the truth that sustains us, even in the midst of our failings through the years, is that the message of Jesus does shake us up.  It does force us to see the world in different ways than our own imperfections and limitations would reveal.

The secret to seeing beyond our own limitations, and to begin seeing the value that God sees is pretty simple.  The tradition of our faith tells us that as everything was created, God looked at it and saw that it was good.  And the message of Jesus tells us that through Christ, the lens that God uses to see the world, everything is filtered by love.  To step outside of our own failing proclivities and to try to see the world the way God would have us see it, that’s all we need to remember: all of creation starts with goodness and is filtered through love.

It’s simple to understand, and it takes a lifetime to practice.  But working at seeing the world as good and beloved, that will shake up the world – or at the very least, our perception of it.  Things won’t make sense from our current perspective, but they will align us with God’s perspective.  And that is the goal of the Christian message.

We may not understand the details.  But what we can do is work at aligning ourselves with God.  That’s the deeper truth that unfolds beneath the words that shake us up.  Thanks be to God.  Amen.
St. David's; Kinnelon