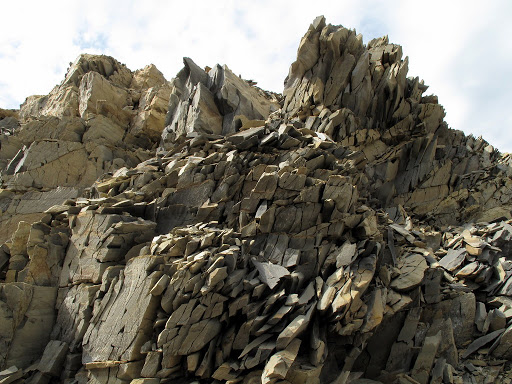 In the name Christ, our sure foundation.  Amen.

I’ve always loved unlikely heroes.  I’ve spoken before of my love of The Sopranos – where the main protagonist is a mob boss we all somehow find ourselves rooting for.  I’ve talked about Dexter and Breaking Bad, where the stories center around the experiences and psychologies of a serial killer and a narcotics manufacturer.  And the same is true of my favorite books and movies.  I like characters that aren’t black and white – whose stories are complicated and never “cut and dried”.

So it’s no wonder that I’ve always had a fondness for St. Peter – this Apostle who is lifted up as a leader by Jesus, but who also pretty regularly gets himself into trouble.  This is the “rock on whom [Christ] builds the church”.

We think of “rocks” in a metaphorical sense as being the solid foundation.  Images of strength.  They elicit thoughts of immovability, steadiness.  But just like Peter and all the other improbable heroes, rocks are almost never perfect.  They’re jagged.  They aren’t typically particularly beautiful all on their own.  Even diamonds – the image of romance and perfection and permanence – they don’t start out that way.  Before they’re polished and cut, they’re hardly recognizable as the symbols of status and perfection that we usually imagine.

Not long after this exchange between Jesus and Peter – when Jesus lifts up Peter and places so much hope in him and his ministry – Jesus gives Peter one of his most memorable rebukes: “Get behind me, Satan!”  And remember – Peter is the same one who, when put to the test just before the crucifixion, denies Jesus three times.  He is an imperfect heir.

It’s hard to wrap our minds around this kind of imperfection.  And I think it’s become harder here lately, even, than it used to be.  Hyper-partisanship in our political life has led to many people falsely viewing the world in black and white, good and bad, right and wrong.  There are certainly things in the world that are right and things that are wrong, but it’s rare that life is that simple.  Usually there are shades of grey.  Usually it requires a bit more thought and discernment.  Dichotomies are easy, but are often wrong.

Sometimes, nowadays, you’ll hear people talking about or expressing “cancel culture”.  It’s the pattern that has emerged wherein people, places, and things are found lacking in some way – and admittedly sometimes very significant ways – so they get “canceled”.  Like a TV show with bad ratings.  An effort is made to simply erase them.

Well, maybe sometimes that’s good.  Maybe we should “cancel” systems of oppression like racism, misogyny, homophobia, and other kinds of bias and the people that constantly perpetuate them.  But more often, peoples’ lives and experiences are more nuanced than that.  More often, people who make mistakes are just doing the best they can, and just need to learn a little more, experience a little more, and grow a little more.

None of us is perfect.  That doesn’t mean we should just flippantly excuse each other’s failures, but it does mean that we can try to interact with each other with a bit of grace, even in the midst of holding one another accountable.  And if someone isn’t willing to grow or learn, or if they’re consciously attacking another for their own personal gain, then sure.  Cancel them.  But for most people we know, that’s not the whole picture.

The rock on which the church was built was imperfect.  It had some sharp edges.  It wasn’t always beautiful.  And Jesus knew that.  Jesus knew that none of us could be everything the world needs.  The point isn’t in finding the perfect person – and it certainly isn’t expecting perfection out of everyone we meet.  That’s an ideal that will leave us constantly disappointed and constantly exposed as hypocritical.  The point is finding the best of us that emerges when we work together.  The point is being a foundation – not because any one is perfect, but because we’ve got to start somewhere.  And we start with what we have, and hope and pray that by grace we can build something better.  Something stronger and more beautiful than we were on our own, that will last.

I love that this church of Jesus Christ that we lean on so heavily has been founded on an imperfect rock like Peter.  That means there’s hope for all of us.  There’s hope that in all of our failures and imperfections, we, too, can be a founding rock for something bigger and better than just ourselves.  Thanks be to God.  Amen.