Faith to nurture the broken places 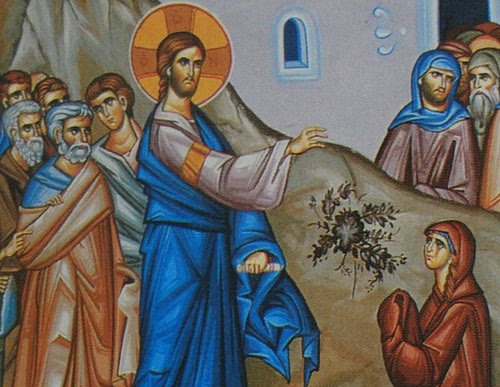 A little behind-the-scenes look into liturgy planning for us here at St. David’s: on occasion, there are optional texts in our assigned readings.  In lectionary guides they will usually be set apart with parentheses or brackets.  Almost every time one of those options in the readings comes up, I opt out of the optional part.  The only exceptions happen when the optional part includes something that I think is critical to the understanding of the passage, or at the very least, critical to what I plan to say in my sermon.  But that’s almost never the case.  Typically, whatever I find myself inspired to say just comes from a part of the reading.  Usually that part is set in the context of the whole, but the crux of what I need is just in a part.  The stories of the Bible are so rife with meaning, that most any small part yields plenty of fertile ground for reflection.  Moreover, in these days of pandemic-influenced liturgies, time is of the essence – so the more we can cut to keep us under our time limit, the better.

But this week was one of those rare exceptions.  As you’re reading the Gospel, it almost feels like there are two stories happening there.  First there’s the riddle of what goes in the mouth compared with what comes out of it.  Then, out of nowhere, we turn to the story of the Canaanite woman who is seeking Jesus’ help with her possessed daughter.

This is a story that I sort of quietly dread every time it comes up in the lectionary readings.  I just hate the way the woman is forced to debase herself to secure the help that she needs from Jesus.  And I hate the way it seems to reinforce some of the worst proclivities of humanity.  On a cursory reading (which is often the most we can hope for among people who use scripture), Jesus comes across as validating the instinct many people have for dehumanizing the other.  She is a woman – a fate which still, inexplicably, is too often an otherizing factor.  And, she was an outsider to Jesus’ Hebrew culture.  By all accounts she had no right to approach him, nor to ask anything of him.  And, by all accounts, she is still the kind of person that too many “Christians” think it is okay to cast aside.

The story of the woman – the outsider – coming to Jesus to seek healing for her daughter becomes a sort of object lesson for what he had just been teaching.

In the optional part of the reading, Jesus is talking about the purity standards that observant Jews were supposed to keep.  When we hear talk in the Bible about “what goes in the mouth” and “hand washing” – that’s really what it’s talking about: purity.  And not just the kind of physical purity that we strive for in singing “Happy Birthday” twice while vigorously washing our hands.  They were outward and physical actions that were meant to cause inward and spiritual purity.  They had to do with identity – the actions that would unite people to the other people of their faith.  But they also had to do with spirituality – the things that their faith taught them to do that would be pleasing to God.

And, in case we still didn’t get it, Jesus encounters the Canaanite woman.  At first, he acts just as his followers might expect: being an outsider – one who doesn’t do the things that they thought one must do to please God – he casts her aside.  But in her faith, she persisted.  In her faith, she would not simply be cast aside.  She lived into the truth that he was just preaching – it’s not what goes into her mouth that would defile (or save) her.  She wasn’t condemned because she didn’t follow the traditions of his faith.  Instead, salvation and grace came from what came out of her mouth: faith.

We all have times when the things that come out of our mouths – the things that come from our hearts – are less than ideal.  Things that in fairness should leave us condemned.  The goal is to strive for better.  The goal is to strive to emulate this other, dehumanized creature scratching to be included in the grace that Christ offers.  Scratching and clawing for grace in faith.  Because it’s that faith that will save us through all the defilement and condemnation we imagine.  It’s that faith that will nurture the broken places within us and around us.

The world needs a little more healing right now.  The world needs a little more faith right now.  Not more people towing the party line or checking the right boxes to get their rewards, but people willing to live with faith.  People willing to do the hard work of finding healing.  That’s the example of the woman who insisted that she was at least as worthy as the dogs.  Because she was.  And we are, too.  May we share her faith.  Amen.