Get behind me, escape pod! 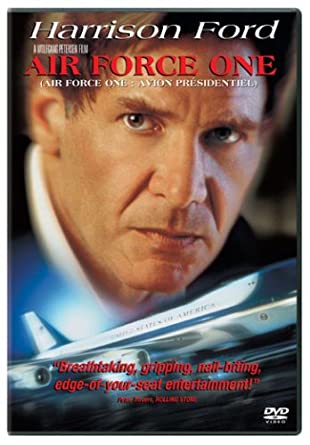 If there’s one area in my life where I am an actual child (and I’m sure Michael will tell you there’s at least one such area) then that would be about my fascination with airplanes.  Like a toddler who shrieks excitedly whenever he sees a dump truck, I am an absolute child when it comes to airplanes.  I often fantasize about learning to fly.  Before moving to New Jersey, I lived right under one of the takeoff paths of JFK Airport and it was an endless source of amusement for me – even if it was sometimes a source of mild frustration in the summer, as the planes roared low overhead while we were having church with the windows open.  But even our own quiet, dusty little airport over in Lincoln Park never fails to capture my attention.  Whenever we drive by, my eyes drift over to watch, as if they were beyond my control.

And while I don’t often get excited about action movies, there’s one – related to my fascination about airplanes, that I could watch over and over again.  It’s the 1997 Harrison Ford film, Air Force One.  In that film, the plane is practically a main character!  The plot of the movie is pretty simple: Air Force One – the iconic, modified Boeing 747 that transports the President of the United States – is hijacked.  Harrison Ford plays the President who ends up saving the day.

I thought of that movie this week as I read this story from the Gospel.  Jesus predicts the suffering he would come to endure and shares that insight with his followers.  Peter – the rock on whom the church would be built – rebukes Jesus.  How could the savior that the people had been waiting for suffer that way?  How could the one on whom they had pinned their hopes endure the indignities of a common criminal?  “God forbid it!”, Peter says, “This must never happen to you.”

This is the secret that Jesus revealed: serving God first means serving.  It’s not about standing in front and getting attention.  It’s not about accolades or power or reverence or respect.  It is about standing with the people.  It is about serving the people.  It’s about getting dirty and getting real – casting aside the fantasies of our basest instincts, and instead reveling in the glory of God’s creation, with all of its challenges and hardships and our own human failings within it.

That’s part of the majesty and mystery of God taking on human form – that it wasn’t some idealized dream of what humanity could be, but it was an honest reflection of the experiences of humanity.  Even those aspects of the human experience that aren’t fun or flattering.

In the movie Air Force One, the plane is outfitted with an escape pod.  So if the plane were to encounter any trouble, at least the President could be safe.  He could load in there, be released from the trouble, and parachute to safety on the ground.  But the turning point in the movie is when the President refuses to go.  He deploys the escape pod to throw the hijackers off his trail, but he stays with the people, and eventually saves them from the assaults of their enemies.

Throughout the story of Jesus, there are a few times when tempters come to Jesus and suggest he take the escape pod – there’s the devil in the wilderness, the thief on the cross…  But Jesus rejects that and stays with the people.  He does “go to Jerusalem” and he does “undergo great suffering at the hands of the elders and the chief priests and the scribes”.  And he is killed.

He doesn’t take the escape pod, because then he wouldn’t be among us.

In these days of pandemic, there is great suffering.  And many have been killed.  And for many more, a way of life seems to have been killed.  And when we look around, we so often see the leaders among us, and the rich and powerful in their various forms of escape pods – with greater access to treatment and testing and services than we average folks can have.  It can be disheartening.

But the savior has stayed with us.  Christ hasn’t left us alone to our devices, but has remained to show us the way.  Peter could never have seen it coming.  As we are called to serve, neither are we called to escape – but to hold fast to the suffering around us.  The Christian faith isn’t about never suffering – it’s about remaining faithful, even in the midst of humanity.  Even in the midst of the ugly parts of the human experience.  Because there is more that is than can be seen.  God is making a way.  God is making a way.  Even now.  Amen.