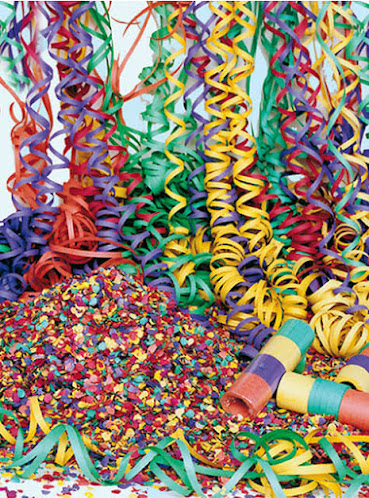 In the name of God who is the giver of all that is good.  Amen.

I heard a story this week of a mother with her 8-year old child riding together in the family car.  While they rode along, the mother’s phone rang and the mother received some good news from her office, so when she finished the call she was decidedly pleased.  In the age of Bluetooth and hands free calling in cars, the child heard the entire exchange.  Seeing the mother’s happiness, the child said, “Do you want me to throw the confetti I have in my pocket?”  The mother shot back, “No! Not in the car!” and after a moment, “Why, exactly, do you have confetti in your pocket?”  The child responded, matter-of-factly, “It’s my emergency confetti.  I carry it everywhere in case there’s good news.”

That, my friends, is the message of Advent.  It’s about living your life like you have emergency confetti stashed in your pocket, just in case good news should come along.  Really – not even “just in case”, but so that you’re ready when it does come.

Jesus speaks of it in more sobering tones, but the message is essentially the same.  The thing that we’ve been waiting for is coming near.  The suffering that has been long-endured is drawing to a close.  And now, for these next few weeks, we set about the task of making ourselves ready for that day.  We stuff our pockets full of confetti.  Because though Jesus says, “about that day and hour no one knows”, we know that day and hour are coming.

The thing about Advent is, we talk about it as “preparing for Christmas”.  And about that day and hour, we do know.  It will be December 25th.  Whether we’re ready or not.

But closer still is an idea that’s more elusive – one that’s harder to pin down in words.  Really, Advent is about making us ready for a feeling.  We may not even know what that feeling is – maybe we’ve never felt it, or maybe it’s been a long time and we can’t really remember it.  But it’s that feeling of surprised joy.  It’s the feeling of something we’ve been expecting, but that in reality is better than we’d imagined.  It’s the feeling of promises fulfilled and dreams realized.  The feeling of touching hope – in that moment when hope gives way to experience; when faith gives way to understanding.

That’s what I imagine new parents must feel when they first meet their child – so it makes sense that the metaphor we use for meeting Christ in the world is the birth of a baby.  It’s the closest most of us can come to imagining the way reality can beat expectations into dust – the way God’s truth can overshadow our meager imaginations.  Because the thing that this Advent is building toward is more than the birth of Jesus.  It’s more than a holiday or a celebration.  It even more than marking the starting point of our faith.  Advent is about making us ready for the unexpected joy of meeting Christ.

And about that day or hour, no one knows.

We can’t pin it down on the calendar.  We can’t even pin it down to a season or a celebration.  We could meet Christ at any moment.  We could be bowled over by that joy and peace in believing at any time, whether we’re ready or not.

Advent is about trying to make ourselves ready for something we couldn’t possibly expect – because while we can’t really prepare, the best we can do is to try to make space in our lives so we don’t miss it.

Through the course of this pandemic, Michael and I have sometimes been a little lax about housekeeping.  We know it’s only us in the house, so why beat ourselves over the head with the chores and duties of normal living?  This life we share right now isn’t normal!

And our efforts at keeping ourselves and each other safe has led to some less than desirable habits.  We’re not going to the grocery store as much, so we end up buying more than we normally would if we were just running in periodically to get what we need for a given meal or a given few days.  Planning so far in advance, we never really know fully what we’ll need, so our shopping lacks precision – like identifying an object with a flood light instead of a laser pointer.  So our large dining room table has served as a sort of “overflow pantry” for a lot of the last several months.

This week, Michael insisted we clean off that table.  I sort of groaned, at least internally.  It was just going to be us for Thanksgiving – did we really need to go to the extra work of making the table beautiful?

But of course Michael was right.  We needed to make space for some extra beauty in our home – at least on Thanksgiving.  Even if our circumstances right now mean that we can’t maintain it all the time, at least for now, we can “stuff our pockets full of confetti”.  For this one day, we could be ready for something special.