The love that they've left behind 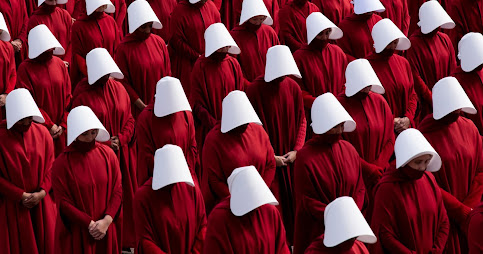 In the name of God, through whom we live and move and have our being.  Amen.

Not too long ago, I suppose because we’re gluttons for punishment and hadn’t experienced 2020 fully enough yet, Michael and I started watching The Handmaid’s Tale.  Pretty much, that’s how our TV viewing typically goes – after everyone in the world has been talking about some show for a few years, we’ll finally decide that perhaps we should watch it, too.  Then, several months, or maybe a year later, we’ll actually start.

The story of The Handmaid’s Tale reimagines our present existence as a dystopian reality, where the United States has been overtaken by a theocratic, pseudo-Christian regime.  Birth rates around the world had plummeted to near-zero, and panic had struck about the future of humanity.

In this new American theocracy, women who have proven to be fertile become enslaved to help breed children for the ruling class.  These women are called “handmaids” and the show follows the story of one of these women, and her friends and experiences.

In one of the (many) striking scenes, we’re told a story of her early experience of going through brainwashing.  As a way of trying to subdue these women, a passage from the gospel we read this morning was often quoted to them – but it was only ever quoted in part.  Their overseers would say, “Blessed are the meek” – just after cattle-prodding a woman for failing to be sufficiently “meek”.  Our heroine, however, had read the Bible.  And she finished the sentence, “…for they will inherit the earth.”  Of course, her knowing that part of the verse didn’t play well with her captors.  She was punished mercilessly for quoting the rest.

It’s a parable about the dangers of those who proclaim biblical literalism – how small quotes almost never capture the whole, or even enough, of the greater message to be genuinely useful.

But now, here we are, with two weeks in a row, where the message of Jesus is so clear and unambiguous.  Last week we had the two great commandments – you shall love the Lord your God with all your heart, and soul, and mind, and you shall love your neighbor as yourself.  And this week, we have a similarly clear approach to understanding God’s vision for us.  The clarity this week, however, isn’t a simple, “What you see is what you get” thing, though.  What’s clear is that God’s vision for us is so different from our own visions for ourselves that it’s almost just the opposite – it’s enough to turn the world around.

I love that this reading – this selection from the Sermon on the Mount called the Beatitudes – is what we read on All Saints’ Sunday two of the three years in our cycle of readings.  We talk about the saints – both those who are known to the whole church and those who are known only to ourselves in the quietness of our experience – as a “great cloud of witnesses”.  But witnesses to what?

I would say that they stand out in our minds as witnesses to another way.  While so much of the world might seem only focused on itself, and its own benefit, and its own continuing – these witnesses we remember today stand out for caring about more than themselves.  They stand out, if nothing else, for existing beyond themselves – and they do exist beyond themselves and their own limited experiences, because we’ve remembered them here today.  The live on in memory and influence.  They live on in the love that they've left behind.

The marriage of these two lessons is profound: love the Lord your God with all your heart, and soul, and mind, and love your neighbor as yourself; and, let the love of God turn the world around.  Because the truth is, if you really commit yourself to living according to the two great commandments that we heard about last week, the “turning the world around” that Jesus is preaching about this week will be the natural outcome.

It may not feel like we’re changing the world, but that’s the only way the world does change: through the actions of those who mean to change it, even if only in part.

Think about these saints we honor today.  The famous ones.  The ones who have churches named for them.  The ones printed in books.  But also the ones whose names and memories are held only in our own hearts.  None of them were perfect.  But the common thread through them all is that they did something.  They loved someone.  They touched some life and made the world a little better place in some way.

If we commit to loving the Lord our God with all of our hearts, and souls, and minds, and love our neighbors as ourselves, we will, too.  We will change the world.  We will help God turn it around.  Thanks be to God.  Amen.