The Good Times are Comin' 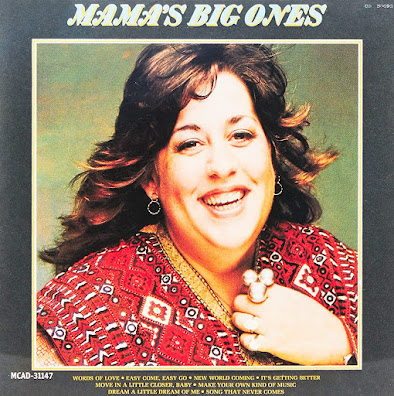 In the name of the God of Hope.  Amen.

When I was in college, the campus ministry that I was a part of met each week, and one of the traditions we had was to write something that we were thankful for on butcher paper spread across the altar.  When our pastor led the prayers, he would include those occasions of thanksgiving each week.

One week – maybe more than one, I don’t really remember – my offering of gratitude was for Mama Cass – Cass Elliot – from the Mamas and the Papas.  Her greatest hits album, Mamas Big Ones is in the upper tier of my favorite albums of all time.

One of the songs from that album couldn’t escape my focus this week as I read the Gospel lesson for today.  The song is, “The Good Times are Coming”.  It’s vaguely mournful melody begins with a simple chorus, almost like a lullaby, that says, “The good times are comin’, They’ll be coming real soon.  And I’m not just pitchin’ pennies at the moon.”  And those words of hope are reiterated throughout, again and again, almost as if she’s pleading them into truth.

I thought of that song this week, because, in a lot of ways, that’s what this feast day today is about – hope.  It’s about looking forward to something that’s better.  And expressions of hope are always, at least some degree, expressions of faith.  It’s the hope that under the reign of Christ, good times are coming.

In the Gospel lesson that we read today, I usually get stuck at the separation – the sheep and the goats, the good and the bad, the righteous and the accursed.  But this time, before I could get to those troubling parts that perennially give me such pause, I heard those first lines of the text we read, as if for the very first time: “When the Son of Man comes in his glory, and all the angels with him, then he will sit on the throne of his glory.”  Good times are coming.

The truth is, in our popular culture, hope has been in short supply lately.  If you’re on Facebook, you may have seen some of those memes that have been going around.  They say, “If 2020 was a….” and they fill in the blank with something common – maybe even something good, and show how bad it could be.

One was, “If 2020 was an ice cream cone” and it shows and ice cream cone filled with the grey slush that lines the roads a while after it’s snowed.  Another said, “If 2020 was a bag of chips” and the graphic is a mockup of a bag of Lay’s potato chips advertising a new flavor: orange juice and toothpaste.  “If 2020 was a hula hoop” shows a coil of barbed wire.  Google it – you can entertain yourself for a while.

But what it does show, in reality – not just as a matter of humor, is that 2020 has been hard on everyone.  Even if you have been mercifully spared the worse of the ravages of the coronavirus – which fewer and fewer of us have been – but even if you have missed that, none of us have had it easy this year.

It’s not to say that we haven’t had blessings – we certainly have.  And it’s not to say that there haven’t even been good things that have come out our experiences this year – there are.  We’ve learned things.  We’ve grown in ways that “normal” never would have made space for.  We’ve had to keep pushing ourselves, and some of it has been good.

But the Christian message is always one of hope.  The good times are coming.  If faith in Christ can teach us anything, it’s that the pain at the “end” is never really the end.  Christ, who suffered on the cross and who was buried in the tomb, brought new life on Easter morning.  And here, at the end of our liturgical year – the end of a year of hoping and preparing and celebrating and learning – even here it’s not really the end.  We’ll be back next week.  Ready to hope again.  Ready to prepare for the birth of Christ and ready to look to the future.

This week we heard hopeful news about the development of vaccines that could bring an end to this pandemic – that could bring us a return to something that feels a lot more like normal than anything we’ve experienced these past nine months.  But even in the midst of that hope for a return to normal, we know that we’ll be changed.  We know that the normal that emerges will never be entirely normal like it was before.

We live in that hope.  That hope lives in Christ.  Amen.