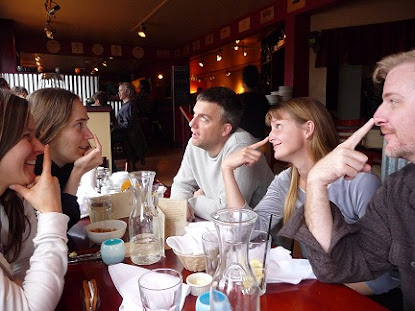 Back in the days when I was working primarily with young people in a couple of different churches, they had this pattern for avoiding various duties and jobs – they would touch their noses to indicate “not it!”.  We’d be looking for volunteers to bag up the trash after supper – suddenly fingers would start flying toward their noses, and the last one to recognize what was going on and whose nose was left uncovered would be the one to have to do it.

But where I really learned this trick was when I was asking for volunteers to pray – over a meal, or to conclude our time together each Sunday night, or something like that.  Before I knew the secret, I was always left as the one with the uncovered nose.  But the point was, I was trying to teach them to pray, and to make them more comfortable talking with God.  I didn’t want them just relying on the “professional Christians” to pray for them – I wanted them to learn that they could do it, too!  But you can’t violate the unspoken rules of engagement among teenagers, so the first few times, my teaching moment was lost.  I had to pray.

Eventually I caught on.  When I went to ask for a volunteer to pray, I was already moving to touch my nose.  I thought of that again this week, reading this Gospel lesson.  I heard John say, “I am not the Messiah,” and in my mind’s eye, he was touching his nose to say, “Not it!”

In the company of adults, however, that phrase, “I am not the Messiah” can be pretty empowering.  Not as a way of shirking responsibility, but as a way of giving ourselves a break – a way of giving ourselves permission to follow our own callings.  Like John, we are not the Messiah.  We are not called to save the world.  We’re just called to make it a little better.  We’re called to prepare the way of Christ – not to be Christ – for ourselves, or for anyone else.

In this year, when so many aspects of our regular lives are outside the ideal – sometimes very far outside the ideal – it’s important for us to remember that we’re not the Messiah.  We aren’t called to have all the answers, or to fix everything for everyone, or to heal all the hurt that exists in the world.  And this urge is particularly strong as Christmas approaches: We don’t have to give the best presents.  We don’t have to perform miracles – making things seem normal and happy in ways that they’re obviously not.  We don’t have to invent some process, or system, or experience that will make up for everything that the people we love are lacking – or even for the things that we, ourselves, feel are lacking.

I always chuckled when the kids started reaching for their noses to call, “not it!”  And the thing was, whenever a kid did “lose” and had to pray for everyone, they pretty much always realized it wasn’t as bad as they’d feared.  I suspect some of them even started to break down those walls that they’d built thinking that they couldn’t turn to God on their own.

But John’s “not it!” is deeper.  In saying, “I am not the Messiah” John was giving us permission to say the same thing.  John – Christ’s own way-maker – was making the way for us to embrace our own callings, too.  And we are called to follow Christ.  That looks very different for each of us – we each follow Christ in our own ways and along our own paths.  But the one thing we all share is that we follow.  We are not Messiahs.  We are here to help make the way for others – so that everyone can know the saving love of Christ.  Amen.