A leap of faith, together 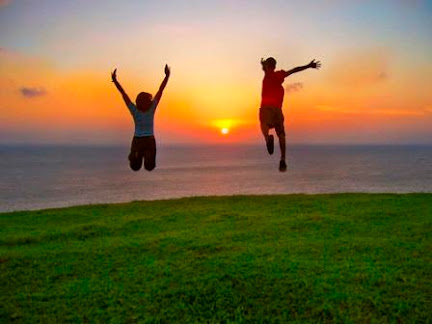 In the name of Christ, for whom we wait.  Amen.

Earlier this week, I learned that my favorite television show, The West Wing, is leaving Netflix.  I have the series on DVD, but it’s just not as convenient as just being able to pull it up on the screen.  So I’ll miss having it so handy.  As I think back on that series, there are just so many smart lines, and wise stories.

But one, in particular, that has been on my mind this week was the story of Toby Ziegler, the White House Communications Director, hosting the newly-minted Poet Laureate.  It had come to the attention of the White House that this Poet Laureate was planning to make political waves in a banquet that was being given in her honor.  She wanted to speak out against a policy in the administration that she disagreed with.  As the two debated whether that was appropriate or not, she delivered this line that has stuck with me.  She said, “You think I think that an artist's job is to speak the truth.  An artist's job is to captivate you for however long we've asked for your attention.  If we stumble into truth, we got lucky, and I don't get to decide what truth is.”

For most of us, our efforts at following God’s will are sort of like that.  If we stumble into the truth, it just means that we got lucky.  And none of us gets to decide what the truth is.  We use the resources of the faith and the wisdom of the ages to try to discern what is right, but in stepping out, there’s a degree to which it is always something of a guess.  Or, to put it in a context more comfortable for the church, it’s a leap of faith.  Most of us don’t have the path God offers us laid out before us as clearly as Luke’s Gospel suggests that it was for Mary.

In this, the early part of the story of Jesus as it is recounted by Luke, we hear that Mary was visited in the night by the angel Gabriel.  And this angel told her that God has a plan for her.  A strange plan.  Maybe even a crazy plan – something that truly has never been done before.  God had chosen her to nurture and bring a savior – an anointed one, a messiah – into the world.

Our popular image of Mary is that she smiled, beatifically, and submitted.  But even this shorthand version of the interaction from the Gospel of Luke suggests that it was more than that.  The story speaks of Mary questioning the situation – perhaps even arguing.  She points out faults in the plan, and wonders why she had been chosen.  I wonder how long it took Gabriel to convince her to come along.  I wonder if Mary just gave in because she was so tired in the middle of the night.  I wonder if she could have possibly grasped the significance of what was being asked of her.

But even though she had the path clearly laid out before her, the union of our experience with that of Mary is right there – even if she understood the weight of what was being asked of her, she couldn’t have imagined what all it would mean: for her life, for Joseph’s life, for the life of her unborn son.  Though she had the rare benefit of knowing as clearly as anyone can know that she was on the right path – the path that God had ordained – she still was stepping out into a future she couldn’t imagine on her own.  And whenever we follow God’s path – even if we think we know where it’s leading – that path involves a future beyond our imagining.  No matter how audaciously we might dream, God dreams bigger.

The story of Mary, while it may seem sort of fantastical and outside of our realm of understanding, prepares us for just how big God can dream.  It prepares us for that truth that “nothing will be impossible with God.”

And the further truth is in the fact that God didn’t just give Mary a job.  In this announcement the angel also told Mary that God had given her a companion, too.  Another miracle-holder to share in this journey.  Because of Elizabeth, Mary wasn’t alone.

Even if we may feel very alone right now, this path that God has put us on is not a path of solitude.  God has given us companions in this journey in each other.  Even though it’s harder to be together in the same room, nothing can keep us from being companions together in this journey.  That’s the beauty and the gift of Christian community.  That’s why it’s important to be a part of a community and to give yourself over to growing in faith in a community.  It’s not because God can’t work on us when we’re alone.  It’s because we don’t have to be alone.  It’s because God has given us companions on this journey – other miracle-holders so we can support one another along the way.

These weeks have been preparing us to see Christ – to meet Christ in new ways, because Christ is always being made new.  Now, as this season draws to a close, we are reminded that God has big dreams for us, and we’re not alone.  And knowing that is a huge step toward making us ready to meet Christ.  I pray that we all do – this week, in Christmas, and throughout our lives in faith.  Amen.