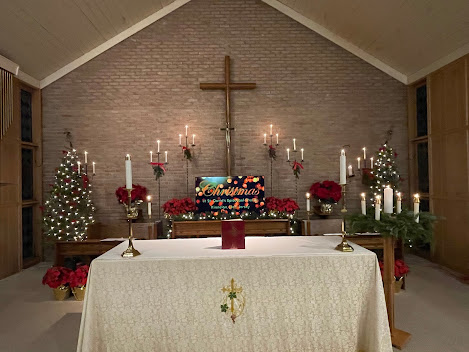 In the name of Christ, our light.  Amen.

Every year at Christmas time it’s hard to avoid thinking about these metaphors of light and shadow.  They appear in scripture, like we read today, but they also feature heavily in our rituals and traditions.  I was thinking about that the other night coming home from a late-night trip to the grocery store – we’ve taken to making our grocery runs just before the stores close to try to avoid crowds as much as we can.  But on that drive, I delighted in seeing all the houses that were dressed in festive lights.

But, as much as that is a normal part of our Christmas experience every year, it seems a little more pointed this year.  Earlier this week there was the “great conjunction” – when Saturn and Jupiter, from our perspective, appeared to move so close to one another as to almost meet.  And this conjunction, while not entirely uncommon, did appear to bring the two together with an uncommon closeness – closeness that hadn’t been achieved in centuries.  This kind of close conjunction has sometimes been called the “Bethlehem star” because is a brighter pair of lights in the sky than we normally find, and some have supposed it must have been what it was like when that star was said to have rested over Bethlehem to announce the birth of Jesus.

But we didn’t see that “Bethlehem star”.  In our little corner of the world, we were veiled under the shadow of clouds.  On the longest night of the year, there was a point of light reaching out to us, but we missed it.  Not because of our ignorance, or because we had better things to do, but because our circumstances kept us from seeing the light.  Something stood in the way of that great light in the long-night sky.

Most years, for most of us, the symbolism of light slowly growing through Advent until bursting out into brilliant streams of light on Christmas is just that – a loose symbol, a metaphor, but not something particularly tied to our own personal experience.  We’ve all experienced challenges, of course.  We had hardships, and even tragedies – but for most of us, those times were episodic, not definitive.

That’s the beauty of this Advent to Christmas transition.  We started, weeks ago, with one lone light on this Advent wreath beginning to pierce the night.  And slowly, that light grew.  Week by week it showed more of itself, until, at last, last night in the fever pitch of our celebration is exploded!  Bright light filling every corner, leaving none of us in the shadows.

Last night and today, we’ve got 27 candles up here – as opposed to our usual two.  We’ve got lights on the tree and on the garland, and everywhere we could make it stand still.  Because that’s the way the light of Christ pierces the long nights of our lives.  It opens up and overflows into everything, onto everyone.  The light shines where it will, and we can’t stop it.

The long night of this year will pass.  The vaccines will keep going out, and in time, the need for protection and isolation will wane.  But, as we find our way out of the shadows, remember those who’ve been left behind.  Remember those still struggling to see in a night that’s not yet broken into day.

The light of Christ has shone on us and blessed us with clarity and vision in the new day.  Now, our job is to share that light with everyone else.  Our job is to carry the light into all the shadows that remain.  We have seen Christ’s glory – full of grace and truth.  But it’s not ours, alone.  Share the light.  Share the glory.  Share the blessings that have been so abundantly shared with us.  It was all meant to be shared.