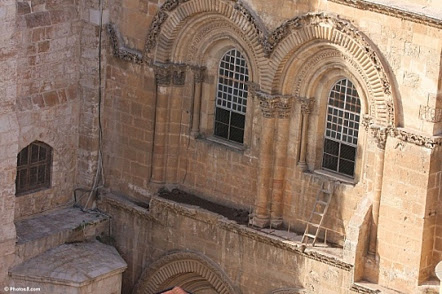 In the name of God, the mover and disrupter.  Amen.

A favorite story of mine from the Holy Lands is the story of the Immovable Ladder at the church of the Holy Sepulchre.  You’ll notice that those first letters “I” and “L” in “Immovable Ladder” are capitalized.  That’s how deeply ingrained this story is in the life of this ancient building.  And anyone who visits the church is likely to notice the ladder – situated on a ledge above, and just to the right of the main entrance into the church.

The Church of the Holy Sepulchre is one of the holiest, and most revered sites for all Christianity.  Tradition holds that it encompasses the exact spot of the crucifixion, and the exact spot of the tomb in which Christ was laid – and as such, the exact spot of the Resurrection.  And there are other points of devotion throughout this labyrinthine building.  One of my favorite spots is a little underground chapel that honors the rock onto which Jesus’ blood is said to have poured when he was pierced in his side.  As you walk down to this chapel, on stone steps that sag beneath the friction of centuries of pilgrims’ footsteps, you can see hundreds – maybe thousands – of crosses carved into the stone walls.  Again, as centuries of pilgrims wanted to mark their journey.

But, as a place so revered by so many people for so long, it’s probably no wonder that there is controversy around it – specifically around who controls it.  These disputes have sometimes even been violent.  But through the centuries, a sort of fragile peace has emerged among the six major Christian groups who have laid claim to the space.  But even so, that agreement is tentative at best.  The roof of the church is controlled by the Coptic Christians of Egypt and the Ethiopian Orthodox Church.  And even the two of them disagree over the specifics of that arrangement.  To maintain their claim on the space, a Coptic monk is permanently stationed on their section of the roof.  In 2008, in order to try to sit a bit more in the shade, he moved his chair by about eight inches.  The move was seen as hostile by the Ethiopians, and a major fight broke out between the two groups.  Eleven people were hospitalized before it was all said and done.

It’s in this tense context that we understand the story of the Immovable Ladder.  No one knows exactly how long the ladder has been there.  It was first referenced in writings in 1728.  And no one knows who put it there, or why.  Perhaps a repair was made.  Perhaps a break-in was attempted, but was thwarted before the ladder could be removed.  But now, no one dares move the ladder – for fear that it will set off a violent conflict between the various custodians of the space.

I thought of that story this week in the context of this gospel lesson, because I’m sure no one had imagined money changers, and loan sharks, and solicitors in the temple when it was initially built.  They weren’t there because Jewish law required that they be there as a part of the worship of God.  The situation has just sort of crept up over time.  By the time of Jesus, it had gotten out of control.  But it had happened so slowly that no one seemed to really notice.  It was just the way it had always been.

And that’s the real meat behind this story in the life of Jesus.  His anger is important.  His attempt at restoring purity to the place of God’s worship is important.  But I think the thing that really has the deepest impact on us and on our own expressions of faith today, is the aspect of Jesus disrupting something that, while not ideal, was so commonplace that people just didn’t see it anymore.  In that moment, Jesus made the people see something that they had seen every day in a different light.

Now, the Christian church that exists with that moment in its ancestry, still, too often holds onto things that aren’t ideal for us, but that have become so commonplace that we just don’t see them anymore.  Like the Immovable Ladder at the church of the Holy Sepulchre, all of our churches and dioceses and denominations, and even most of our own personal understandings and expressions of the faith – they all have their own “immovable ladders” – their own things that we dare not touch, because we don’t want to disturb the fragile peace.  Our own things that aren’t ideal, but that we can’t touch, because we can’t really see them – we’ve just grown too accustomed to them.

One of the gifts of this season of pandemic is that it has made us see the church and our own expressions of faith in new ways.  It has made it impossible for us to just rest on “the ways we’ve always done it” because those ways haven’t been available to us for a long time.

Now, as we barely begin to see the light at the end of this tunnel, we’d be wise to resist the temptation to just rush back into the old normal.  There were ways that our old normal weren’t serving us well.  And in this emerging post-pandemic world that we’re beginning to hopefully see, it’s even more likely that some of our old ways will be even less relevant and effective in the new world than they were in the old one.

So it’s going to take discernment.  There will be things we’ll want to reclaim.  I, for one, can’t wait to reclaim singing, and having the choir back, and not having to force ourselves into distance while striving for oneness as the Body of Christ.  I can’t wait to reclaim some of the fun events we do around here, and the way people used to be able to drop in and visit me in the office if they wanted to chat.

But we also need to think about the things that need to be left behind.  What are the “immovable ladders” that aren’t serving anyone, or that may actually be keeping us apart?  What are the things that we cling to because they’re “the way we’ve always done it”, even if they don’t really seem to work anymore?  Which structures and systems may now need to be torn down, and what others need to grow up in their places?

I’d bet you all have ideas about this.  I know I do, too.  With the same strength of resolve and purpose as Jesus used to disrupt the systems of the temple, we have to bolster ourselves to say clearly what we think needs to go and what we think needs to grow.  We have to be brave enough to have conversations that, perhaps, some would rather not have.  We have to be daring enough to try things that no one has tried before, because we’re moving into a world that no one has lived in before.