Too Simple. Too Complex. 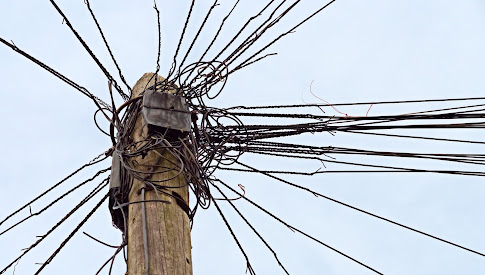 In the name of God, who speaks life.  Amen.

Sometimes, when I read the Gospel as it’s recounted according to John, Jesus seems so hard to follow.

There was a scene in The West Wing when some veterans were attending a meeting in the White House.  As an aside, one of them speaks to an advisor and asks if he can pull some strings at the V.A. to help another friend of theirs get a new wheelchair – the one he’d been using was falling apart, and they weren’t getting anywhere in the claims process.  So, this advisor took the request to the President.  Did he know who should be called to get things done at that agency?

The President’s response was compassionate, and interesting, but it wasn’t particularly helpful.  He said, “Yeah, we’ve got to get things straightened up over there…” and he went on to tell a story about how the term “red tape” had its origins in the early days after the Civil War when soldiers’ records were bound with red tape.

The advisor leaves the room, and the President’s personal aide tries to stifle a response.  President Barlet eventually coaxes it out him.  His aide says, “You know Mr. President, that story about the red tape was really interesting and everything…  But the guy just wanted a new wheelchair.”

Sometimes that’s what it feels like hearing from John.  The gospel story we hear today begins with some Greeks who have come up to Philip – one of Jesus’ “aides”.  They say, “Sir, we wish to see Jesus.”  Word of their request winds its way through the system until it reaches Jesus.  And Jesus responds with tales of grains of wheat, and dying in the earth, and being lifted up in new life in the stalk and bearing much fruit….

Well, that’s all very interesting, but what about those Greeks who just wanted to see Jesus?  We never hear from them again.  Did the need get met?

I think if we’re not careful, Christians can fall into the same trap.  As people of faith, there often aren’t easy answers, and there are two ways that Christians have typically responded to this through history.  One way is to try to over-simplify everything – to reduce the Christian faith to little more than a set of moralistic rules, or things on a list to be ticked off as they’re accomplished.  But that approach isn’t one that has traditionally been satisfying for Episcopalians, or others in our Anglican tradition.  The Anglican way is typically to struggle.  Not just to find (or manufacture…) some easy answer.

But where we can fall victim is to the idea that there are never easy answers – to overthink and to complicate things even when it’s not necessary.  Sometimes a hungry person just needs to be fed – and we can delve into the systemic roots of hunger and food insecurity later.  Sometimes a grieving person just needs comfort – and we can explore whatever caused that grief once the immediate need has been met.

But John is given to complicated responses.  I once heard a biblical scholar describe the school of early Christianity that followed the Gospel according to John as “the first Anglicans”.  Perhaps these often complicated, non-answers are why.

Even though we could sometimes benefit from a little additional simplicity in our tradition, the fact remains that this response that is reported in the Gospel is what we have.  And, as our Lenten observance draws to a close, and we position ourselves to begin Holy Week next week, the message we hear – while probably not helpful to those Greeks who just wanted to see him – is helpful to us.

As we prepare ourselves to look for Resurrection where it hadn’t been quite so visible before – it’s helpful to hear Jesus’ reminder to us that signs of God’s proclivity for resurrection are already around us.

It’s good to have seeds – but to yield their goodness, we first have to give them up.  We have to agree to lose them – to let them go down into the earth.  Through the mercy of God and through the processes living in the earth, something more will come of it.  But we can’t have that something more until we’re willing to let go of the little we already hold.

The adage we’ve all heard is that a bird in the hand is better than two in the bush.  It reminds us that what we don’t already hold isn’t guaranteed to us.  But the promise of resurrection and new life that comes from God and that we celebrate at Easter is an opposite message entirely.  This message says to let go of what seems secure, and to reach toward what promises to be better.

It’s not an easy answer.  In fact, it’s quite complicated.  To oversimplify it, you’ve probably heard people say, “Let go and let God.”  That’s a good slogan.  And it’s a catchy reminder of the importance of faith.  But in practice, it’s more complicated than just that.  Living each moment in confidence and faith that God is directing us in better ways is the goal, but it’s a goal that’s easier said than done.  It needs to be practiced.  It’s needs to be explored, and tested.  And hopefully, in time, it can become a pattern for us.

There has to be some place between the unnecessary complication and the over-simplification.  That’s where we’re trying to land.  That’s a big part of what this annual ritual of re-living the last days and death and Resurrection of Jesus is about: it’s about finding our place in the story, and finding that our place can change from year to year – or even from day to day; and experiencing for ourselves what we can’t quite wrap our minds around.  Something too complicated for a slogan, but too simple to be tied down by doctrines and treatises.  It’s truth that can only be lived.  Because life is God’s own language.  Amen.