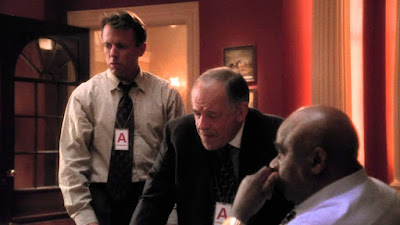 In the name of the God of understanding and of the Spirit of reason.  Amen.

It’s been a while since I’ve had a reference to the old TV show, The West Wing, in one of my sermons, so I figure it’s about time…

There was this lovely episode in the first season where a man – Mr. Willis of Ohio – comes to Congress for his only vote.  He had been appointed to fill the last days of a congressional seat left vacant by his wife’s death.  He was a middle school history teacher, and not a politician like his wife had been.  The insider ways of Washington were largely a mystery to him.

Even though he would only have one vote before being replaced by his successor, it ended up being a pretty important one.  A bill was before the house that would allow the decennial census to occur via sampling, as opposed to physically counting every individual, and the idea was hotly debated.  The White House courted those whom they believed to be “movable” – members of Congress who hadn’t already cemented their positions.  As you might imagine, it was a small number, and Mr. Willis was among them.

While those in the meeting mostly broke down along party lines, Mr. Willis was an aberration.  He listened to arguments and then made his decision on the basis of the arguments that were presented.

Sadly, Mr. Willis was an unusual character.  It’s been 22 years since that episode first aired, and it seems that the Mr. Willis’ of the world are rarer, still.  More and more we tend to have our heels dug in deeper and deeper.  Even the most open-minded among us – and I don’t exempt myself from this judgment – even the most open-minded among us are slow to be swayed by rational arguments and empirical facts.

The example of Jesus lifts this up as an ideal: we should all strive more toward a willingness to hear and to grow.

In the example we read today, we hear the story of a Scribe asking Jesus which commandment is first of all.  Normally, when we hear about the Pharisees and the Sadducees and scribes asking Jesus questions, we typically assume that it’s their futile efforts at trying to trap Jesus into saying something that they think is blasphemous.  But in this rare example – as rare then as it would be today – we hear an honest dialogue happen.

Far from trapping Jesus, and even farther from leaving disappointedly for having failed to trap him, this Scribe basically says, “Yeah.  We agree.  And not only do we agree, but this is more important that whatever else we might disagree about.  This is what’s essential.”  And Jesus agreed and they departed in peace.

It’s an example for us to follow on both sides.  They both interacted with one another with open minds.  The Scribe, with his honest question and his willingness to find common ground in the answer.  And Jesus by not writing him off as merely an opponent – even though countless numbers of the Scribe’s peers had been just that.  Jesus accepted the man as he was, without the burden of presupposition on the basis of those who’d stood there before.

Any group is going to have disagreements.  And it’s hard when that happens.  But it’s easier to handle when we approach disagreements (and even disappointments) from a starting point of grace and respect – when we realize that there is far more that unites us than divides us.  It’s one of the things I love about St. David’s, and in truth, about most Episcopal Churches: we don’t have a litmus test to walk through the door.  We don’t require that everyone fall in line and believe what everyone else believes.  We value each other’s perspectives and opinions.

Of course, not every disagreement is just a matter of two equally valid, though divergent opinions.  There’s a reason that this story of Jesus and the Scribe stands out.  It’s because we don’t have many examples like it.  Usually, the stories we hear of religious leaders questioning Jesus are not stories of curious minds seeking common ground.  They’re usually stories of disingenuous people trying to manipulate him into self-sabotage.

The people who manipulated the crowd into shouting “Crucify him!” didn’t just have a valid difference of opinion.  By the same token, if someone were to come in here and, say, started shouting that we were all going hell – well that wouldn’t just be an honest difference of opinion, either.  But usually, if we would all open ourselves to hearing another side, usually there is some common ground.

It’s notable that there’s nothing in the text about Jesus converting the Scribe.  He didn’t abandon his position of power and prominence in his faith and culture.  The story doesn’t tell us that he left it all to follow Jesus.  Nor does it tell us that Jesus told him he should.  The common ground is the end of the road for them.  The peace that they found in their differing views is the end of the road.

The goal isn’t to all be the same.  The goal isn’t to draw each other all onto the same side of some made up tribal lines.  The goal that’s demonstrated here is just one of personal growth.  Not conversion, just coexistence.  And often that’s enough.  In a world where that simple end is often obstructed, coexistence is just fine.

May God bless us with such openness, understanding, and reason.  And may we use those gifts to stand as an example for the world.  Amen.