The Community is really the "product" 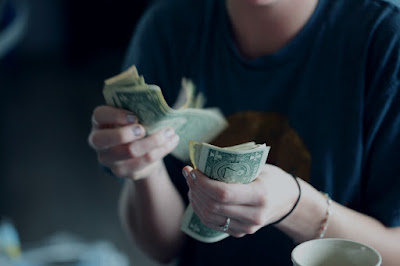 If you thought our talk about divorce last week was pushing boundaries, just you wait.  This week, Jesus has us moving on to money.  Not too long ago we talked about how many people were trained early in life that the two things you should never talk about are religion and politics – well, that adage doesn’t even mention money.  Maybe talking about money is too taboo even to forbid!

The reality is, though, most of us are uncomfortable talking about money.  Like a lot of Episcopal Churches, we’re in the midst of our annual giving campaign right now.  We’re asking each other to prayerfully consider how we can all support the church for the year ahead.  And, traditionally, we come up with a lot of euphemistic ways of talking about this stuff, because it tends to make us uncomfortable.  But the fact is, a big part of what we’re talking about is money.  It’s true that it’s a matter of discernment.  It’s true that we believe our giving to be about more than simply writing a check – it is sacramental in that it represents an outward and visible sign of the inward and spiritual grace of this community.  But it’s also true that it’s about planning next year’s budget.  That’s why it’s happening now – because we need to make plans for how the church will exist and flourish in 2022.  Because running a church isn’t free.  We don’t charge admission like movies, or plays, or sporting events, but that doesn’t mean it’s free.  And, when we find ourselves walking down this path we tend to become uncomfortable.  It all just feels like that sort of thing is a bit too pedestrian to exist alongside the majesty of God.

Because it takes money to run a church, and more specifically, because it takes the contributions of the members of the church, sometimes, when the subject of money comes up, we lose sight of reality.  There are forces within the church that propel us into being a product-driven, consumer-minded organization – no different from any store in the mall, or a hair salon, or Amazon.com.

But in the Gospel lesson that we encounter today, Jesus is pointing us in a different direction.

The wealthy man comes to Jesus and asks him what he must do to “inherit eternal life”.  Jesus asks the man why he’s asking the question.  He was raised right.  He learned about the faith.  He knows the commandments that were handed down from Moses.  He knows that he shouldn’t kill or be unfaithful.  He knows that he shouldn’t lie and steal, and all the rest.  And the wealthy man says to Jesus that yes, he does know, and that he’s been tending to all of that since he was very young.  That’s when Jesus drops the bomb.  The gospel tells us that it’s “love”, but to the man, it felt like a bomb.  “You only lack one thing,” he says, “go, sell what you own, and give the money to the poor, and you will have treasure in heaven; then come, follow me.”

And the gospel tells us that on hearing this, the man went away grieving.  Like so much of the church, he was stuck in his product-driven, consumer-minded perspective.  He couldn’t see that Jesus was trying to show him another way.

But Jesus is trying to show us another way, too.  While the secular forces that drive so much of our life keep us focused on being consumers and acquiring products, Jesus is trying to lure us toward community.  Jesus is calling each of us to be community-driven.  It is as big a shift for us here and now as it was for that wealthy man over there and back then.

The point of this story isn’t to guilt us into giving more.  The point is to encourage us to open ourselves to a new way of seeing our gifts.  While it’s true that there are very practical reasons why the church needs her members to be generous givers; even those very good, practical reasons aren’t the actual point.  The point is refocusing ourselves from being so solely focused on our own needs and possessions, toward being community-driven individuals.

It can be uncomfortable to talk about money in the church, but it doesn’t have to be.  It’s an important part of how we interact with the world.  And, though this community is trying to focus ourselves beyond the temporal realities, we do exist in this world – in this reality.  And Jesus, the one we follow, wasn’t afraid to consider the hard subjects.  So we should be brave enough to try to push through our fears.