Now we really NEED an Act 2!

In the name of God of forgiveness and restoration.  Amen.

In the late 90s there was a movie called Wag the Dog.  It was one of those films that was meant to disrupt us – to make us realize that our own limited view of the world isn’t the only view.  That sometimes, even what we see and understand and even know is just plain wrong – sometimes it doesn’t relate to reality at all.

The premise of the movie is that the President of the United States has become embroiled in a scandal, but it’s right before the election.  He just needed to hold off the scandal for a few days to get through the election.  He needed to distract the American people.  To do this, he hired a man, Conrad Brean.  Though we’re never entirely clear on who Brean is, it becomes apparent that what he is, is a professional distracter – or maybe a professional manipulator.  He is an expert at changing the narrative. 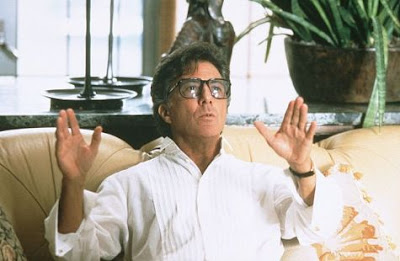 Brean assembles a team to lead this national distraction.  Its first member is a successful Hollywood movie producer, Stanley Motss.  Together, Motss and Brean come up with a plan: they would produce a fake war, much the same way you might go about producing a film.

Everything seemed to be going according to plan – there was substantial public buy-in, the scandal had been essentially forgotten.  But eventually the CIA intervenes.  They, of course, know it’s all a fake.  So they leak to the media that the war has been resolved - that peace has triumphed.

I thought of that this week, because the Parable of the Fig Tree is, if nothing else, a parable of second chances.  And not second chances as we tend to see them – a chance for people to simply “try again” after some error or failure.  A true second chance, where the next effort is nurtured and supported and given all the resources it needs to survive and thrive.

As manipulative and maybe even slimy as Brean and Motss are, for them, Act II was a second chance.  It was an opportunity for them to massage out a future that would take them further than their past had brought them.  The characters in the film are sort of gross, if not mildly endearing, but their experience of trying again after a failure reminds me of this parable.

It's easy to get bogged down in the sweeping judgement of the vineyard owner: “Just destroy whatever isn’t working for me.”  But the destruction isn’t the point.  Honestly, even the grace of offering another year isn’t really the point.  The point is the gardener, and how he promises to use that grace.  He isn’t going to just wait another year and see what happens.  He promises to use the time to give the tree every advantage it might need – to help the tree massage out a future that is better than the past that had brought it there.

We don’t know what happened to the tree.  The parable doesn’t tell us that it worked, and that the gardener returned the next year delighted in all the fruit that the tree bore.  It doesn’t tell us that the stubborn tree still refused to bear good fruit, so it was chopped down and thrown in the fiery pits, where there was weeping and gnashing of teeth.  In this parable, the point isn’t the judgement or the grace, but the effort that the second chance made possible.

During this season, one of the ways we focus ourselves on preparing for Easter is by making space for us to give ourselves over to repentance.  On Ash Wednesday we read the “invitation to a holy Lent” from the Prayer Book.  Mostly, that invitation that begins on page 264 is a description of why we do Lent.  It’s a description of the history that evolved into the traditions of the church.  It says, “[Lent] was also a time when those who, because of notorious sins, had been separated from the body of the faithful were reconciled by penitence and forgiveness, and restored to the fellowship of the church.”

Lent was seen as our annual second chance.

And repentance isn’t just trying again.  Repentance is about reordering ourselves – moving our focus into an entirely different direction than where it was before.  It’s not starting over, it’s a second chance – a chance for us to massage out a future for ourselves that’s better than the past that brought us here.

Not too long ago, I preached a sermon about my love for that line in Eucharistic Prayer B that says to God, through Christ we have been “made worthy to stand before you.”  It’s not lost on me that in Lent, and in using Rite I as a way of reorienting ourselves, we say the Prayer of Humble Access.  In that prayer we say, “We are not worthy so much as to gather up the crumbs under thy Table.”  I know these two things stand in contrast.

So I hope that as you say that prayer, “We are not worthy…”, I hope you’ll remember that those are our words, not God’s.  God’s Word says something entirely different.  And I hope that in saying those words, you’ll hear the quiet whisper of the Holy Spirit behind you speaking the truth that says, “Of course you’re worthy.  Look at everything I’ve done to show you how much I love you – and look at how worthy you are of that love.”

It’s okay to feel unworthy.  It’s okay to strive for something better.  But it’s also important to remember that that’s not what God is giving you.  God is giving you every affirmation that you are more worthy than you can imagine.  As long as you keep turning back, God will keep standing open-armed and filled of joy.  “There is my love.  There is my heart.”

Penitence and forgiveness.  And ultimately, restoration.  That is Lent.  And that is the nature of God.  That is our second chance.  Amen.