"Do not be afraid"

on August 10, 2008
**Note: I know I've been a little remiss in posting since returning from Canterbury. Those last couple of days were too busy to post, and since I've been back, I've just been tired. But do keep an eye out - there will be a few more pics and some "wrap up" reflections coming soon. For now, here's a sermon I preached this morning at St. Peter's, Morristown. Complete with a little Lambeth thrown in for the fun of it!** 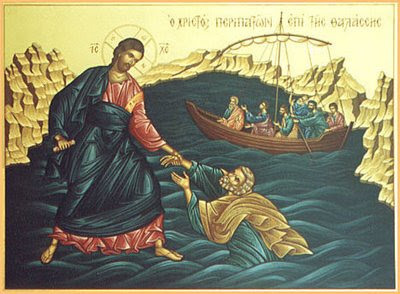 O God of peace, you have taught us that in returning and rest we shall be saved, in quietness and confidence shall be our strength: by the might of your Spirit lift us, we pray, to your presence, where we may be still and know that you are God; through Jesus Christ our Lord. Amen.

We’ve all been there. The storms of our lives blowing around us, everything feels rocky and unstable, we become afraid. We feel so isolated that even the sight of help engenders more fear. We feel so vulnerable that we run away from what shelter we do have. We withdraw from the communities that would have made our perceived solitude untrue.

This is the story of Jesus and Peter walking on water. It’s not the story of a magic trick. It’s not just some story about Jesus going out for a stroll on the lake when he happens to run into his friends. It’s a timeless parable of the human experience.

You can always count on the stories of St. Peter to be that way – to be timeless parables of the human experience. He is impulsive and fallible, but somewhere beneath all of that he is loyal and dependable. He is Peter – the rock – on him the church was built, and whether he is at his worst or his best, he is like us. And like us, even the rock can be shaken by the storms of life.

I’ve spent the last three weeks of my life in Canterbury, England at the Lambeth Conference. It was the decennial gathering of the bishops of the Anglican Communion to discuss issues related to inter-provincial unity. Don’t worry – I’m not planning to use our time together today to present a news report about what happened at Lambeth. That would be hard to do anyway, because nothing really happened at Lambeth. There was essentially no news. No decisions were made. The communion was not dissolved, nor was any relationship within it. We’re all still Anglican. But I do find it providential that we should hear and reflect together on this story – this story of humanity, and our responses to anxiety – on this, the first Sunday after the Lambeth Conference.

If any one word were to define my experience of the Lambeth Conference it would be anxiety. Questions, rooted in anxiety, hung heavy in the air all around us. Would Rowan, the Archbishop of Canterbury, attempt to railroad some punitive, so-called “covenant” across the Conference in a desperate attempt to hold our tenuous alliances together? Would the Bishop of New Hampshire be kept safe in spite of the threats that had been made against him? Would we all be able to communicate effectively in spite of the often-paralyzing cultural differences that separate us? Would the Communion disintegrate around us?

All of these questions, and many more, came out of anxiety. And that anxiety, I believe, was our very human and Petrine response to our Anglican ship having been rocked by the winds of change.

And we are in a season of change in the church. Women and gay and lesbian people are being afforded new opportunities for ministry. Voices from the Global South are beginning to be heard, almost for the first time in the wake of colonialism. Those who had been cast down are being lifted up. Every day the church is changing around us, and its institutional powers are afraid.

In the Gospel lesson this morning we were told that the disciples were afraid. They had been sent into the world while Jesus went up alone to pray. But while they were apart, the disciples began to feel battered by the storms around them. In their anxiety, they could not see Christ in their midst, they could only allow themselves to see more cause for fear.

The story does not begin to shift until we hear again that familiar refrain: “Do not be afraid.” So often, when we find ourselves in the explicit presence of the Holy, our first instinct is to fear. When the angels announced the birth of Jesus, they announced themselves with a plea to not fear. When the women discovered the empty tomb, the figure inside implored them, “Do not be afraid.”

What holy moments in your life have felt like fear? Which fear-filled moments might have been holy?

Even after Jesus announced himself, Peter – the rock – the one on whom the church was built, was not convinced. “Lord, if it is you, command me to come to you on the water.” He needed proof.

Like our sisters and brothers around the Anglican Communion, we of St. Peter’s parish are also being swept by the winds of change. As we look into our future, we are re-imagining what it will mean to be the church in our context; we are re-imagining the kinds of leadership we would have for ourselves; and in the midst of it all, we are rediscovering our own humanity. Like our namesake, we can be impulsive and fallible, but also like Peter, somewhere beneath that rocky exterior there is something more – something truer to whom Christ is calling us to be.

After Peter stepped out of the boat, he paused to notice what he had done. His anxiety churned at his feet and he began to sink back into it. In desperation, he reached out to Jesus crying, “Lord, save me!” and he did.

It’s a timeless parable of the human experience.

When we traverse the seas of life and feel overcome by the often-stormy winds of change, Christ is there. And even when in our fear-filled and desperate search for stability, we remove ourselves from our communities and seek to find the way on our own; even then, Christ is reaching out to draw us back in. When we are at our best and when we are at our worst, Christ is there, holding us up through the storms and luring us on.

Thanks be to God. Amen.
Lambeth St. Peter's; Morristown