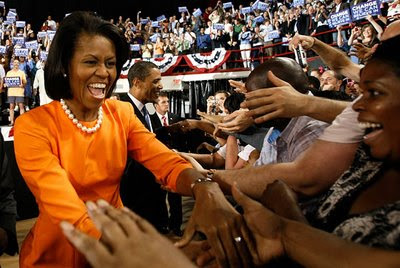 Well, friends... We're only about 3 minutes into the speech, and I just have this to say:

I was SO energized by the idea of the impact that our first woman as President of the United States could have. I was excited about how that step could help to break the binding power of sexism and heterosexism.

But it will be nice to have another strong, independent woman in the White House again - even if not yet in the Oval Office.

I knew I was never going to vote for John McCain. But I think I may have decided tonight to vote for Barack Obama, just because I want Michelle.

Good job Convention organizers. It's working for me!
politics