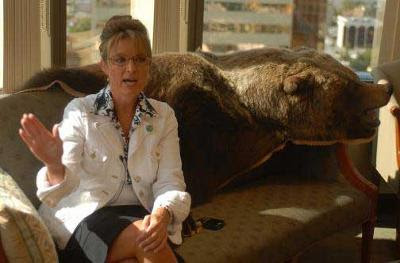 John McCain announced today that he has chosen Alaska Governor Sarah Palin as his running mate in the 2008 Presidential election.

Lots of questions come to mind. The media is already swirling with questions of her experience and her youth. Does being governor of Alaska for about a year and a half prepare someone to be Vice President of the United States? What if she had to be President of the United States? There are already the beginnings of questions about whether or not this is just a stunt to try to change the story from the wildly successful Democratic National Convention and whether or not it's a shameless stunt to try to lure former Hillary Clinton supporters.

But Hillary Clinton said it best: "Were you in this campaign just for me?... You haven't worked so hard for the last 18 months or endured the last 8 years to suffer through more failed leadership."

This isn't just about picking a woman. And I don't think most women who are voters will fall for this.

Which brings me to the question that's been on my mind for the past couple of hours since this has been announced.

The media have been describing Sarah Palin as a "Pro-life Feminist".

The term confuses me. "Pro-life" in itself is something of a misnomer. Almost everyone in the world is "pro-life". There are a few sick people who aren't, but that's rare. It's not even that Palin is an "Anti-abortion Feminist". That would imply that the other side is "Pro-abortion" and that's simply not the case. Many "Pro-choice" folks aren't "Pro-abortion". The reality is that Palin is being spun as an "Anti-choice Feminist".

This just doesn't add up for me. How can you be a "feminist" - someone who supports women's rights - and be defined by your lack of support for women to have the right to choose the medical (or even ethical) decisions that they make?

I just can't imagine that women (and other feminists) of America can be fooled into thinking that the same old song and dance is suddenly okay just because it's coming in new-looking packaging.

It's like the common advertising scheme: "Bold new look, same recipe". If you didn't like it before, a fancy new package shouldn't be enough to sell you.
politics