The devils we know 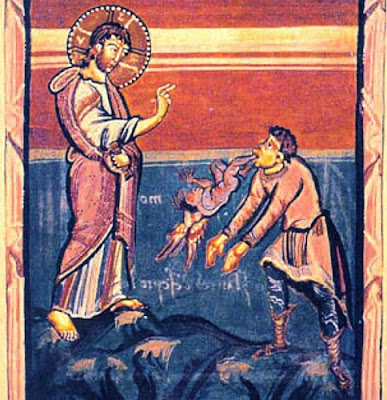 The story we hear in the Gospel lesson today really is quite remarkable.

Of course, there’s the whole casting out demons thing; and then when they possess the pigs that then hurl themselves into the lake and drown – it’s nice flair. But that’s not really what I think is remarkable.

In all of the stories we hear about Jesus, those are the kinds of things we expect. Just in the past few weeks we’ve heard stories about people being healed and raised from the dead. And all of that comes on the heels of the weeks of the Easter narrative, followed by speaking in tongues and the giving of the Holy Spirit.

So really, a demon possession and some pigs that fall into a lake? In the greater scheme of the Christian story, it’s not really all that eye catching. It’s almost surprising that it was remembered enough to have been included in the final copy.

What’s really remarkable, as I see it, is what comes next: when the community sees that the demons who had been tormenting the man, as well as the whole community, have been cast out – they become afraid and ask Jesus to leave.

Usually, when we encounter the stories of the miracles that Jesus performed, they are told with the presumption that the reason they happened was to show Jesus to be of God. Near the end of John’s gospel it says, “Now Jesus did many other signs in the presence of his disciples, which are not written in this book. But these are written so that you may come to believe that Jesus is the Messiah, the Son of God, and that through believing you may have life in his name.”

But clearly that wasn’t the effect in this story.

When the people of the Gerasene community learned that the town demoniac had been healed, and they found him clothed and in his right mind and sitting at the feet of Jesus, they were afraid.

Think about that for a moment.

They had been afraid of the man before. So much so that they kept him shackled and in chains to try to keep him subdued. The demons that tormented him were so powerful that despite his restraints, he would break free and run wild. He was such an outsider that he literally lived outside the normal community. He lived in the tombs among the dead.

So when they found him to be in his right mind, they were afraid.

It really is remarkable.

It many ways, it sounds like some of our communities. We grow accustomed to “the devils we know.”

A running joke among people in church leadership is that the guiding principle of many of our congregations is: “What we’re doing isn’t working. Don’t change a thing.”

It’s easy – and even attractive – to fall into ruts in our lives. Amidst all the “changes and chances” of life, we look for stability wherever we can find it – even if stability often means continuing in unhealthy patterns.

That’s what happened in the Gerasene community. This community, filled with people who are categorically “other” on the other side of the Galilee, is shown to be quite like us, after all. Just like us, they have their own “others”. Just like us, they are afraid to move out of what has become comfortable into a newer and more expansive way of seeing the world. Just like us, they would rather cling to their exclusion of those who are different or unfortunate instead of risking seeing themselves in the ones they were accustomed to holding at an arm’s length.

It’s really no wonder that the formerly possessed man begged Jesus to let him join the ranks of the disciples. He had found a community of people where he might have a chance at belonging.

Might he have heard himself in those words? “There is no longer possessed or of right mind, for all of you are one in Christ Jesus.”

But Jesus asked him to stay with the community that had excluded him. To stay as a witness to the saving power of God in Christ. To stay – and to be an agent of the incarnation in a land of complacency.

It’s an impossible vocation, this business of asserting one’s belonging in a world that only knows how to exclude. But he did it. “He went away, proclaiming throughout the city how much Jesus had done for him.”

At various times throughout our lives we all, to some degree or another, are either the redeemed former demoniac or the exclusive Gerasenes. When we are the redeemed, it is our job to proclaim throughout the city all that Christ has done for us. When we are the others, it is our job to endeavor to hear those we have called “other”, and to see the good work that Christ has done in them.

The words of the hymn have never been truer: “In Christ there is no East or West, in Him no South or North, but one great fellowship of love throughout the whole wide earth.”

My prayer is that we all, whether included or excluded from the communities of the world, may come to know that one great fellowship of love. Amen.