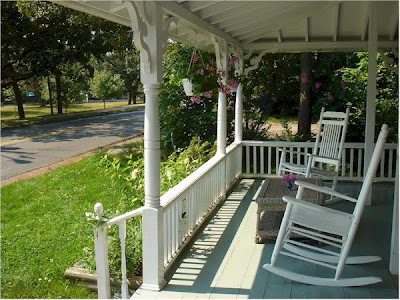 When the weather’s nice I like to sit outside on my porch. There’s just something about sitting outside that helps me to think more clearly. It’s my favorite place to read, or to talk on the phone, or just to sit in the quiet. It gives me a bit of a chance to meet and get to know my neighbors as they stroll by – walking their dogs or doing their laundry or going one place or another. We exchange pleasantries and after some time, we get to sample a taste of one another’s stories – the ordinary happenings that make up our lives from one day to the next.

It’s now getting into that time of year when you can just sit on the porch almost any time.

Yesterday afternoon I was sitting on the porch, admiring the fullness of the spring leaves for the early afternoon shade they provide, when it hit me – more than it had at any time up to now in the year: summer is just around the corner. You can feel it everywhere around us in the world. It’s certainly warmer, but there’s more to it than that. Things are starting to shift. Through the rituals of graduations and vacation planning; first trips to the pool and weekend barbeques, we’re already readying ourselves for something different. Maybe something a little slower and gentler than the rigors of most of the year. We’re starting to ease into summer.

The same kind of shift is happening in the church.

We’ve spent most of the year thinking about “special occasions”. The fast-paced life of people consumed with celebrations and commemorations and the preparations that they require. There was Advent, Christmas, and Epiphany. Which seemed to be followed all-too-closely by Lent, Easter, and Pentecost. Now, for the first time in a long time, we seem to be settling in to what’s supposed to be “normal”. We’re slowing down a bit and letting the preparations and worries of the special occasions of our faith rest for a while.

But while this is traditionally a time of year when the programs of the church begin to ease into their summer breaks, in many ways, the teachings of the church are just the opposite. We break from the cycles of commemorating the big events and milestones of the life of Jesus and settle into one of the primary reasons that we follow him: the stories of his teachings and miracles.

But the thing is, if Christmas and Easter have taught us anything, it’s that there are no “ordinary” times in the life of Christ. When Christ is alive, the extraordinary becomes the norm.

Today we hear one of these “ordinary” stories. Jesus and the disciples are wandering through the Galilean countryside. They happen upon an ordinary little town – Nain. It’s not a place of any particular historical or political significance. It’s the kind of place that you’d only happen upon on the way to somewhere else. The kind of place where unknown people live their usually unknown lives – with all of the joys and tragedies and everything in between that accompanies all of our lives.

It’s in this unexceptional time and place that Jesus and the disciples wander by.

Near the gates of the town they happen upon a funeral procession. A widow is mourning the loss of her only son. So caught up in her own indescribable grief, she probably doesn’t even notice Jesus and the others on the roadside.

So often when we hear the miracle stories of Jesus they are accompanied by proclamations like, “Go. Your faith has made you well.” The picture that is painted of Jesus is of one who endeavors, however unsuccessfully, to avoid being the focus. The writers of the Gospels know and convey the centrality of Jesus in the miracle stories, but they show a man who seems almost to wish he wasn’t so central to the story. One almost shy.

But this story is different. The mourning widow of Nain does not ask for healing for her son. She doesn’t even speak to Jesus. She is too overcome by grief to even imagine such a possibility. Instead, Jesus is compelled by compassion.

There are two aspects of compassion, as it is practiced by Jesus, that we should notice. First, compassion is always an avenue toward action. Compassion is never the end of the story. If it were, what we think of as compassion would be little more than pity. But also, compassion always requires the compassionate one to cross the threshold of discomfort before moving into a place where healing can begin. It certainly would have been easier for Jesus and the disciples to just look with pity on the mourning widow. They might have whispered words of pity for her from the edges of the roadway as she passed.

They could have done so with only a slight brush against the uncomfortable scene, then turned and continued down the road to wherever they were headed.

It’s the same with us today. I’m sure if you were to talk with the volunteers who serve the homeless at the Interfaith Hospitality Network they would tell you the same thing: it’s only after they confront their own discomfort with seeing suffering and commit to action that they can feed and be fed by their acts of compassion. It’s only in the midst of discomfort that they find God.

In the Eucharist we break the bread to remember that it is through brokenness that we are made whole.

When we work to ignore the brokenness that is very real in ourselves and in the world around us, we deny ourselves the opportunity for healing.

Where might we, with the mind of Christ, cross the lines of discomfort that we encounter in the world around us?

Pain and suffering and grief and estrangement are ordinary in the world. So is the discomfort that we feel when we encounter them. But so is the love of Christ. It’s so ordinary, that we, like the widow of Nain may not even notice it as we wander by. But in the midst of our ordinary discomfort, the extraordinary love of Christ reaches out.

Rise up out of the ordinary. Amen.
St. Paul's; Chatham