No need for hospitality 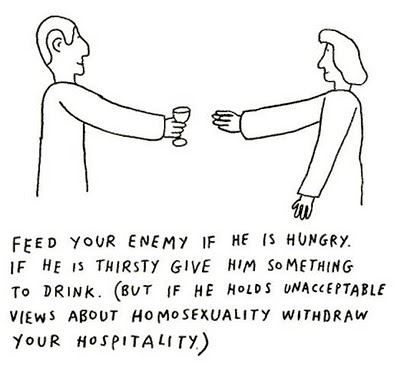 
In the name of God: our Protector, our Teacher, and our Guide. Amen.

There’s a conversation happening now on one of the email listservs that I read about baptism. In this “spiritual but not religious” age it seems that many religious leaders around the country are finding parents engaging in discussions about the ethics of baptism.

In our culture, which not so long ago was clearly dominated by Christianity and its social norms, baptism was once basically assumed. For most of us it was assumed that we would be baptized as infants. But even in those traditions that don’t believe in infant baptism, baptism was nonetheless assumed. It was just a matter of timing.

Now parents are beginning to ask, more and more, whether or not they “should” have their children baptized. Sometimes this questioning grows out of their recognitions of our increasingly plural culture – even devout parents are beginning to recognize that their children may or may not spend their lives living out the faith they inherited. Other times, however, parents question the ethics of baptism because they know, in their own hearts, that they don’t really believe. Perhaps, in their efforts at practicing their own “spiritual but not religious” belief systems they are drawn to the ritual of baptism in spite of its inherent religiosity. Perhaps they’re simply giving in to the pressures of their elders who still assume baptism – “We’ll just do it for grandma.”

I have to admit, that I’m somewhat torn about the debate.

On one hand, I steadfastly believe in the sacrament of Holy Baptism. Moreover, I recognize that universalism is one of the inherent qualities of Christ’s love. Whenever we participate in the sacraments – even when it’s “just for grandma” – even then, inward and spiritual grace is conveyed; for the ones who receive the sacrament as well as for the whole community.

On the other hand, if we’re not careful, universalism can breed complacency when it is not at least tempered with intentionality. Even the grandest, most beautiful liturgies filled with the most grace-filled sacraments won’t mean much if they are not borne on the wings of intentionality.

This is part of what we hear today in Paul’s Epistle to the Galatians: it is not “the works of the law” that save us. It is not our adherence to the right rules, or our participation in the right rituals, or anything that we can do that will bring us salvation. It is faith. Not doing, but being. Not ritual, but intentionality. It is the relationship between what we do and the underlying truth in our heart that spurs us to do it – whatever “it” is.

In the Gospel lesson today we hear the story of two hearts.

A Pharisee has invited Jesus into his home and to his table. In many ways, it’s a story about hospitality.

Hospitality is a biblical value, but in many ways, it’s one that has been lost to our modern, Western culture. As a culture, we don’t give a lot of value to the pursuits of hospitality. Too often, we associate it with domestic chores: cooking, cleaning – those things that, if we had the means, we would prefer to leave for others. When we do offer hospitality, it tends to be reserved only for those in our inner circles.

One of the reasons that the church is facing this “spiritual but not religious” age is because we have undervalued the role of hospitality in the Christian life. People have too often experienced, seen and heard the evil side of religion. We promise to “love our neighbors as ourselves”, but the flaws of our humanity intercedes. We build walls and fences and we draw tight little circles around the communities of “neighbors” we prefer.

Our promise to “love” comes with strings.

During my first year in seminary I worked as a student archivist at the archives of the United Methodist Church, which are housed in a library at Drew. In one of the projects that I was working on I encountered a series of photographs from the early 20th century documenting the missionary efforts of a group of Methodists in Asia. They had sent the photographs to the church’s Board of Global Mission to demonstrate their success in converting the local people to Christianity. They were “before and after” shots of the converted. In the “before” shots the people would be dressed in the traditional clothes of their Asian heritage. In the “after” shots, they would be dressed in European clothing – men in dark, three-piece suits, women in conservative, long-sleeved and ankle length dresses.

While that might seem to be an unnecessarily extreme example, it’s the same mindset of exclusion that contributes to our proclivity against hospitality today. Hospitality is not about welcoming those who are like us, or even about converting them to our ways. Hospitality is simply about welcome. No strings – just welcome.

In the story of the Pharisee and the sinful woman we see two approaches to hospitality. The Pharisee was a leader in his community, and he did the socially acceptable thing by welcoming Jesus into his home. But he only did just enough.

It was the sinful woman, however – not the righteous man – who really offered the grace of radical hospitality. While the man gave of a portion of what he had, the woman gave all that she had – even her very self. She washed his feet with her tears and dried them with her hair. The Pharisee, undoubtedly of substantial means, gave just enough. The woman, undoubtedly of humble means, gave even more.

But while hospitality is a spiritual discipline that merits our attention and our practice, it is not the goal. There is something more. Hospitality is simply a means to an end.

Hospitality is about welcoming others. But we are called through the example of Christ to break down the walls that divide us and to recognize that, in Christ, there are no others. We are one – with each other and with God.

The Dalai Lama said: “Because of the profoundly interconnected reality of today’s world, we need to relate to the challenges we face as a single human family.”

Whether oil spills or earthquakes or hurricanes or floods, we face the challenges of the world as one.

Despite the walls that we put up around our borders or around our hearts, we are one just the same.

The call of Christ is to recognize that oneness and to give of ourselves – of our possessions and of our hearts and of all that we have and are.

One of my favorite hymns has always been “My Shepherd Will Supply My Need”. In one of the verses, when the writer is imagining a world where all needs are met it says, “No more a stranger nor a guest, but like a child at home.”

In the community of Christ there is no need for hospitality or even welcome, because we all are home.

Like the forgiven woman in the Gospel today, we practice hospitality because it’s as close as we can come. Amen.
St. Paul's; Chatham